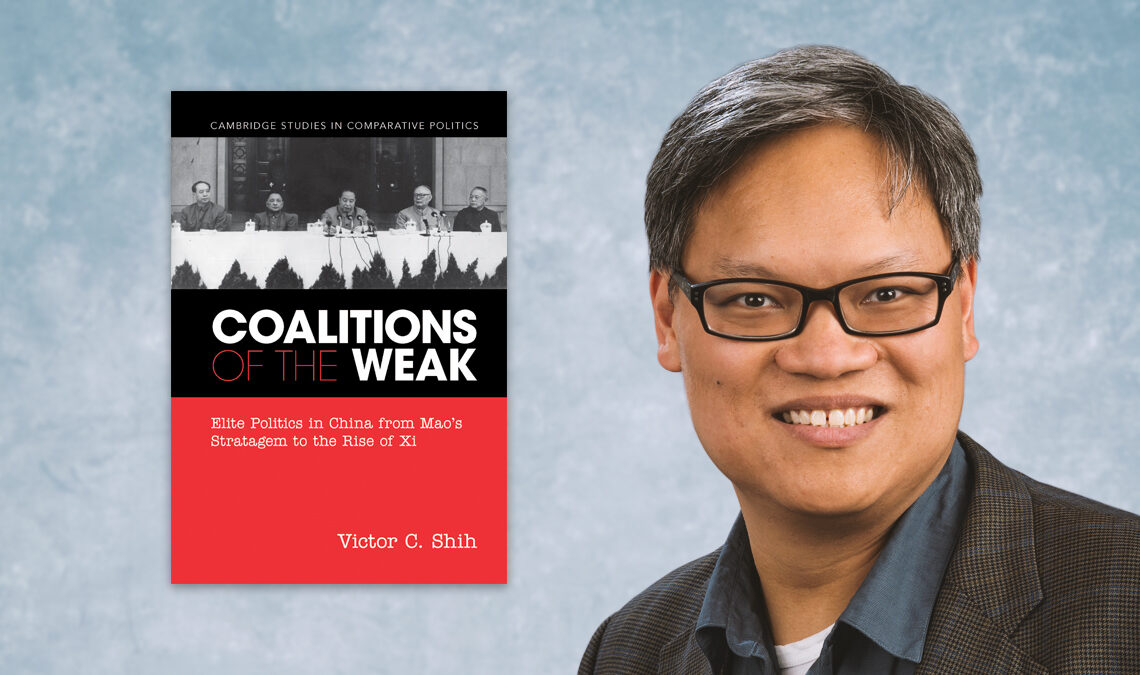 More than a decade ago, Victor Shih, who holds the Ho Miu Lam Chair in China and Pacific Relations at the UC San Diego School of Global Policy and Strategy (GPS), was working on a project gathering biographical data on the entire Chinese elite, and he made an unexpected discovery.

“I noticed that a group of generals avoided being removed during the tumultuous Cultural Revolution, which saw the purge of thousands of officials and generals in China,” Shih said. “What was even stranger was that these generals all had the damning label of ‘counter-revolutionary splittists’ in their files.”

So Shih began to ask himself: How did those generals survive when the stated goal of the Cultural Revolution was the removal of “counter-revolutionaries” from the party?

As Shih conducted more research, he realized that these generals were a part of Chairman Mao Zedong’s strategy for ruling China as he grew older and weaker. Mao formed what Shih coined a “coalition of the weak” in his twilight years to ensure that he would stay in power, with enormous implications for institutional development and subsequent politics in China.

Thus the idea for his latest book “Coalitions of the Weak” was born. In a Q&A, Shih explained some of the ideas in the book, including the wider policy tradeoffs that occur when power is consolidated into the hands of a single authoritarian figure.

“Coalitions of the Weak” will be released in early June, available via Cambridge University Press, Amazon, Bookshop or other retailers.

In this book, you discuss how Chinese President Xi Jinping could likely remain in power for life. If that holds true, what are the institutional and policy implications for China?

I am not sure what policies China will have, but the policy process will become increasingly ad hoc and de-institutionalized. The reason is that in a “coalition of the weak” setting, the top elites are informally very weak so they do not dare to build up the bureaucracies they oversee and have an independent policy agenda. That would risk the wrath of the dictator. Instead, they just carry out – sometimes only on paper – what the dictator orders. Without an exercise of power to define the authorities of various agencies, institutional development will be stunted. This was the case in the late-Mao period.

You took an in-depth look at late-Mao politics to write this book, informed by thousands of historical documents and data analysis. What was your most surprising finding in reviewing those documents and that data?

The most surprising part was the fact that dozens of “counter-revolutionary splittists” were appointed the most powerful military leaders in China. The literature never knew quite why they were so naturally obedient to Mao even as Mao grew sicker, but now we have an answer to this puzzle. They were just so vulnerable to charges of being traitors because they were traitors to the party.

Some people may think of authoritarian politics as simpler than democratic politics because one person or a few people are in charge. In fact, it is equally complex because of missing information about the partisanship of and the relative distribution of power among the elite.  Dictators have to use all kinds of tricks to meet this information gap so as to stay in power.  Forming a “coalition of the weak” is a key way of doing so, but there are obvious tradeoffs, such as institutional devolution. Of course, as Xi embarks on a course of ruling for life, he will grapple with the same challenge that Mao dealt with: the issue of how to stay in power for life and to know that he is in a relatively secure environment.

Do you have a particular section of this book that’s your favorite, or a part that was your favorite to research? What is it and why?

I really enjoyed writing the history of the traitorous Fourth Front Army because no one in the West had done any research on this, and it was fascinating to dig into the history. Even the literature in China on this group focuses on the historical narrative of what got them in trouble in the 1930s instead of an analysis of the role this group played politically during the late-Mao period. It was nice to unearth something totally new to both the Western and the Chinese literature on the Chinese Communist Party. Also, I really enjoyed doing research on and writing the last empirical chapter on the princelings since I had met a few of them personally, so the research felt more personal.

What is the intended audience for this book?

It is intended for an educated audience interested in the comparative politics of authoritarian regimes and Chinese political history. For a general audience, I recommend reading the first six pages of the introduction and then skipping to Chapter 2. One can then skip all of the political science jargon!

What projects are you tackling next?

I have a project on elite policy meetings in the Chinese Communist Party, as well as collecting data on the current leader of China, Xi Jinping.

Watch Shih’s May 5 book talk, hosted by the 21st Century China Center, below.