From book awards to the ‘Japan Zoominar’ 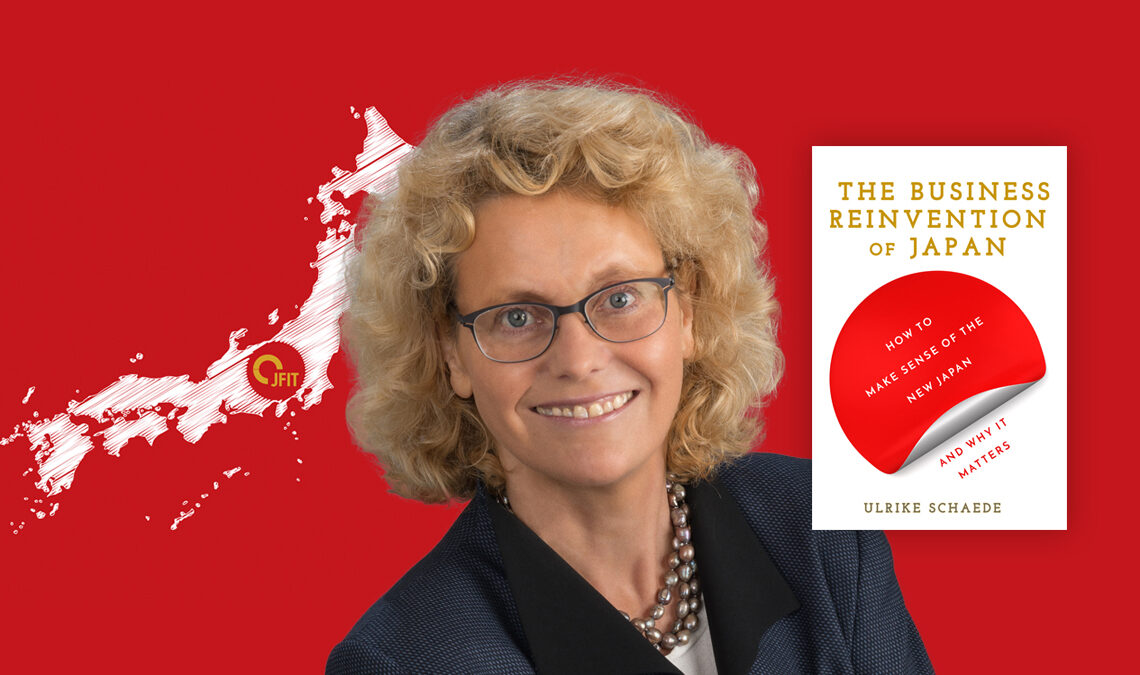 By all measures, Schaede has found international success on each front.

Her 2020 book, “The Business Reinvention of Japan,” recently received two prestigious awards: the 37th Masayoshi Ohira Memorial Prize and a silver medal in the 2021 Axiom Business Book Awards. Ohira was Japan’s prime minister from 1978-80, known for his international negotiation skills and global vision.

“The Masayoshi Ohira Memorial Prize is perhaps the highest book award in the Japan field. It is an annual book prize for outstanding work furthering regional studies and our understanding of the Pacific Basin Community,” Schaede said. “And the Axiom award is given under the motto ‘success through knowledge,’ which aims to celebrate books that offer the latest information to help business people meet the challenges of a fast-changing world. It is very gratifying to see that the book is well-received by two separate audiences.”

Her book will now be translated into Japanese and published by Nikkei, the leading business publishing house.

“I am told that the Japanese audience is curious how a foreign business scholar views the ongoing transformation in terms of global business strategies, corporate governance, financial markets, as well as corporate renewal and management and employment change for the 21st century,” Schaede explains.

Her latest Japan-focused project follows up on her work on “reinvention” and analyzes how demographic change and the digital transformation – what the Japanese call the “DX” – are likely to impact Japan.

Schaede added that usually, the aging society and the digital disruption are seen as separate, potential threats. Japan is a frontrunner in demographic change, as its society is now rapidly aging and also shrinking. This raises concerns of a labor shortage and a sustainable social security provision.

The digital transformation with AI, machine learning, blockchain, robotics and other autonomous systems is also often feared, including for its effects on jobs; people wonder, will robots replace all of us?

“But for Japan, the timing may well be fortuitous, as both of these negatives are happening at exactly the same time,” Schaede said. “So we can think of this as a ‘lucky moment’ when the DX offers a solution to the growing labor shortage, and the shrinking society lowers the fears of the DX.”

She went on to explain that in many of Japan’s traditional industries – for example, in multi-layer wholesaling – the average age of small firms CEOs is over 75. They cannot find successors for their low-tech businesses. Now, blockchain-based logistics, etc., are about to disrupt these industries just at a time when the aging society reduces the labor available to work in such traditional jobs. The two are the solutions to the main problems each creates.

“Some of the questions I’m thinking about include: What can we learn from Japan about income inequality and societal cohesion and stability? Can capitalism be good for all? How is that done in Japan? The social responsibility of Japanese companies is very different from that in the U.S., but can this be upheld in an era of global competition and global finance?” Schaede said.

On the instructional front, she teaches in two main areas: a capstone course called Strategy and Negotiation, as well as two Japan-related courses, Business and Management in Japan, and Innovation and Entrepreneurship in Japan.

Although teaching her highly interactive classes in a remote-learning environment posed some challenges, Schaede said the students have been “absolutely terrific.”

“I think we will all come out of this with a renewed appreciation of the relevance of ‘soft teaching’ as well as our school’s ‘soft tissue’ – namely, that the graduate program at GPS is, of course, about the rigor of the curriculum and class content – but it is more than that,” Schaede said. “It’s also the style of interaction and the mentoring we provide, especially in our global context here at the school, and the friendships, the connections, the teams and the support groups.”

A Window of Opportunity: Developing the ‘Zoominar’

As the COVID-19 pandemic upended the world in many ways last year, Schaede seized the moment to brand a new weekly webinar series for JFIT: the Japan Zoominars @ UC San Diego.

“When the COVID-19 lockdown started last March, I saw a window of opportunity. Working from home did two things: it lowered everybody’s expectations of quality in sound and image, so the virtual seminar didn’t have to be perfect. And it gave people time and opportunity to attend,” Schaede said. “I picked a time that would work in California and Japan – 4:30 p.m. on Tuesdays here, and Wednesday mornings in Tokyo.”

The “Japan Zoominar” series was launched on April 28, 2020, and other than a break during December, it has aired weekly. In total, it has attracted over 5,500 live viewers and more than 12,000 subsequent views of the recorded sessions.

The point of differentiation is that the webinar series is not so much a presentation but a conversation.

“Rather than long monologues, I wanted to create something that could also be listened to as a podcast. The result is a very high-level, academic, Japan-focused ‘talk show,’ if you wish,” Schaede said. “I have one or two guests, who may have a recent publication or new initiative to showcase. With others, we discuss their broader research themes or a current topic relevant for the U.S. and Japan. We prepare beforehand to ensure that it has sufficient depth, but because it’s a conversation, we never know where we will end up.”

Audience members can ask questions during the events, and she works to weave those questions into the conversation.

“Often it’s the listeners that drive the plot,” she said.

The webinar topics rotate through four categories: business and economy; politics; society; and arts, culture and more – meaning there is no dearth of topics for Schaede and her guest speakers to explore.

“So far, we’ve covered topics in management, government, energy, the environment, the Olympics, Suganomics, business culture, social policies, womenomics, contemporary art, Japanese literature and cinema. We have also reviewed Ruth Benedict and looked at Japan’s geo-political and geo-economic strategies in Asia,” Schaede said. “Of course, the pandemic has also raised many questions – not just public health implications and politics, but also what ‘working from home’ means for Japanese employment practices and the economy.”

This summer, JFIT will work to create a “JZ Gallery” on their website to organize the more than 50 videos into the above categories.

“This may also offer an opportunity for my colleagues to use the conversations as ‘meet the author’ clips for teaching,” Schaede said. “It’d be great if it could prove useful.”

Schaede said the reception of the webinar series has been “nothing but astounding.”

“When I started this academic venture, I determined that I would continue until I had fewer than 30 listeners or ran out of speakers and topics,” Schaede said. “The opposite is the case: our numbers are growing almost weekly.”

Generally, one third of the audience is in Japan, with another third made up of academics, students, alumni and the GPS community in the U.S., and the final third tuning in from other countries across the world.

“Pulling in new folks is great. And I am particularly touched by the fact that there are quite a large number of repeat attendees. It is becoming a community,” Schaede said. “This is one of the most rewarding things I have started. It’s not just that the Japan Zoominars have given us a way to stay in touch with colleagues, friends, alumni, students and community supporters through these difficult times, it has also connected us to new people around the globe. We could never accomplish this in a live setting – as much as that, of course, still has its own advantages.”

As pandemic restrictions ease and people’s schedules become busier, Schaede said she may consider changing the frequency of the webinars to every other week – but she said she’ll let demand and audience feedback guide that decision.

“Who knows? They may enjoy listening to us while stuck in a traffic jam,” she said. “I am having so much fun and am learning so much, I don’t think I want to stop it any time soon. We will take a short summer break, though, to avoid competing with the Tokyo Olympics.”

By GPS Media
1 Mins read
Teevrat Garg, associate professor at the UC San Diego School of Global Policy and Strategy (GPS), has been elected to the board of directors of the Association of Environmental and Resource Economists (AERE), the leading professional economics organization working in the areas of climate change, environmental policy and energy transitions.
×
Research