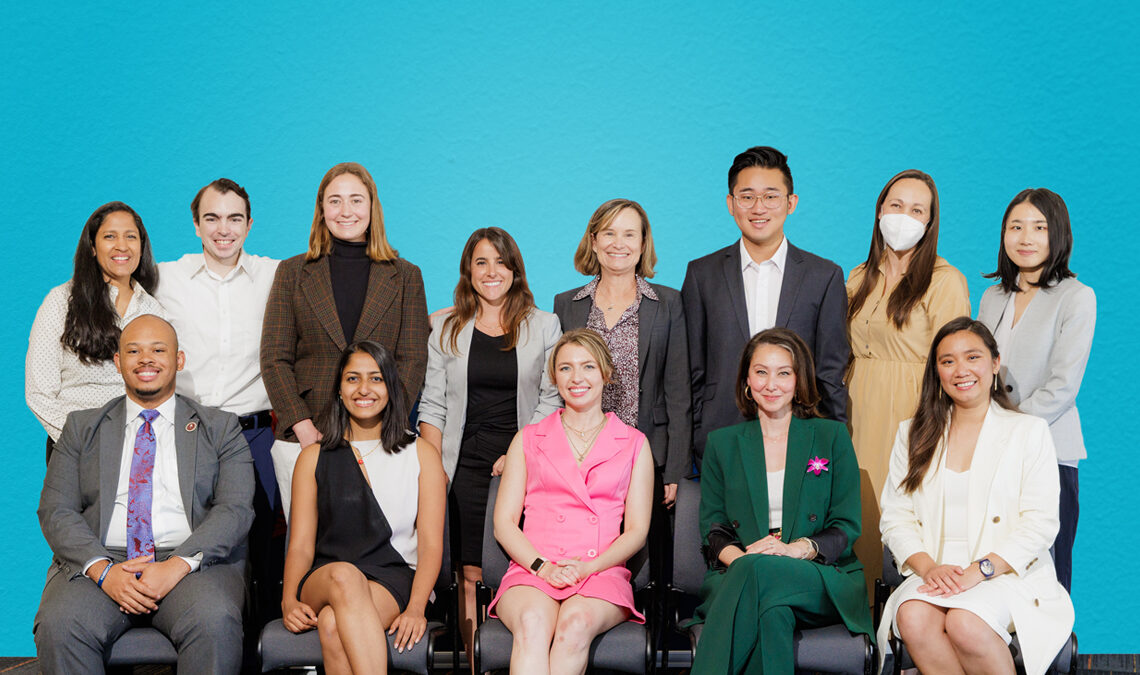 Dean Caroline Freund and award winners at the Student Awards Luncheon May 13.
PDFPrint

Students receive numerous accolades for research, grades and giving back to their fellow students

For the first time since 2019, the UC San Diego School of Global Policy and Strategy (GPS) was able to honor its best and brightest in person during the annual student awards luncheon, held May 13 at The Forum in the Price Center.

“I am so thrilled to have the opportunity to come together in person and celebrate our extraordinary students and their achievements,” said GPS Dean Caroline Freund. “Over the past year, our students have thrived, despite many challenges.”

Freund extended a heartfelt thank you, on behalf of all the faculty and staff, for their dedication in giving back to fellow students and the school.

“Grade point averages are a reflection of a student’s commitment to mastering the curriculum and their dedication to the coursework,” Freund said.

Freund also announced the winner of the Joseph Grunwald Award, Tomás Lavados. Grunwald, a former professor, was a strong advocate of political and economic cooperation throughout the Americas, a characteristic Lavados embodies, Freund explained.

Though Lavados could not be in attendance, Freund applauded Lavados’ achievements during his time at the school.

“He exemplifies the GPS ideals of building a deep understanding of analytical tools and putting them to good work in the world,” Freund said.

Instructor Sandra Pedregal presented the Language Achievement Award, which is awarded to a graduating student for outstanding achievement in language study. This year’s winner was Grace Pevehouse.

“When Grace started studying in the fall, she asked specifically what she needed to do to better her language abilities,” Pedregal said. “At the beginning of each quarter, she set up an appointment to ask me the same question. She has tirelessly worked on specific tasks and strategies, dedicating her time and effort during these difficult times toward this goal…and her efforts have paid off.”

Several students were honored for their outstanding contributions to research during the ceremony.

Nora’s paper focused on the associations between extreme heat and preterm birth in Brazil, and Bagaria’s paper examined the question of whether expanding electrification led to groundwater overdraft when farmers have the ability to pump water.

“Together these two papers really showcased how empirical statistical methods can be used to understand the connections between human and natural systems,” Burney said.

Burney also handed out the Richard Covington Award, which is given to an outstanding empirical paper that the faculty selection committee believes could be publishable in a high-quality academic journal. The winner not only receives a monetary prize but also receives feedback and support from faculty to bring the work into a publishable format.

“This is a really important question that comes up all over the world, whenever large groups of immigrants or refugees or asylees resettle in their new home territories,” Burney said.

Continuing the honors for outstanding papers, professor Elizabeth Lyons presented the Ruth Adams Award, which is given to the best qualitative paper, to Joshua Robert Walker for his paper on regulatory responses to cyber-related threats to U.S. electrical grids.

Professor David Fortunato announced the winner of the inaugural Policy Memo Award, a new prize that recognizes a well-written memo analysis by a student in their first year of studies at GPS. Fortunato noted that the winner, Marissa Myers, was honored for her thoughtful memo exploring how the changes in governing institutions at GPS could lead to better representation of diverse interests at the school.

Another important accolade honored during the ceremony was commitment and service to the GPS community.

On behalf of the Class of 2023, Myers presented the Dean’s Teaching Award to Swati Nair.

“There is never a question too simple, nor a STATA code too complex, that Swati cannot magically make work,” Myers said. “From the Class of 2023, thank you for all of your guidance, support and love.”

Myers also announced Peter Wilborn as the winner of the Doming Liu Award, which recognizes a first year student for their achievements and contributions to the GPS community.

“Peter has this contagious, positive energy, and you can’t help but feel lucky to work with someone like that,” Myers said. ‘He goes the extra mile – quite literally sometimes. Who do you think picks up all that food from UTC?”

“Her classmates describe her as a humble, considerate and talented person whose natural leadership abilities shine through and whose professionalism at all times exemplified the best qualities of both U.S. military officers and GPS students,” Osborne said.

McKenzie Richardson was named the winner of the Ayal Margalith Memorial Award, which honors students who go above and beyond to demonstrate leadership, compassion and devotion to their community.

“Through her work advocating for students, leading GOGPS and creating educational and social opportunities inside and outside GPS, McKenzie has helped strengthen our GPS community and created meaningful experiences and memories for GPS students,” said Alejandra Guzman, who presented the award.

Richardson, in turn, announced Belinda Panelo as the student chosen as the class commencement speaker.

“Belinda is someone our cohort looks to as a muse of inspiration when we need a reminder that we can be bold and take on challenges in pursuit of what we are passionate about,” Richardson said.

The Class of 2022 also honored professor Barry Naughton with the Faculty Recognition Award.

“In the words of many MCEPAs, Professor Naughton has always been a grandpa to us,” said Jorge Mata Ochoa, who presented the award. “He has a warm and personal touch when it comes to teaching students. Students are never afraid of making mistakes in front of him, and his constructive criticism has helped us not only as students but as people.”

View photos from the luncheon here.

By Virginia Watson
4 Mins read
Check out our faculty’s picks for their favorite recent read, from a revelatory book about the pre-Columbus Americas to one focusing on the creative process of songwriting
EventsFacultyResearchStudents

By Christine Clark
15 Mins read
Students and faculty from Scripps Institution of Oceanography and School of Global Policy and Strategy prepare to attend COP27 in Sharm El-Sheikh, Egypt
×
DegreesEventsStudents

Resilience defines the Class of 2021