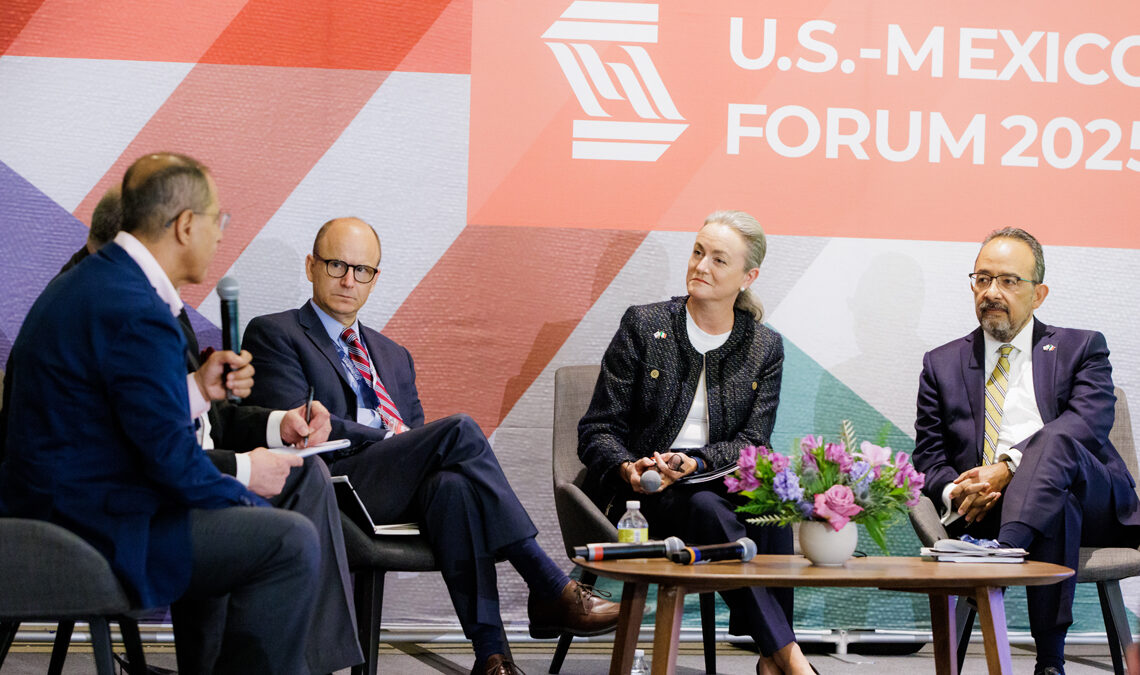 Mexican and U.S. scholars, practitioners and experts gathered June 1-2 for the U.S.-Mexico Forum 2025 to rethink and propose a course of action for the countries’ bilateral relationship in the coming years.

Hosted by Center for U.S.-Mexican Studies, a research center at the UC San Diego School of Global Policy and Strategy (GPS), the U.S.-Mexico Forum 2025 assessed five key areas in the bilateral relationship: security and public health; trade, economy and work; energy and sustainability; migration; and strategic diplomacy. The event was also supported by the University of California Alianza MX, Otay-Tijuana Venture, L.L.C., Sempra Infrastructure and Volaris.

“The U.S.-Mexico Forum offers a unique space to foster dialogue among policymakers, business leaders and academics, with the goal of developing concrete proposals to improve collaboration between Mexico and the U.S. in key areas,” said Dean Caroline Freund.

Through the closed-door session, experts developed a number of key takeaways and policy proposals, with a public report forthcoming.

Award honors those fostering cooperation between the U.S. and Mexico

As part of the forum, the center also presented the inaugural Jeffrey Davidow Good Neighbor Award. The award was named in honor of Davidow, a former U.S. ambassador to Mexico.

The award is given to two recipients in different categories: Public Policy and Lifetime Achievement.

The first category refers to the implementation of a successful public policy that benefits both countries. This year’s Public Policy award was given to the four institutions that oversaw the vaccination of more than 100,000 Mexicans along the San Diego-Tijuana border. The awardees were the General Consulate of Mexico in San Diego, UC San Diego Health, Consejo de Desarrollo de Tijuana and the San Diego County Health Department.

“This initiative is extremely important because it was the first vaccination model and is an extraordinary example of U.S.-Mexico cooperation,” Fernández de Castro said.

For the Lifetime Achievement category, the recipient is chosen based on their work, leadership and initiatives that have contributed to deeper integration between the U.S. and Mexico.

This year’s recipient was Jose Galicot, founder of Tijuana Innovadora.

“Thanks to his work for over 12 years, Galicot has contributed to improving the narrative of Tijuana and San Diego, thereby fostering regional integration,” Fernández de Castro said.

By Virginia Watson
4 Mins read
Check out our faculty’s picks for their favorite recent read, from a revelatory book about the pre-Columbus Americas to one focusing on the creative process of songwriting
×
CommunityFacultyResearch