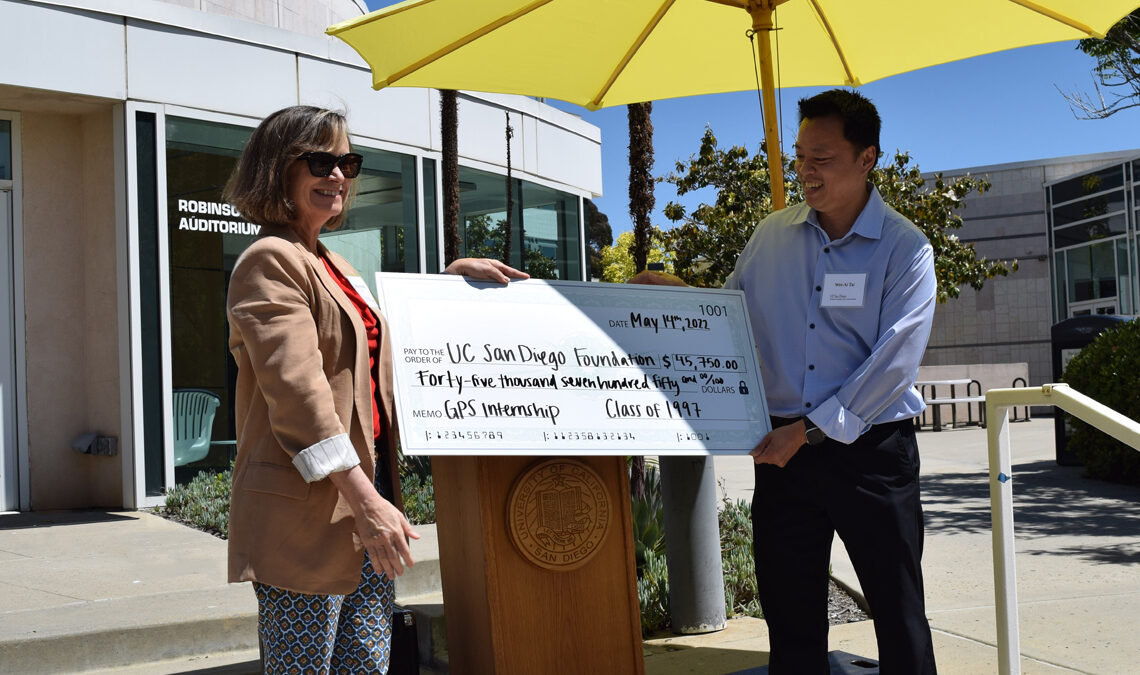 The Class of 1997 presented a check for the funds they raised toward a special internship fund to Dean Caroline Freund during their 25th reunion event in May. | GPS Media photo
PDFPrint

In honor of their 25th reunion, the UC San Diego School of Global Policy and Strategy (GPS) Class of 1997 chose to give back to the school in a way that will support students for years to come: raising more than $45,000 for a special internship fund.

“We wanted to commemorate our 25th reunion in a special way and give back to GPS to benefit current students,” said Wendy Dougherty, one of the reunion organizers. “I know how important it was for me to have an internship experience that provided me work exposure in my related field of study and the opportunity to work overseas. I think it is important that students who want to pursue an internship should not be limited by their ability to pay travel and living costs.”

The class aimed to raise enough funds in order to support more than just a one-time gift; their goal was to support internships that would benefit multiple students over several years.

Wei-Ai Tai, who helped to spearhead the fundraising efforts among the class, said he originally brought up the idea of a class gift during a Zoom call with the class in October 2021.

“My inspiration came from my mentor Charlie Robins when I was a student at GPS,” Tai said. “Charlie was a great philanthropist, and he donated to many different programs when I was in school, and I felt like it was my turn to do something. Someone always has to take the lead for these types of projects, and I felt it was my duty to do so in order to honor Charlie’s memory.”

Tai said he hopes this gift will inspire further giving from other GPS alumni.

“The 25th reunion is a major milestone, and I felt it was important for us to seize the opportunity and do something publicly so that other classes could emulate the class gift,” Tai said.

“GPS is a place where our students come first, as evidenced by the ongoing bond shown by our dedicated alumni,” Freund said. “Though knowledge-building is in our DNA, our goal first and foremost is to have a positive impact on the world around us.”

The Class of 1997’s donation has already made an impact on a current GPS student: Master of Public Policy (MPP) candidate Clayton Haglund received funding this summer for his internship at the Intertribal Court of Southern California.

“A large part of my work as an MPP student is championing Native access to political self-determination, and the funding I have been given to intern at the Intertribal Court is instrumental in getting me one step closer to fulfilling this purpose,” Haglund said. “The relationships and skills I am developing will stay with me for a very long time, and I will never forget the Class of 1997 for giving me the opportunity to take part in this.”

Many in the Class of 1997 said their internships were foundational to launching their careers post-GPS.

Dougherty shared that the internship funding she received as a GPS student – which allowed her to take an internship with Project Concern International on a USAID-funded health project in El Salvador – was integral in her pursuit of a career in international development.

“This internship gave me direct experience working on international development projects that helped me to get a job in Washington, D.C. after graduating,” Dougherty said.

Tai spent the summer between his first and second years at GPS interning in Taipei, Taiwan.

“I worked for an executive search company and learned more about the search/interview/hiring process, which came in handy when I went through the job search process after graduation,” Tai said. “I also used my Mandarin language skills extensively during the summer, which again was very useful once I entered the workforce.”

On May 14, around 20 members of the Class of 1997 gathered in the GPS courtyard for a special reunion event. Freund shared with class members how GPS is positioned among the top graduate programs in global policy, and professor Emilie Hafner-Burton spoke to the class about her research in democracy and human rights around the globe.

“Our close-knit group of classmates spent some time after the event socializing and catching up,” said Erica Levesque, who also helped to organize the class gift. “It was amazing to see the contributions that our class is making in the fields of education, public policy, global business, technology and more.”

Dougherty said GPS has positively impacted her life over the years, both personally and professionally. She has not only maintained a strong bond with her classmates but also relied on GPS’s Alumni Affairs group to facilitate professional connections.

“I felt a strong connection to the students at GPS due to their global perspective and diverse life experiences,” Dougherty said. “I have appreciated that GPS alumni form a great network that I have called on when I moved from Washington, D.C. back to California, and I have reciprocated. I extended the opportunity for students to get an internship as well as several positions at a company I worked for.”

Tai not only met his wife, Cathy Yeung, at GPS; he got his first job through the referral of a classmate, helping him to build a successful career in Silicon Valley, and forged a number of personal friendships through the program, many of which he still maintains today.

“That personal network has been very important to me, and I am grateful to have many friends around the world,” Tai said.

Freund noted that GPS’ alumni represent the school’s past, its present and a key part of its future.

“We are thrilled to carry the school into the future, building upon GPS’ established excellence, and I pledge that we will continue to make GPS a place you are proud to call home,” Freund said. “We appreciate our alumni’s continued support through this exciting time.”

By Virginia Watson
3 Mins read
Commencement ceremony honors graduates’ accomplishments, with an eye toward the challenges for which the school’s training has prepared them
×
AlumniCareers