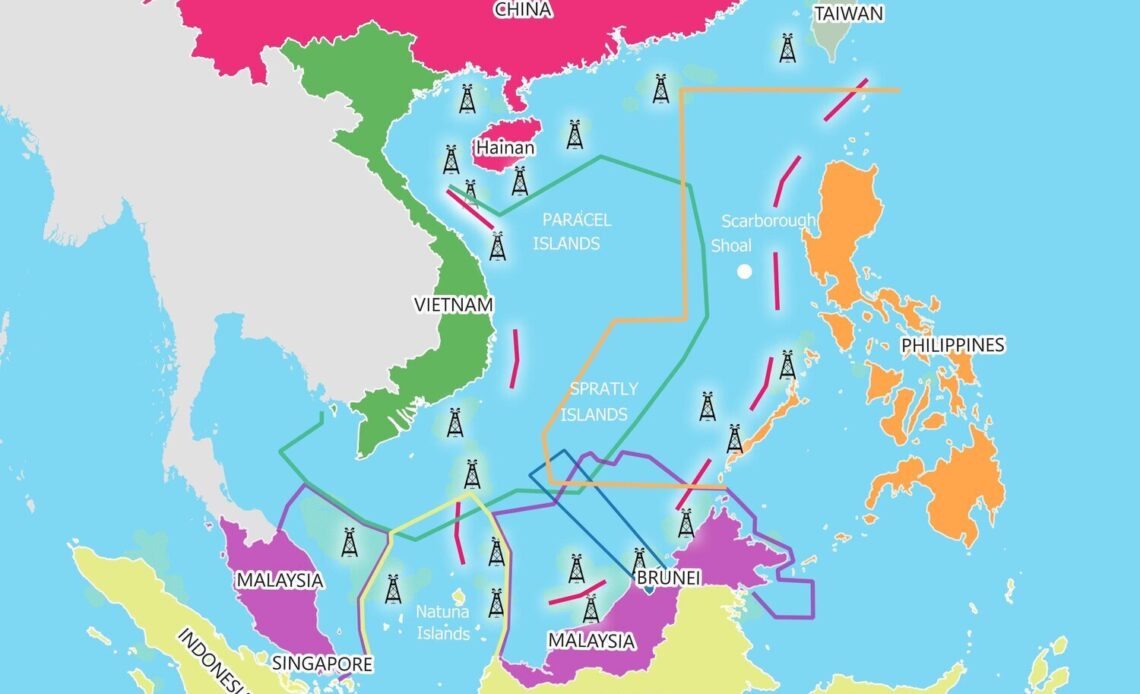 Assistant professor Nico Ravanilla is researching the dynamics of conflict in the South China Sea, including how China, Vietnam and the Philippines in particular have been responding to global economic and political events in recent years. | Graphic provided by Nico Ravanilla and SCSDI
PDFPrint

In the spring of last year, Nico Ravanilla, an assistant professor at the UC San Diego School of Global Policy and Strategy, was in the midst of a field experiment in the Philippines. He and other researchers were evaluating the impact of a program called Usap Tayo (“Let’s Talk”), which sought to improve services in conflict-affected villages and build trust between government service providers and elected village leaders.

Ravanilla was scheduled to travel to the Philippines during the first week of March 2020. Then, the novel coronavirus pandemic struck.

“That week, President Rodrigo Duterte decided to put the country on lockdown, and no flights were allowed in. Luckily for me, I hadn’t yet left the U.S., or I would have been stuck in the Philippines for several months,” Ravanilla said. “Once it was clear that the lockdown was not going to be lifted anytime soon, we had to come up with creative ways to keep the program running.”

The COVID-19 pandemic presented a unique opportunity to test whether Usap Tayo’s confidence-building activities induced leaders in these villages to share information they otherwise would not have, Ravanilla explained.

“Immediately after the government’s lockdown order, the regional police leadership initiated an effort to gather data from village leaders about local risk factors crucial to the spread of COVID-19 in order to aid the region’s inter-agency COVID task force,” Ravanilla said.

Ravanilla said the team switched quickly to remote, one-on-one meetings by phone rather than in-person meetings in order to continue the research.

“It’s not an ideal substitute for the in-person program interventions, but it certainly kept our research team and respondents safe and free from harm,” he said.

Ravanilla and his colleagues found that leaders from villages who participated in the Usap Tayo program were 20% more likely than leaders in control villages to respond to the task force with timely COVID-19 risk information. A paper with details of the study is forthcoming in the American Political Science Review and – given the relevance to the ongoing pandemic – is open access, meaning it is available at no cost to scholars, policymakers and other interested parties.

“This finding implies that efforts to lay a groundwork of trust with local leaders can play an important role in determining whether cooperation happens once a crisis occurs,” he added. “This is important because disease and disaster response in conflict zones is hard due to low community trust, with tens of thousands of lives lost each year.”

Ravanilla, whose research focuses on improving governance by enhancing the quality of elected governments in developing democracies, was awarded a UC San Diego Faculty Career Development Program (FCDP) grant for the 2020-2021 academic year. The award granted Ravanilla two course reliefs, which meant that after teaching two courses during the fall quarter, he will be able to devote his focus to writing and sending manuscripts for review during the winter and spring quarters.

“I’m really grateful that I was a recipient of the FCDP grant in the time of the pandemic. It was a huge help in terms of freeing me up from teaching duties to conduct my research,” Ravanilla said. “I’m grateful that I am part of an institution that looks after its junior faculty this way.”

Ravanilla has already worked to dedicate his additional time to continued research, such as that shared in the recently published paper “Deadly Populism: How Local Political Outsiders Drive Duterte’s War on Drugs in the Philippines” in the Journal of Politics, and another forthcoming paper to be published in the American Journal of Political Science, “Brokers, Social Networks, Reciprocity, and Clientelism.”

Ravanilla said he is watching the new administration closely, as he will need to follow the diplomatic stance of President Joe Biden’s administration on issues surrounding South China Sea disputes – the subject of another ongoing research project.

“The South China Sea region, at the core of a rapidly growing Asia Pacific, has experienced growing levels of conflict in recent years due to overlapping maritime claims between Vietnam, the Philippines, Malaysia, Brunei, Indonesia and China,” Ravanilla said. “The stakes could not be higher for understanding the dynamics of conflict, including how China, Vietnam and the Philippines in particular have been responding to global economic and political events in recent years with respect to the South China Sea region.”

In a new project called South China Sea Data Initiative, which is supported by the Carnegie Corporation of New York and the National Science Foundation, Ravanilla and his collaborator, Renard Sexton of Emory University, are taking advantage of the big data revolution to fill two important research gaps.

“First, we will generate a multi-faceted dataset that will allow us to answer important questions about maritime conflict in the era of globalization,” Ravanilla said. “Second, although theorists have offered many competing accounts for what to expect in the region as China grows, there has yet to be a compelling empirical investigation of what has taken place since 2010, when China’s militarizing activities escalated. Our study will use the best available techniques of causal inference, given the observational data.”

Ravanilla was initially scheduled to travel to Southeast Asia during the winter quarter to conduct in-depth interviews of key informants, but his travel plans are on hold because of the pandemic.

“In the meantime, we continued working on building the maritime conflict-related event dataset and started focusing on the multi-country public opinion survey part of the research project, since it can be implemented online without us needing to be in Southeast Asia,” he said. “We plan to pilot the public opinion survey in the coming weeks, which should still keep us in track to having an initial draft of our manuscript ready before the year ends.”

As we edge toward the conclusion of the pandemic, Ravanilla said he plans to stay busy writing up a number of manuscripts to report the results of several research projects.

“Thankfully, all but one of the field experiments that I implemented these past few years have concluded, and all that’s left to do now is write up the manuscripts reporting the results,” he said. “We’re also planning to turn the South China Sea Data Initiative into a book project, so I’m also looking forward to getting started on that. As for that one field experiment that was halted because of COVID, we are planning to wrap it up by June this year – but again, it all depends on the ability of our research team to safely engage in research.”

To learn more about Ravanilla’s ongoing research, visit his website.

Charting the future of global trade

By Virginia Watson
6 Mins read
Center for Commerce and Diplomacy conference draws together leading minds, including the prime minister of Jamaica and the former CEO of General Electric, to chart a course for the next era of international integration putting domestic needs, climate change and national security front and center
×
FacultyResearch