Want a bachelor’s and master’s degree in only 5 years? GPS may have the perfect option for you 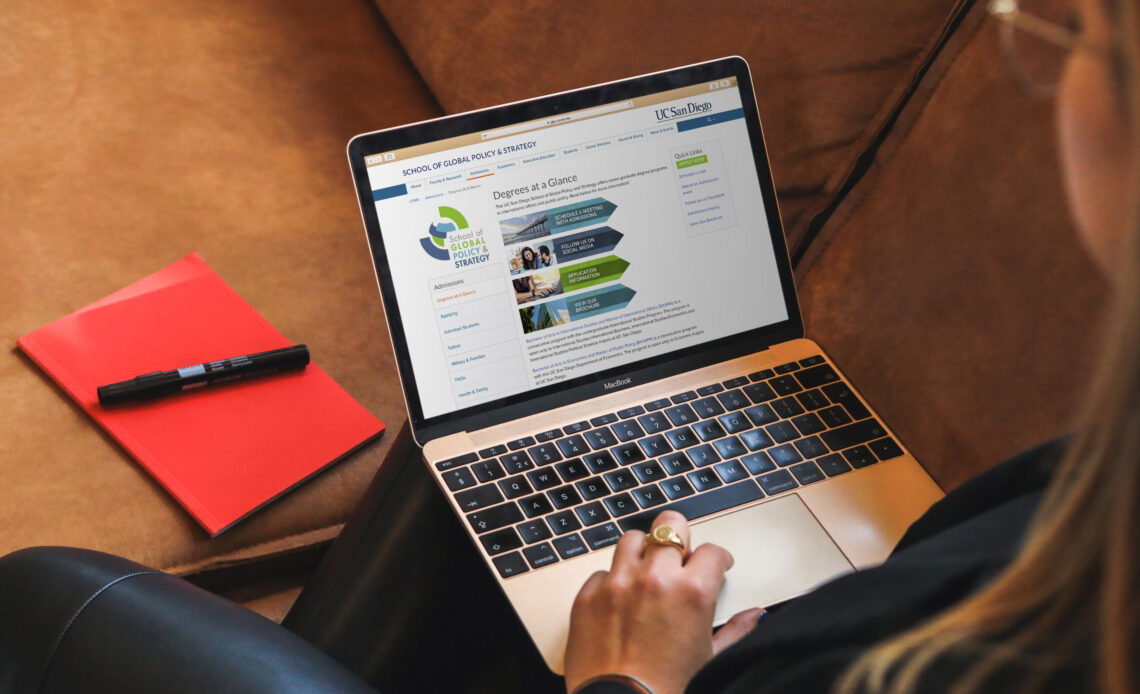 Offered in conjunction with UC San Diego’s International Studies Program (ISP), undergraduate students majoring in international business, economics or political science are eligible for the Bachelor of Arts in International Studies and Master of International Affairs (BA/MIA) program. Once accepted, students incorporate graduate-level coursework into the final undergraduate year of study with an additional year of graduate coursework after completion of the bachelor’s degree. Like the 2-year MIA program, students in the BA/MIA program select one career track and one country/regional specialization (China, Korea, Japan, Latin America or Southeast Asia).

The Bachelor of Arts in Economics and Master of Public Policy (BA/MPP) degree is a consecutive program with the UC San Diego Department of Economics. BA/MPP students must declare at least one area of specialization and complete a second year capstone course with a substantial research project, in addition to the first-year core classes.

In Fall 2021, and in collaboration with the UC San Diego Department of Political Science, a new 5-year concurrent degree will be offered for political science majors and tied to the 2-year MIA program at GPS.

Candice Wang Yu, a 2010 graduate of the BA/MIA program who now works as a business development adviser for Shell New Energies, learned about the program as an undergraduate, around the time she returned from studying abroad in China.

“The idea of an expedited graduate degree in international affairs was attractive to me because it would provide the opportunity to strengthen my analytical skills and gain more work experience before entering the job market,” Yu said. “In hindsight, I am extremely grateful for the timing of the program because shortly after my decision, the U.S. entered the Great Recession, and the scarce job market for college grads became even more competitive.”

Rachel Finerman, a 2020 graduate of the BA/MIA program, said she chose to attend UC San Diego with the intent from day one to pursue one of GPS’ 5-year degree programs.

“I knew I eventually wanted to get a master’s degree, and I also had a passion for and interest in China, Chinese culture and U.S.-China relations. Of course, GPS is an excellent place to pursue these interests,” Finerman said. “Although I couldn’t apply to the program until my third year as an undergrad, I chose to attend UC San Diego not only for its excellent undergraduate international studies program, but also because I felt GPS was an ideal graduate school for the career path I wanted to pursue.”

Finerman, who now works as a customer operations specialist for the Finnish microsatellite manufacturer and Earth Observation data provider ICEYE, said she likely would not have found herself at the company “if it weren’t for GPS’ excellent geospatial analysis classes.”

“I discovered the geospatial field at GPS and wanted to pursue a career in the field based on what I learned and got to accomplish in the GIS and Remote Sensing classes,” Finerman said. “If I hadn’t done the BA/MIA program, my trajectory would have looked very different, but I found my passion in my last year of the program and feel really lucky to get to work in this field.”

BA/MIA ’20 graduate Raymond Kao came to UC San Diego with an entirely different career path in mind – one he very quickly changed during his freshman year.

“I came into UC San Diego as a philosophy major with the intention to be a lawyer, but I decided that studying law wasn’t for me,” Kao said. “I pivoted to the ISP program in political science because of my immigrant background and my interest in diplomacy and problem solving.”

Kao said the 5-year program was very enticing to him because of the added value in completing both degrees in less time.

“Skipping the GMAT and saving an extra year – in terms of time and tuition! – definitely played a large part in my decision,” Kao said.

Kao, who graduated in 2020, is now a Presidential Management Fellow at the Centers for Disease Control and Prevention in the Division of High Consequence Pathogens and Pathology.

“I am a health policy and issues management analyst – simply put, I help to write policy and briefings related to the management of diseases that fall under my division’s purview, like ebola, smallpox, rabies, brucellosis, etc.,” Kao said. “This touches everything from vaccines to epidemiology to biosecurity. It’s more encompassing than I had initially guessed, and I’m having a great time constantly learning.”

While Finerman and Kao decided to pursue a 5-year degree through GPS early in their undergraduate careers, BA/MIA ’15 graduate Ziwen Han was much further along in her studies when she considered pursuing the joint degree.

“Actually, my TA from the Portuguese class that I took during my junior year at UC San Diego recommended this program to me, since he was also an MIA student at GPS during that time,” Han said. “Besides, I lived in the International House – which is super close to GPS buildings – during my junior year, and I got to have lots of opportunities to attend the events hosted by GPS and meet awesome students.”

Han, a product manager at China Merchants Bank in Shanghai, said UC San Diego’s international reputation, along with the training she received at GPS, has contributed greatly to her career success.

“The global perspective that I learned in the GPS program has equipped me to help expand CMB’s partnerships with multinationals in China,” Han said. “In addition, the wonderful staff at the GPS careers office provided me abundant job search and interview preparation skills that really helped me in receiving different job offers in both America and China.”

The focus on quantitative methods – a central tenet of GPS study – also helped set him apart from other candidates when applying for jobs, Kao added.

“I had a good understanding of international relations, processes and institutions before coming to GPS, but the level of detail and analysis at the graduate level gave me the depth I needed to really excel,” Kao said. “I was not quantitatively focused in undergrad, so coming to GPS and learning statistics and coding provided me with hard skills to show off and be a more attractive candidate.”

Along with increasing his quantitative skills, Kao said GPS opened him up to a number of leadership opportunities that prepared him to be successful in the workplace.

“Being able to serve as a first-year representative and subsequently the president of the student body really allowed me to hone my soft skills like communication, leadership and conflict management,” Kao said. “Without those soft skills, I don’t think I would have been a Presidential Management Fellow and gotten to where I am now.”

By Virginia Watson
5 Mins read
Jay and Lisa Hanson, both graduates and longtime supporters of GPS, named this year’s outstanding alumni for their continued contributions to the school
×
Degrees

Is the MIA degree right for me?