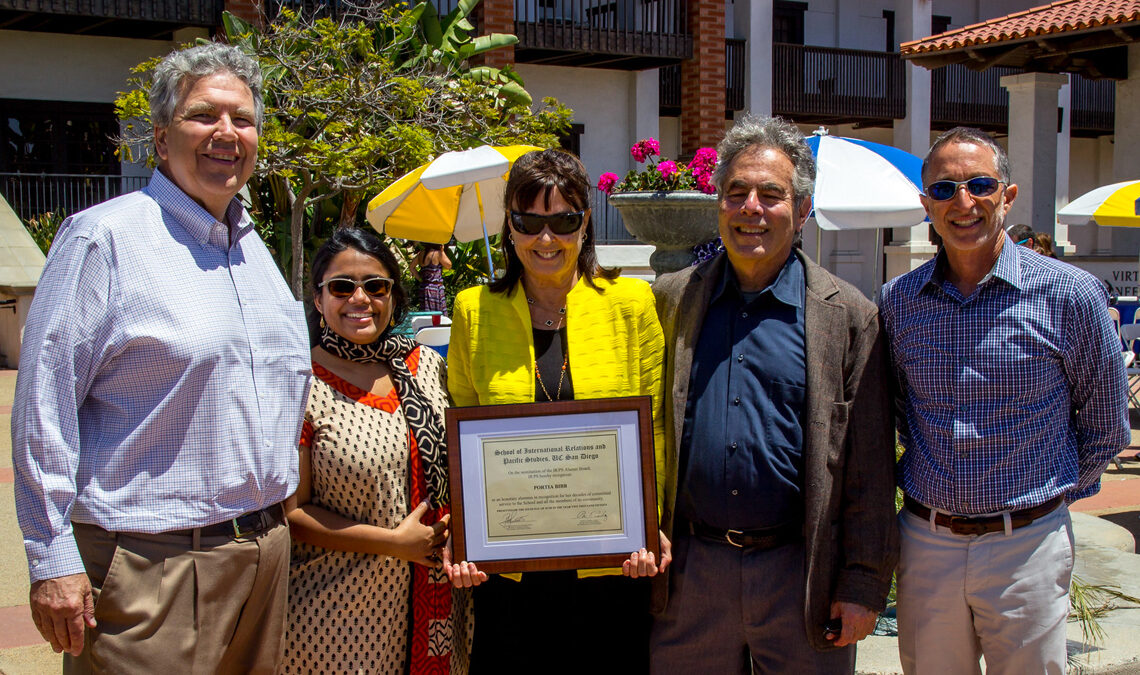 GPS welcomed more than 85 alumni back to their academic stomping grounds and honoring Portia Bibb, and calling point to climate change

As part of UC San Diego’s annual Alumni Weekend, the School of Global Policy and Strategy (GPS) carved out some time to not only reconnect its own alumni, but also recognize one of the School’s earliest staff members.

More than 85 guests attended the June 6 celebration, held at the Institute of the Americas (IOA). The event comprised a talk on climate change from Professor David Victor and a Salsa Saturday gathering during which Founding Dean Peter Gourevitch and Dean Peter Cowhey honored Portia Bibb with an Honorary GPS Alumni of the Year Certificate. 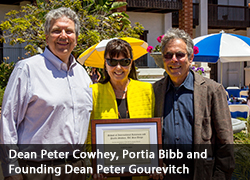 The deans presented Bibb with a plaque and turned the floor over to her for a few words.

Among other tokens of appreciation, Bibb traced through a list of alumni and colleagues who impacted her over the years, plus four lessons working at the School taught her: see the world and learn a language; give back; start something new; and never give up on doing the impossible.

“You’ve taught me so much,” she said. “You’ve changed my life so many times. I love this School.”

Cowhey added: “This is a school that’s more than a degree … it’s a family. Thanks for being a part of our family.”

Surrounding the recognition, alumni and guests reunited on the IOA plaza over Mexican cuisine and, a given, margaritas.

Prior to the gathering, Professor David Victor presented a talk on “The New Politics of Climate Change.”

“We should not underestimate how difficult it is to make progress on this problem,” Victor said as an introduction to the crowd.

He went on to tell a “tale of two climate politics,” expanding on “the best of times” and the “worst of times” for strategies to address climate change. Victor outlined strategies such as the effectiveness of small groups addressing the issue over large entities and Paris’s goal to curb global warming by stopping temperatures from rising 2 degrees Celsius—this of which many experts are wary.

Preceding the GPS celebration was the annual Triton 5K. More than 3,000 runners participated in the race, including representation from GPS in the Globe Trotters team. The group raised $705 toward student scholarships.

All-campus Alumni Weekend festivities began June 4, kicking off with lectures from past alumni and faculty experts. Professor Emilie Hafner-Burton, for instance, was a featured speaker at the Taste of UCSD event, presenting on “Promoting Human Rights on a Global Level.”

The talks continued into day two, when a trio of 2006 alumni—Philip Wang, Wesley Chan and Ted Fu—shared their rise to YouTube fame and creation of Won Fu Productions. The day concluded with a bash in downtown San Diego tagged Tritons in Rare Form. A True Triton Brunch event closed out the festivities on Sunday, June 7.

Watch the video and for social media coverage from the weekend, view GPS’s Storify piece, plus peruse a photo album from June 6 on Flickr.