Emboldened to make the future brighter 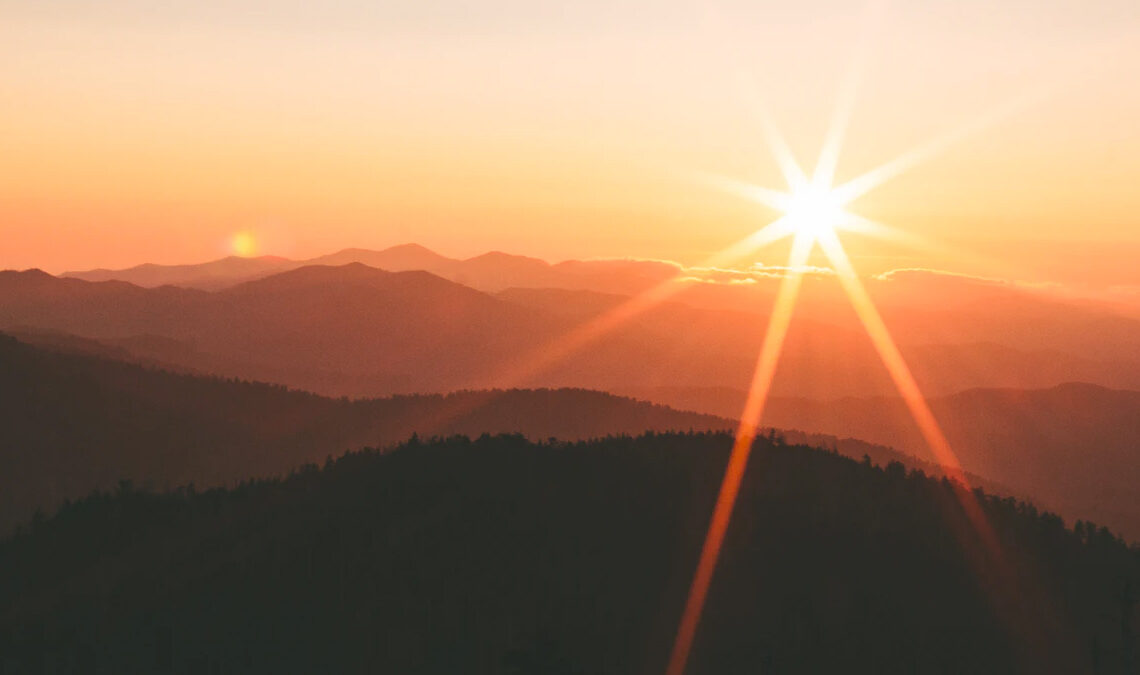 In time for International Women’s Day on March 8, we spotlight five GPS alumnae and their professional achievements stemming from moments of being bold in their careers

Just as alumni who graduate from the UC San Diego School of Global Policy and Strategy (GPS) remain representatives of the School well beyond their studies, women set the pace for future generations and, in turn, the speed at which gender parity accelerates across the world.

In time for International Women’s Day (IWD) on March 8, we tracked down a few GPS alumnae who have proven themselves as pathbreakers in their spheres of influence and whose careers have made a mark on most all corners of the globe—and in one instance, even on the cosmos.

In uniting their stories here, we celebrate their social, economic, cultural and political achievements—the mission of IWD—and the bold actions they’ve taken personally and professionally to benefit their futures and those of the females to follow in their footsteps—this of which aligns with IWD’s 2017 theme, Be Bold For Change. 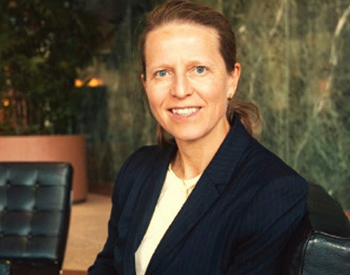 She works as … CEO of Nextrade Group in Los Angeles.

The best part of her day is … her daily runs and walks on the beach, where she gets her best ideas by the ocean and under the sun or stars.

Advice every GPS student should know is … “it is not necessary to improve your weak points. It is essential to hone your strengths. Say no to things you are not that good at. They are someone else’s strong suits.”

Four years after earning her Ph.D. from GPS, Kati Suominen not only found herself back in school pursuing an executive MBA but also found inside herself an entrepreneur.

Acting on an inkling she was meant to be her own boss, Suominen quit her relatively tenured job at the Inter-American Development Bank to instead start her own company. The bolder part of that leap, though, was she didn’t even have a business concept at the time.

“Looking back, that was pretty crazy,” Suominen said. “But I am very glad I followed my instincts and inner calling. We all evolve and need to allow ourselves to.”

She has since found two companies: TradeUp Capital Fund and Nextrade Group.

“There is no way I would be doing what I am today without my Ph.D.,” said Suominen, remarking on the “technical skills, analytical horsepower and credibility” she gained from GPS. “I also learned about the power of setting intention and focusing. I got done with my Ph.D. in less than four years because of that. And I learned humility—a Ph.D. teaches you how little you know.”

As an extension of that humility, Suominen also has honed an understanding important to entrepreneurs of any field.

“I have learned what I am great at and what I am merely good at,” she said. “I tackle only the roles where I can truly shine and find most joy.”

Being good at a lot, however, means Suominen has added a few more meaningful items on the bucket list for her career.

“I have also just started two nonprofits,” she shared. 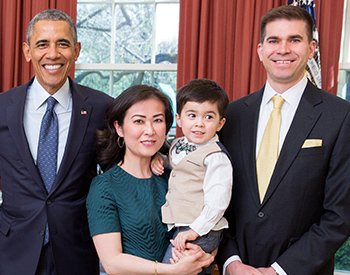 She works as … director of space engagement policy in the Office of the Secretary of Defense in Washington, D.C.

The best part of her day is … coming home to see her kids.

Advice every GPS student should know is … “kindness, collegiality and sincerity will serve you well. You never know who will run in your circles in the future. Be nice to everyone.”

As many mothers do, Elizabeth Phu sincerely considered scaling back her career commitments to dedicate more time toward her growing family after her first-born came along.

That was before the opportunity of a lifetime came up: The opportunity to directly sculpt President Barack Obama’s Southeast Asia policies and strategies.

“I put my reservations aside, overcame my anxiety and jumped at the chance to return to the White House,” said Phu, who formerly held posts in the Department of Defense and National Security Council. “I never regretted it.”

And she even has the photos, including family photos, to prove it—snapshots with the family in the Oval Office and selfies with the president in his limo, to name a few.

As well, she is no less dedicated to her family and has even scaled up her career from a solely Asia focus to that of outer space.

As director of space engagement policy, she shepherds partnerships with the U.S.’s allies around the globe to improve space capabilities.

“Outer space is increasingly recognized for its criticality in everything we as a department and as a government do, from forecasting weather in support of military operations to supporting intelligence activities to supporting communications among our armed forces,” Phu explained. “My job is to work with those partners and allies to do just that.”

The work, Phu said, reminds her a little of GPS in that it entails a bit of teamwork.

“All of those group projects at GPS were fantastic training on how to collaborate and maximize everyone’s strengths,” she said. 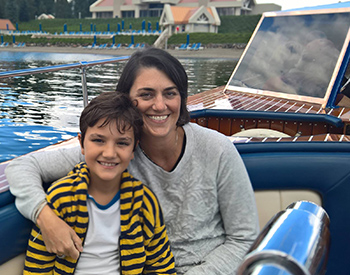 She works as … deputy coordinator in the Bureau of Counterterrorism in Washington, D.C.

The best part of her day is … going home to her 9-year-old son and striking a work-life balance by attending his soccer games and swim meets as much as possible.

Advice GPS students should know is …“be open and adaptable. Your career can take a lot of twists and turns. Even a bad turn will give you a better idea of what you do and don’t want to do.”

Upon joining the State Department as a Presidential Management Fellow in 1999, Hillary Batjer Johnson was fortunate to have a boss who instilled in her a lesson she imparts to her team today.

Grasping the importance of work-life balance right out of the gates of graduate school, Batjer Johnson has since made this a term of accepting promotions in every step of her career, including currently as deputy coordinator for homeland security screenings and designations. This, as well as holding her ground in male-dominated meetings, she tagged as her boldest moments, professionally.

As deputy coordinator, Batjer Johnson has a hand in how the U.S. coordinates counterterrorism abroad, including how it designates foreign terror organizations and individuals around the globe.

“We have to be able to speak everybody’s language and find the right approach,” Batjer Johnson said of working across different offices in the State Department, and added that’s where her education from GPS most shines. “The one thing I really liked about GPS was it pushed us to think about every angle of the problem. You have to be able to do that, to be able to be flexible and adaptable.”

Likewise, she has been malleable in the department ever since joining it 18 years ago.

“At the State Department, I never thought I would be doing homeland security or counterterrorism,” said Batjer Johnson, who began in the Bureau of Western Hemisphere Affairs. “It’s really taught me anything is possible.” 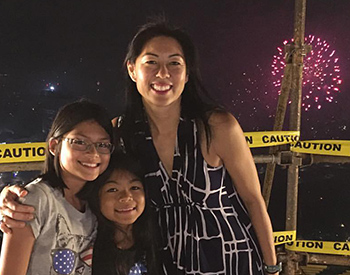 She works as … deputy director for health at USAID/Philippines in Manila, Philippines.

The best part of her day is … coming home and having dinner with her kids every night.

Advice every GPS student should know is … “there are periods in your life when it will be difficult, but periods of uncertainty can you lead you to great opportunity. Be open to different options.”

Bryn Sakagawa was by many counts a seasoned foreign service officer by the time she assumed her post as the director for health at U.S. Agency for International Development (USAID)/Senegal in 2012. In her decade prior at USAID, she had been stationed in Washington, D.C., Georgia, Yemen and Central Asia.

But this particular stint wasn’t without its challenges.

“It was huge,” Sakagawa said, remarking on the size of her team and budget.

The kicker? She had to lead the operation speaking French, a language she had studied just in high school and with little lessons thereafter.

“I had to become confident really fast about speaking and working in French,” she said. “It was probably the hardest thing I had ever done.”

At the end of four years in Senegal, she had not only persevered in the language but also made an impressive mark on the country.

“As a result of really good coordination, support and significant resources from USAID, we had a tremendous impact on the health of women and children,” Sakagawa summed, recognizing her fundamentals of teamwork were learned at GPS.

Under her leadership, contraceptive use in Senegal increased from a rate of 12 percent to 20 percent. Senegal also became one of the few countries in Africa with a decline in children mortality rates and among the only African countries to address and contain Ebola, as well as reduce rates of malaria.

Currently as deputy director for health in USAID/Philippines—a position she assumed in August—Sakagawa continues to fight malaria and tuberculosis, as well as advance women’s health.

Importantly, she continues finding satisfaction in her work and its bigger-picture influences.

“If you don’t support development or improving the well-being of people in need, it becomes a more global problem,” she concluded. “We see that with the refugee crisis in Syria. There are repercussions of which people should be aware. We’re all interconnected.” 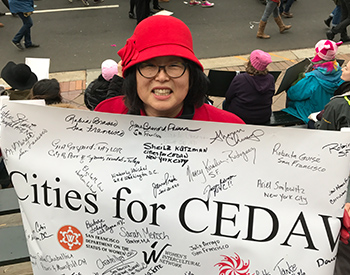 The best part of her day is … when being surrounded by remarkably diverse people and cultures, she is reminded the work she does has a global impact.

Advice every GPS student should know is … “give yourself permission to experiment in your career. You need to see the menu before you order.”

When in 1995 Hillary Clinton declared at the Fourth World Conference on Women that “human rights are women’s rights, and women’s rights are human rights,” Emily Murase—an Asia-Pacific telecom specialist at the U.S. Federal Communications Commission (FCC) at the time—heard the First Lady loud and clear.

In fact, she has since made a career out of the notion.

Today as director of the San Francisco Department on the Status of Women, Murase is the point woman for San Francisco’s strides in combatting violence against woman and female trafficking, as well as for the city’s move toward a victim-centered approach for criminal justice agencies responding to these crimes.

Past a local scale, Murase and other members of the department became the first U.S. representatives to brief the U.N. Convention on the Elimination of all Forms of Discrimination Against Women (CEDAW), traveling to Geneva in November to do so.

“That moment brought together both my passion for advocating for women and my training at GPS,” Murase said, pointing to Peter Cowhey specifically for influencing her career.

Upon the recommendation of Cowhey, who is currently UC San Diego’s Interim Executive Vice Chancellor for Academic Affairs, Murase joined AT&T’s Tokyo office after graduating from the School. After three years with the company, she made her way to the White House as a director for international economic affairs and later joined the FCC.

“It’s really unfair to ask a GPS grad what they’re going to do with the rest of their life,” Murase reflected. “There is no cradle to grave of your career path.”

Still, Murase takes pride in a moment at the beginning of her career that, in retrospect, was perhaps foreshadowing for profession today.

“At AT&T, I learned I was being paid more than 30 percent less than colleagues of mine with the same degree,” she said. “I had to advocate for myself in a corporate context. I encourage women to advocate for themselves and assert themselves when there’s injustice.”