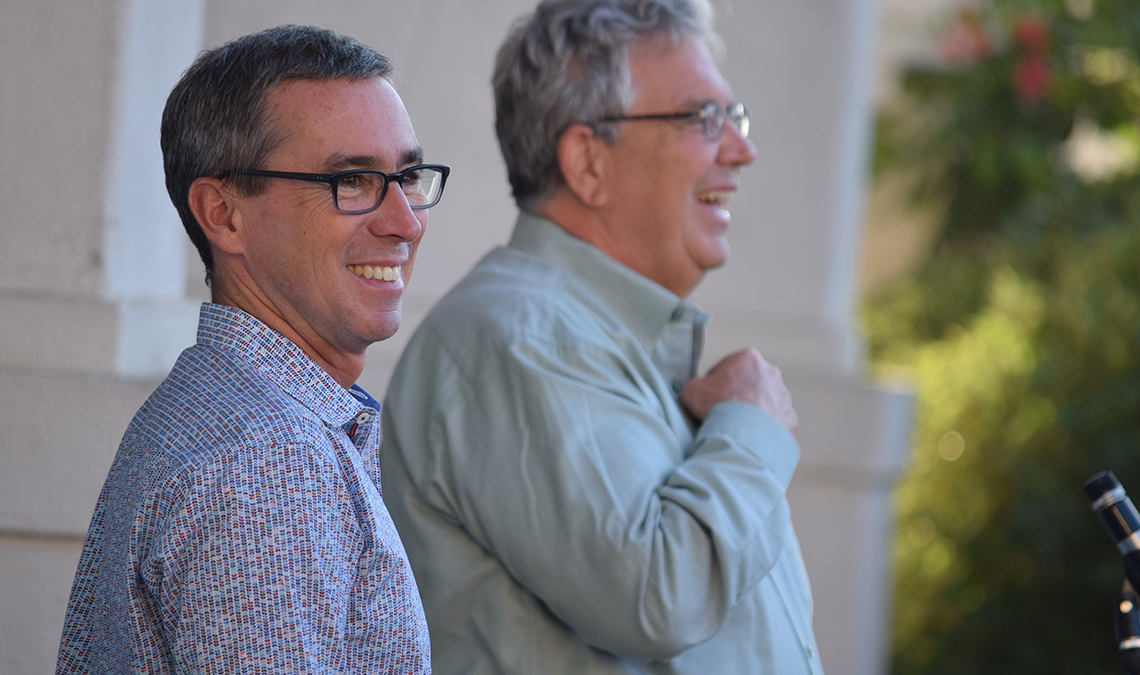 When Dean Peter Cowhey fills the shoes of the second highest-ranking official at UC San Diego in August, several of his colleagues at the UC San Diego School of Global Policy and Strategy (GPS) will be walking a new walk, too.

Or as Acting Dean and Professor Gordon Hanson explains it, “It’s taking a team to replace Dean Cowhey.”

“I asked them to step into this job on virtually no notice, and they put aside their plans to accommodate my being able to take on the executive vice chancellor position,” Cowhey said.

“That’s a real sign of loyalty to the School. We’re able to share the burden among them because we have so many talented senior faculty with leadership skills,” he said, and added lightheartedly, “I’m sure the team collectively will do a better job than I do individually.”

Being a ‘player coach’

It’s a different administrative structure from when Hanson served as acting dean in 2014 and Cowhey took of a short leave to work on his forthcoming new book.

“The School under Peter’s time has grown a lot,” Hanson commended. “Executive education has grown, degree programs have grown, and the faculty have grown. So being dean is a bigger job than it used to be.”

Still, with prior experience in his back pocket, Hanson is prepared to put back on the acting dean hat he hung up not too long ago. 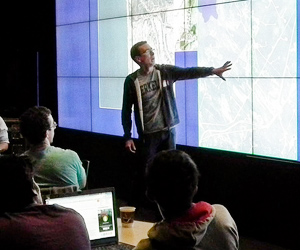 “I plan very much on being a player coach,” he noted. “That means I’m not giving up my research career. This is what I love. I don’t plan on putting that on a backburner.”

And the same goes for his daughter’s field hockey and lacrosse games: “Those will be booked out of my schedule; no meetings during game-time,” he said.

Then, with gusto, Hanson detailed his latest research that is deep-rooted in cross-campus collaborations at UC San Diego such as through the Big Pixel Initiative. In working with geoscientists across campus and with experts at Google Earth Engine, Hanson is leading the university’s efforts to measure urbanization worldwide using satellite imagery.

“We want to be able to measure how cities grow and expand on the whole planet as close to real-time as we can by using the vast amounts of satellite imagery that are coming online,” he said.

However, Hanson recognized that with greater responsibilities come some sacrifices. For instance, he will only be teaching one class in the coming school year. That is, Topics in International Trade in the spring. He also will be scaling back his involvement in the Center on Global Transformation’s (CGT) Pacific Leadership Program, but nonetheless committed to the center itself—and especially the research being produced there.

“The projects CGT is helping spearhead are also the projects that are going to be at the core of where the School is going,” Hanson said. “One of the areas we designed for us on campus is to be this nexus where STEM meets public policy. CGT’s activities help flesh that out.”

In line with this initiative, Cowhey noted he hopes to return to the School with fresh vision for how GPS can better cultivate itself as this nexus.

“As the School evolves, one of its primary challenges is intersecting effectively with the other academic units on campus,” Cowhey said. “I’m sure I’ll have some new perspective on the best ways to achieve that because I’ll be supervising all of the units during this year.”

Keeping the strategic plan on course

Having the chance to oversee GPS from a larger scale in his interim appointment, not just being absent from it, Cowhey said also will provide opportunities to stay in touch with the School throughout the year. For instance, he plans to attend the dean’s welcome reception and GPS’s International Advisory Board meeting in Mexico City in the fall, amid acting as a resource to his colleagues throughout the year.

“We look forward to having a very fruitful relationship with him as the School continues to moves forward,” Hanson said. “The major task we face is to continue to carry out the strategic plan that we developed under Peter’s leadership and that we hope to implement yet again with him as a partner and us as the lead actors.”

To that end, Hanson expressed appreciation for the associate deans who have stepped up to ensure close ties with the School’s staff, alumni, students and faculty, including in welcoming GPS’s new Professors Francisco Garfias, Teevrat Garg, Nico Ravanilla, Kate Ricke and Weiyi Shi.

“We already have a large group of young faculty here in the School, and we’re going to be adding more,” Hanson said, giving a hat tip to Graff Zivin and Walter’s leadership in this area. “We have a history of being a place that gets along really well, and we want to work hard at incorporating new faculty into the life of the School.”

As well, Hanson said, under the leadership of Samphantharak he looks forward to engaging with students more during his acting deanship through events such as the Dean’s Fellows’ first Friday brunches and activities put on by GO GPS (formerly PIASO), among other engagements.

With all of these actors in place and a reliable staff to support him, Hanson concluded very much the mindset of an acting dean, “We wish Dean Cowhey Godspeed and a hasty return. ”

By Christine Clark
2 Mins read
Study suggests that when pay information is made public, it incentivizes institutions to compensate women more fairly