A new field guide for fieldwork 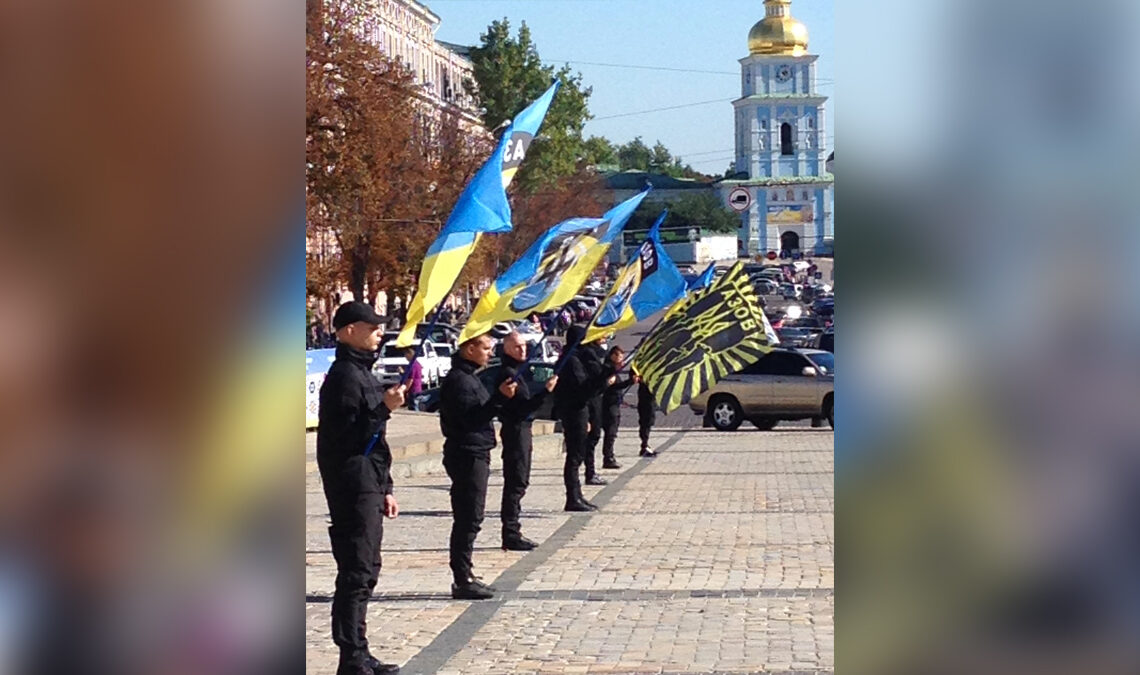 The Azov Battalion organized a demonstration in front of St. Sophia cathedral in downtown Kyiv in 2014, while Jesse Driscoll was conducting fieldwork in the area. | Photo courtesy Jesse Driscoll
PDFPrint

Jesse Driscoll explains the challenges that arise when conducting research in difficult settings in his latest book, “Doing Global Fieldwork”

Jesse Driscoll is a political scientist who has conducted research in Kyrgyzstan, Tajikistan, Somalia, Georgia and Ukraine – and after years of fieldwork in war-torn areas, he’s a bit of an expert on how even the best laid research plans can go awry.

Those experiences led the UC San Diego School of Global Policy and Strategy (GPS) associate professor to the concept for his latest book, “Doing Global Fieldwork.” Driscoll covers a wide range of topics that can arise while researchers are in the field, from ethical considerations to appropriate dress and risk management.

Driscoll sat down with GPS News to discuss his new book, which details how researchers can more effectively manage fieldwork and better respond to the unexpected.

How did you develop the idea for this book?

I noticed that I was having a lot of the same advising conversations in my office with Ph.D. students in comparative politics and international relations, either before their fieldwork or afterwards. I wanted to systematize my own thinking on common questions.

Who is the intended audience?

It’s for anyone who is considering fieldwork but not sure what is involved. It’s mostly aimed at current Ph.D. students in the social sciences, but some of the advice could be useful for M.A. students or natural scientists. Many scholars re-invent themselves mid-career or come to fieldwork later, too. Of course, in the end, university professors are mostly writing to each other – we’re a readers guild, all trying to give responsible advice to the next generation. The book is an effort to “pay it forward” to the next generation, in a way.

How do you envision readers using this book?

If I’m lucky, by skipping around and finding enough little nuggets of memorable wisdom to offset the dated sections and errors. [laughs]

I’m joking, kind of. Graduate school is really hard. For Ph.D. students, it stops being an IQ test immediately after you pass your comprehensive exams. You want to become a comparativist? OK, you passed your exams – so what next? The graduate student is often completely on their own and told to come up with a plan to write something original, professional and interesting, all without supervision, often far from home. It is daunting. You get mentorship and help from an advisor or two, sometimes, but a lot is on you to figure out for yourself. So I tried to write the book that I remember needing but not having: advice on nuts and bolts – how to write a grant, how to get permission from my university (and what the benefits were), how to pack, how to decide how much classroom language was “enough,” how to do an interview, how to manage a team of researchers, how to stay safe, how to weigh risks, how to think about presenting myself as a professional and more. I don’t imagine that a poor field researcher can become a great one with this kind of advice, but maybe a mediocre fieldworker can become a competent one.

What are some of the unexpected challenges that can arise when doing fieldwork?

There are a lot of different kinds of challenges. In the book I try to break it down a few ways.

Many challenges are “normal science” challenges that relate to not finding what you expect, but needing to produce a clean product that you can “write up” anyway to get your career started. Improvisation is always a part of fieldwork, but it is common to struggle with how much of the initial plan (that advisers signed off on!) you are supposed to stick with once it comes to feel unworkable. When to push ahead? When to cut losses and re-group? Those are tough calls.

Some challenges come from constraints you didn’t foresee that are completely outside your control. Some are related to things that fieldworkers can control but are not used to thinking about, such as like how they dress, how they explain their work to others – even how they exercise and how they get around! – in order to maximize access to their study community.

There are separate challenges related to managing personnel, which is something that is completely foreign to many graduate students. They often don’t realize until midway through the project that they’re losing a lot of time doing everything themselves – but also aren’t used to thinking of themselves as managers and don’t know how to do it. So whether it’s overseeing the workflow for a team of research assistants or training a personal translator or working with an NGO to randomize programming, these challenges are pretty common.

What would you say is the most difficult issue?

Challenges related to physical safety and psychological well-being are certainly the toughest stuff. As an author, I did not expect to write a book with such an intimate voice, but in the end I found that I had to, since these issues are so difficult and salient, both during and after fieldwork. Issues may be acute in insecure areas or zones of contested sovereignty, but there are psychologically bruising aspects of fieldwork and re-entry into academic life that are common for people that did not live adjacent to violence, either. Research becomes personal.

Be more specific. What are some of the ethical considerations researchers might face?

There are lots of issues that fall under the broad heading of “ethics” that are pretty distinct from each other, but all of them are united by inherent issues of power and privilege. Self-awareness about these matters is not something that political science (maybe especially international relations) is great at, historically. I emphasize the need for a personal code in the early pages of the book, but how that code shakes out is different for different sticky situations: personal relationships, being dishonest about the purpose of your research, the ethics of overseeing large-scale experimental interventions (and explaining what you did to hostile audiences afterwards), etc. It isn’t a matter of saying “I’m an ethical person, right?!” and looking to authority figures for validation. You have a long memory. So do the people living in your field site. So does the guild.

When is the book available for purchase?

It is actually available right now – in paperback and on Kindle.

Tell me some of your own experiences conducting research in the field.

[laughs] I have a few crazy stories, but it’s really not a book about my experiences – and the goal of the book is to de-valorize extreme fieldwork. I’m starting a podcast with Christian Davenport (tongue in cheek, we’re calling it Raiders of the Lost Archive). In time, I’ll re-hash some of my experiences there.

What are your next projects?

I’ve been working on a book for a few years (jointly with Dominique Arel) on Ukraine’s war in the Donbas. It is currently under contract with Cambridge University Press, and we are very excited!

Data from Behind Enemy Lines: How Russia May have Used Twitter to Seize Crimea