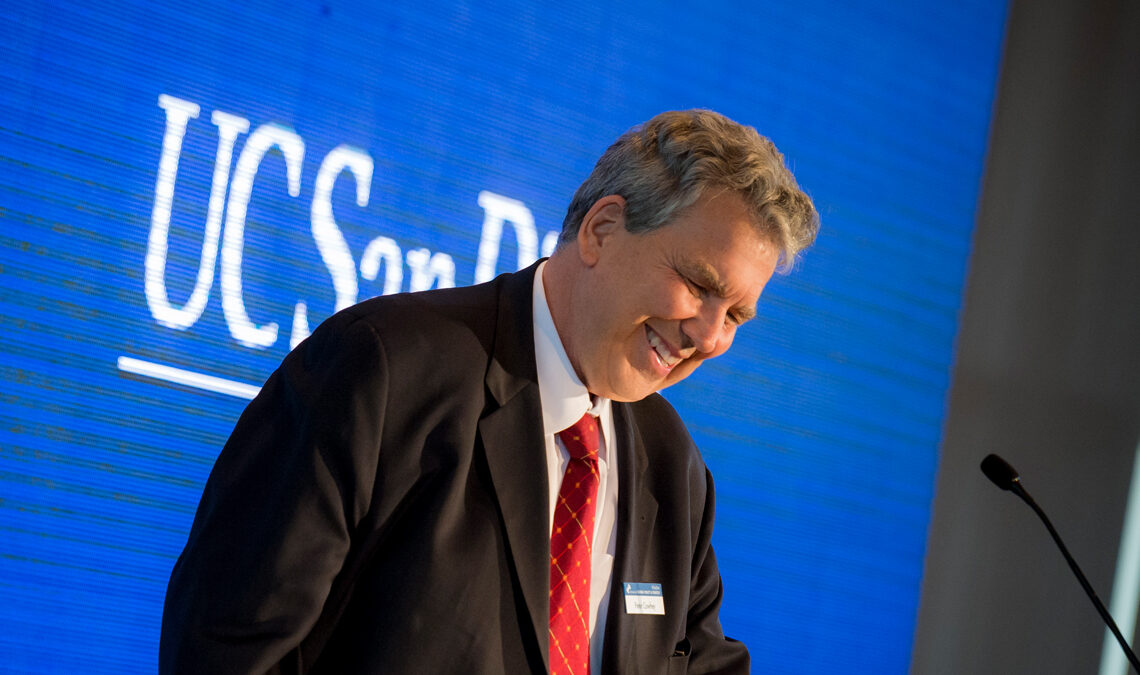 Recognition of Dean Peter F. Cowhey’s retirement included a symposium with business leaders, policymakers and academics, highlighting his contributions to our ever-changing world

He led the UC San Diego School of Global Policy and Strategy (GPS) for nearly two decades to become one of the world’s best international relations and public policy schools. He served in multiple White House administrations and helped shape the country’s international telecommunications landscape. His leadership and vision have positively affected countless GPS students, faculty and alumni, and with his policy work, he has touched the lives of millions, if not billions. Soon, Peter Cowhey will retire from his role as dean of GPS.

In recognition of his broad and significant impact, more than 250 people gathered virtually to honor Cowhey as part of a special symposium on April 23.

Cowhey, who retires June 30, joined the faculty in 1976 and has served UC San Diego in a number of administrative capacities, such as interim executive vice chancellor from 2016-17 and associate vice chancellor for international affairs from 2004-08. Upon retirement, he will be named professor emeritus.

During his career, Cowhey also held high-level positions in the Clinton and Obama administrations, with roles such as the bureau chief for the Federal Communications Commission (FCC) from 1994-97 and as a senior counselor in the Office of the U.S. Trade Representative from 2009-10.

“Peter epitomizes what nontradition means,” said UC San Diego Chancellor Pradeep Khosla, one of the symposium panelists. “He has created a culture of collaboration and innovation. He nurtures new and innovative ideas. GPS sits at the nexus of science, technology and policy for UC San Diego, which is a point of pride for all of us.”

Irwin Jacobs, a longtime donor and supporter of both GPS and UC San Diego, said the endowed gift was a fitting tribute to Cowhey’s transformative work, both in policy and in academia.

“This gift expresses Joan’s and my great respect for him, which I am sure all of you share,” Jacobs said during the symposium panel. “We are very pleased to have that as a continuing tribute to his great work at GPS.”

Cowhey thanked the Jacobs for their gift and assured his continued commitment to taking CGT to new heights.

“I would never have dreamt – including last week – that I’d be the recipient of an honor like having the center named for me,” Cowhey said. “All I can say to Irwin and Joan: I can promise that whatever retirement means, it will not include shirking my duty to bring my passions and skills to the center.”

During the symposium, GPS International Advisory Board member Rafael Pastor announced another way Cowhey’s legacy will be honored in perpetuity: a fundraising initiative, including a $500,000 Chancellor’s match, to establish the Peter Cowhey Chancellor’s Endowed Chair in Global Policy, which is close to its $2 million goal. Once established, the chair will provide support for the research, teaching and other related work of a distinguished senior professor at GPS. Anyone interested in donating to the chair can contact Senior Director of Development Jean Korinke.

Throughout the event, Cowhey’s colleagues, collaborators and contemporaries discussed the arc of Cowhey’s career, divided into three sections: Cowhey’s research and writings on the international trading system; his contributions to public service; and his leadership at GPS.

Jonathan Aronson, professor at the University of Southern California, discussed how he and Cowhey had been collaborating on research projects and publications for almost 50 years.

“Both of us focused from the beginning on, ‘How do we change things? How do we make things better?’” Aronson said. “Our audience was always the same – people who could help to change the world in a positive manner.”

And Cowhey did, in fact, change the world in a number of positive ways; notably, he was instrumental in developing the World Trade Organization’s 1997 telecommunications agreement, which assured that cellular and Internet services would connect between countries across the world.

“Most academics never get the chance to try out their ideas in practice. Many would never want to, and many would not know how to,” said Susan Shirk, chair of the 21st Century China Center. “He dreamed up what the U.S. should try to get, and then he went to Washington to get it.”

“This kind of academic breadth makes GPS a powerful intellectual force,” Simmons said. “[Cowhey] has a great crystal ball for things that are just about to appear over the horizon. I feel very fortunate to have had the chance to collaborate with him and learn from him.”

Peter Gourevitch, GPS’ founding dean, commented that the successes of the school – from the establishment and development of world-renowned research centers like the 21st Century China Center and the Center for U.S.-Mexican Studies, to the level of talent GPS attracts in its students, faculty and staff – is all due to Cowhey’s “extraordinary leadership.”

“Peter has built us into an outstanding institution,” Gourevitch said. “Thank you, Peter Cowhey, for what you have done for us.”