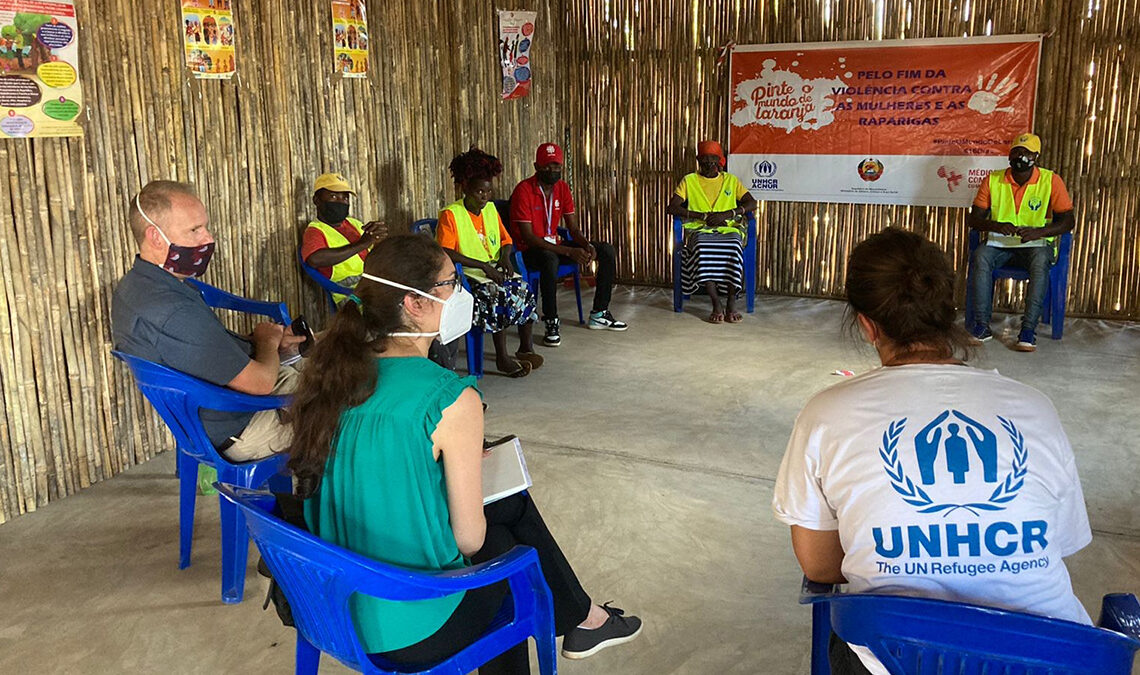 Melia Ungson met with community volunteers and UNHCR representatives during a visit to a camp for internally displaced persons in Mozambique’s northern province of Cabo Delgado. | Contributed photo
PDFPrint

“My parents emphasized and modeled the value of public service, and in high school, I had the opportunity to intern in my representative’s district office and witness how the government impacts people’s lives,” Ungson said.

In college, Ungson interned at the U.S. Embassy in Vientiane, Laos.

“With challenging and mission-driven work, supportive and interesting colleagues – and an environment that rewarded intellectual curiosity – I knew I would want to pursue a similar career,” she added.

After Ungson earned her undergraduate degree, she spent a year in Laos doing Fulbright research on urban waste management and then working for a nongovernmental organization (NGO) focused on data analysis and mapping. As she considered returning to the U.S. for graduate school, Ungson said the UC San Diego School of Global Policy and Strategy (GPS) stood out for its focus on quantitative methods and its offerings related to Southeast Asia – as did the financial support from the Robertson Foundation for Government (RFG).

“The proximity to family in California, lack of snow and offer of a Robertson Fellowship made GPS even more enticing,” Ungson said. “I also had the opportunity to speak with a GPS alumna who praised the program.”

The Robertson Fellowship impacted her time at GPS in many ways, Ungson added.

“The financial support allowed me to pour my energy into coursework and extracurricular activities, even though I decided to work as a teaching assistant for the quantitative methods courses during my second year,” she said. “The fellowship also provided a network, both within GPS and with the other Robertson-funded schools. My Robertson Fellowship colleagues provided insights on different federal government opportunities, tips for applications and became a new community for me while living in both San Diego and Washington, D.C.”

Through both the Career Services team at GPS and advisers with RFG, Ungson said she felt prepared to apply for government jobs and internships, had the opportunity to connect with alumni at various agencies and learned about opportunities she would not have otherwise considered. She interned at the Government Accountability Office (GAO) between her first and second year at GPS and participated in the Robertson Fellowship’s networking and professional development programming.

“It was fascinating to learn about other fellows’ experiences, and I especially noted opportunities where I might be able to apply the quantitative skills I focused on while at GPS,” Ungson said.

Ungson graduated from GPS with a Master of International Affairs (MIA) degree in 2017, when a government hiring freeze that year threw a curve ball in her path toward public service. She accepted a position at Fraym, a geospatial data and analytics start-up based near Washington, D.C. In this position, she learned about building a company, pitching new clients, negotiating federal government contracts and managing organizational change.

“After being laser-focused on government, it was eye-opening to work in the private sector for a few years,” Ungson said. “In addition to applying and strengthening my quantitative and analytical skills, at a fast-growing startup, my responsibilities grew much more quickly than they would have in government; I soon led a team, managed projects,provided input on company decisions and launched diversity, equity, inclusion and accessibility initiatives.”

In 2020, Ungson transitioned to the Department of State as a foreign service officer but said she was grateful for the experiences and perspectives from her brief foray into the private sector. For her first tour, she is a political-economic officer focused on human rights and labor at the U.S. Embassy in Maputo, Mozambique. Notably, she has supported humanitarian assistance efforts for roughly 800,000 people displaced by terrorism in northern Mozambique.

“I have enjoyed expanding the embassy’s engagement with organizations focused on marginalized groups, including persons with disabilities, persons with albinism, LGBTQI+ individuals, youth and women,” she said. “I love being able to use Portuguese every day and having the chance to explore Mozambique and southern Africa.”

In August 2023, Ungson will head to Toronto, Canada for her second post, where she will do a year of consular work and a year of political and economic work – and though the location may shift, Ungson anticipates a lifelong passion for public service work. It is both interesting and fulfilling to collaborate with so many different agencies and learn from colleagues who have expertise in issues from health and humanitarian assistance to security cooperation and counter-trafficking, she said.

Ungson shared that every day is so different from the next. One week might have a day packed with a high-level visit, a few meetings with government or civil society leaders and a quiet day to catch up on writing before ending the week by joining the ambassador on a site visit or welcoming guests for an event on women’s empowerment.

“What ties everything together is the focus on strengthening our bilateral relationship and advancing foreign policy objectives, including respect for human rights,” Ungson said. “Even when the days are long or stressful, I feel very lucky to serve and represent the American people.”