A fresh perspective on COP27 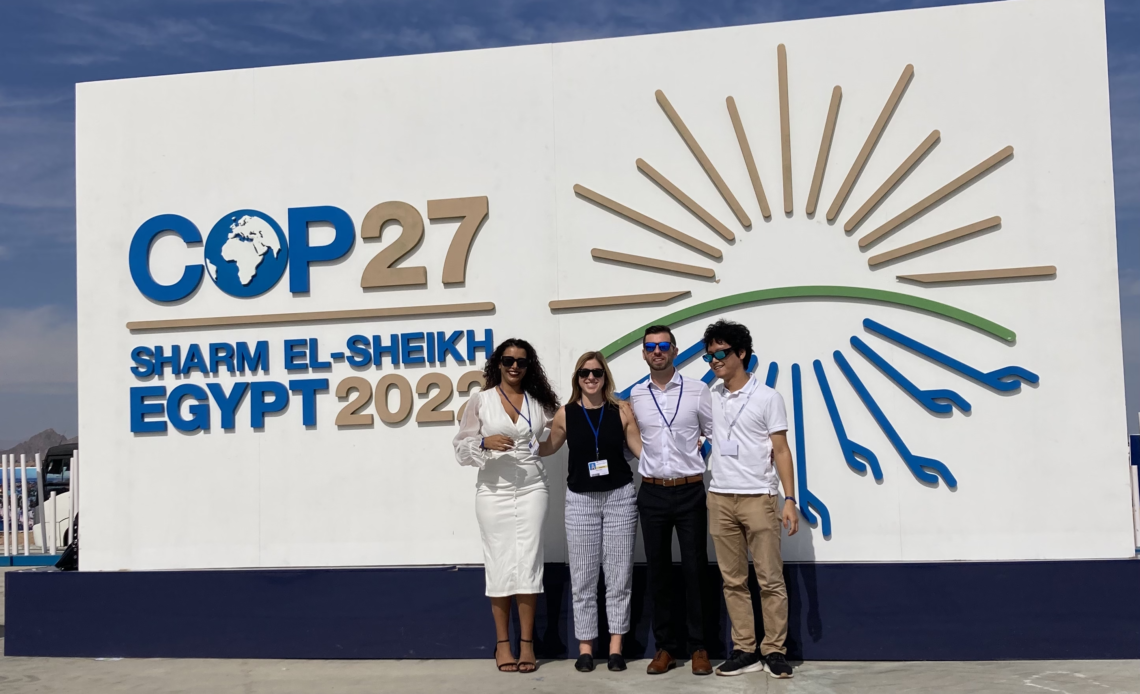 The 2022 United Nations Climate Change Conference, informally known as COP27 and held this year in Sharm El Sheikh, Egypt, brought together governments, activists, researchers and businesses interested in climate policy — and a number of students from the UC San Diego School of Global Policy and Strategy (GPS) had the opportunity of a lifetime to attend the event in person.

In a webinar on Nov. 30 hosted by the Deep Decarbonization Initiative (D2I), GPS students shared fresh insights on the experience of participating in this high-level, multi-nation event: what worked, what didn’t and what will be needed as governments grapple with the need for international cooperation to slow global warming.

Emily Carlton, a GPS ’21 graduate and D2I research associate who moderated the webinar, explained that there has been a bit of pessimism around COP27, but her experience at the event left her feeling the opposite.

“Negotiations this year were very contentious, and there were not a lot of new pledges and no agreement to phase out coal or other fossil fuels,” Carlton said. “But even though our feeds were full of bad news, I felt really energized and encouraged talking to people from every corner of the planet who are working on the same thing.”

Many of the students commented on the hallmark development of the loss and damage fund through this year’s COP, which is intended to assist developing countries that suffer environmental consequences from climate change.

“Wealthier countries are pushing back, while developing countries in the global south, which are most affected, are pushing for it,” said Joseph Persico, Master of International Affairs (MIA) ’23 candidate. “We ended up getting a very tentative, low-obligation agreement passed. It’s a huge push in the right direction, and it’s a key part in advancing these developing nations who have been most impacted by climate change.”

Hana Moumen, a Master of Public Policy (MPP) ’23 candidate, said her dual Algerian and French citizenship put her in the unique position to speak with delegations on opposite sides of the loss and damage fund issue.

“While I was at COP, I got close to the African youth delegation, and they educated me a lot on the topic. I was with them when they found out about the outcome, which was a really moving moment for me as an Algerian,” Moumen said. “I’m also a French citizen, and I spoke with the French delegation about the loss and damage fund, which France originally did not support.”

The students also weighed in on the power of having political figures in attendance for the COP27 negotiations.

“I think because the U.S. is such an economic power, it’s always at the center of the debate,” said Tomoyuki Suematsu, MPP ’23 candidate. “The U.S. presence was so large, which attracted a lot of press and journalists, so everyone paid attention to who said what.”

“Having national leaders there sends a signal to that country’s citizens, who voted to put them in power, that they’re taking climate change seriously,” Boyd explained.

Overall, the attendees left COP feeling optimistic about the future.

“I didn’t expect to come out of there feeling energized, but I did,” Carlton said. “I realized that implementation isn’t really happening in the negotiating room; it’s happening on the ground. There are small groups of motivated actors doing small projects, and that’s what is making real changes.”

GPS was part of a larger delegation composed of students, faculty and staff that included UC San Diego’s Scripps Institution of Oceanography. Meet them here.

By Virginia Watson
3 Mins read
Students share their experiences with the Kakehashi Program, which sponsored them on a week-long trip to Japan
EventsFacultyResearchStudents