‘You can always go around the obstacles’ 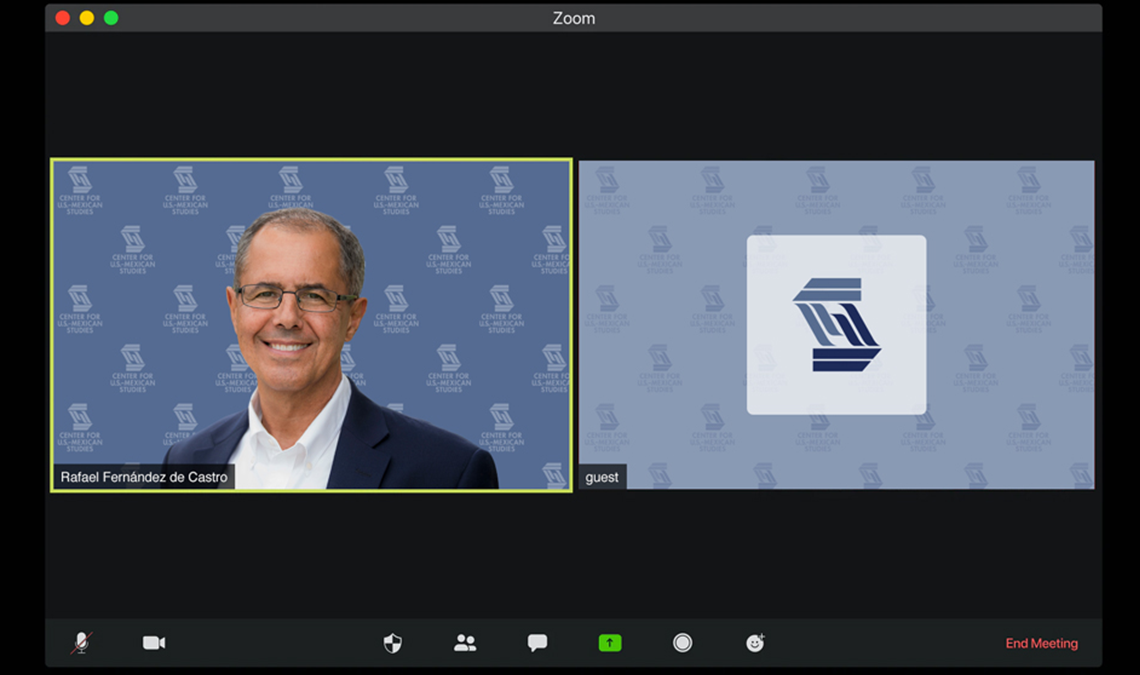 Despite the ongoing stay-at-home order amid the novel coronavirus pandemic, Rafael Fernández de Castro is broadening the reach of the Center for U.S.-Mexican Studies

When California Gov. Gavin Newsom issued the stay-at-home order for the state in mid-March of this year, the Center for U.S.-Mexican Studies had to abandon plans it had for the remainder of the 2019-20 academic year and pivot to an all-digital world.

But Rafael Fernández de Castro, director and professor at the UC San Diego School of Global Policy and Strategy (GPS), said the ways the center was forced to innovate have been, in some ways, a blessing.

“I believe we are very fortunate because academia, especially at a university research center like this, can operate very well under emergency conditions and still conduct research, classes and conferences,” Fernández de Castro said. “We have tried to emphasize the advantage of doing this through the internet and to reach audiences through digital technologies like Zoom. You can always go around the obstacles.”

The series ultimately had 19 webinars total, concluding in late July, and were wildly successful, garnering up to 800 participants in the live webinars and thousands of subsequent views on YouTube. Fernández de Castro credits the ongoing success of the series to a partnership with Mexican newspapers that began with the ninth webinar.

“In the middle of the road, we created a strategic alliance with 10 Mexican newspapers, which started to promote our webinars on their web pages. In particular, as a result of a partnership with one newspaper based in Mexico City, we got a lot of viewers,” Fernández de Castro said. “We usually got thousands of  hits over a weekend.”

Midway through the process, the center also hired an English translator to translate the webinars live in order to reach English-speaking audiences.

Fernández de Castro said the webinars had such a wide reach that California Lt. Gov. Elena Eleni Kounalakis reached out to them and wanted to participate in a webinar outside of the COVID-19 series focused on current relations between Mexico and California, which they hosted July 14.

“Thanks to the webinar series, the center played a prominent role in engaging in dialogue between Mexican experts and U.S. experts, including academics, policymakers and journalists,” Fernández de Castro said. “This is what we’re here for.”

Despite taking a break from webinars during August and September, the center hardly took a pause, instead shifting focus to their online summer seminar for government officials, sponsored by the U.S. Embassy in Mexico. Fernández de Castro said this year the center brought together 100 Mexican officials from the three branches of government – three times the number of officials they hosted in summer 2019.

“The seminar, which focused on U.S. political institutions and U.S.-Mexican relations, received 300 applications from Mexican officials, but we only accepted one hundred to keep the group manageable and engaged,” Fernández de Castro said. “We created a new network of Mexican officials who now have a better understanding of U.S.-Mexico dynamics and affairs.”

The center is also preparing for its signature event of the year in November: the U.S.-Mexico Forum 2021-2025. The forum, which will host a network of U.S. and Mexican policy experts, will address the most urgent issues, such as the economy, security, energy, immigration and diplomacy.

“The experts will be writing five papers addressing the five most important policy topics of the next presidential term,” Fernández de Castro said.

According to Fernández de Castro, the outcome of the presidential election will shape the policy papers, which will be tailored to either a new Biden administration or a second term of the Trump administration. And just before the presidential inauguration in January, the forum will hold the final conference to further concretize their policy recommendations.

Fernández de Castro said the center has also created a group combining Tijuana and San Diego businesspeople and policymakers, with the intent for the group to write 10 short papers about how the San Diego-Tijuana region can emerge stronger.

“We want to explore how we can put more substance into this region and how we can encourage more integration between these two cities,” he said. “We have a very important emphasis on this region.”

By Virginia Watson
3 Mins read
Commencement ceremony honors graduates’ accomplishments, with an eye toward the challenges for which the school’s training has prepared them
×
Research