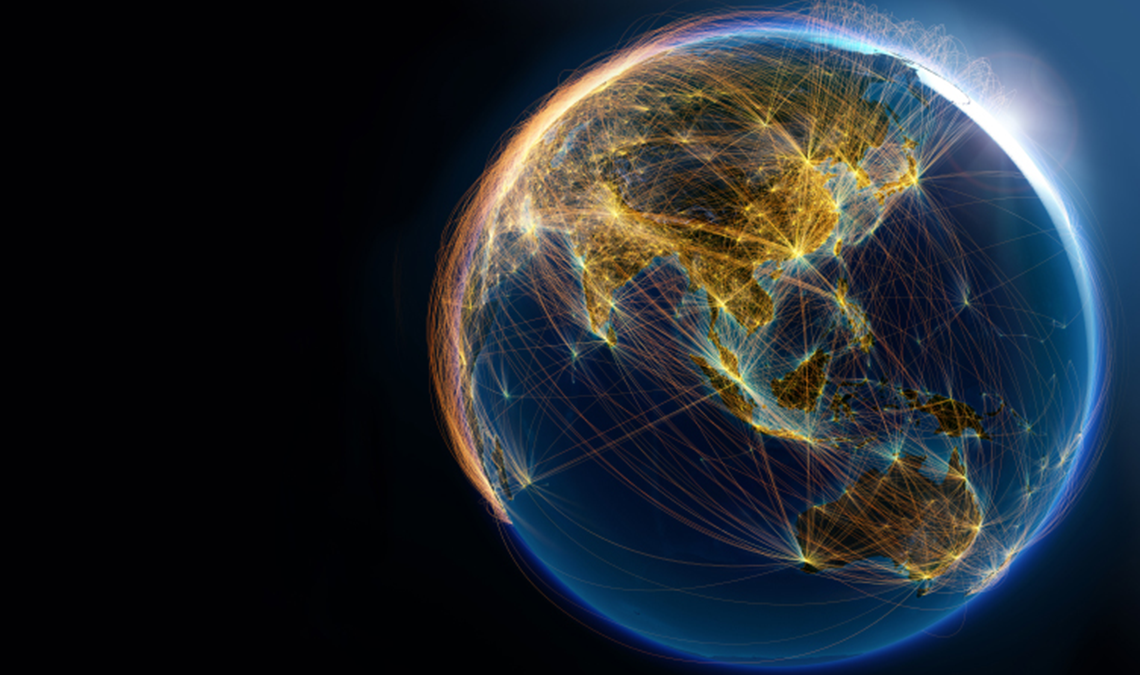 Globalization – or the movement and exchange of people, goods and services, capital, technologies or cultural practices – is an often-used buzzword for politicians and pundits.

Academic literature commonly divides globalization into three major areas: economic, cultural and political, with all three having a number of pros and cons. The benefits of globalization can include access to new markets and talent, lower production costs, new exchanges of goods and services, higher standards of living, access to new cultures, faster transmission of technology and innovation, and more. Some adverse consequences of globalization include corruption, job insecurity, currency fluctuation and price instability.

At the UC San Diego School of Global Policy and Strategy (GPS), part of our mission is to reimagine globalization through training and guiding the next generation of leaders, policymakers and diplomats. We work to continually redefine the skills and thought leadership needed to confront and solve the most challenging policy problems.

We asked some of our faculty the following question, as related to each of GPS’ 12 policy topics: How does your research inform the new reality of “globalization”?

Eli Berman: “Now more than ever, globalization is about building global public goods that protect us all. COVID-19 containment is this year’s example. Our ‘development and conflict’ research teams work with governments and NGOs to reduce poverty and improve basic government services for 2 billion people who lack physical security, because governance is absent or excludes them – so COVID vaccination, for instance, will be a struggle. More generally, GPS research addresses major topics, with implications for everyone’s public goods, globally: climate, democracies and elections, discrimination, disinformation, economic development, trade, and nuclear nonproliferation, for example.”

Tai Ming Cheung: “My research examines the growing technological and security competition between the U.S. and China, which is leading the world away from globalization to a balkanization of the global order, with competing power centers and associated systems centered on the U.S. and China. How complete a break the world will find itself between these two separate and competing set-ups is still in its early stages of development. Areas where national security considerations are of utmost importance will likely see a clear and deep separation, while less sensitive non-security domains could very well see continuing cooperation. The next decade will provide a clearer picture of the long-term trends between globalization and a partitioned world.”

Jennifer Burney: “The emissions that cause climate change – particularly in food and agriculture – come from a fundamentally globalized system. Demand in one area or sector can lead to emissions or exploitation of environmental resources across the world. By understanding in detail what processes contribute to human emissions in different locations, we can better understand the network of pressures that drive to climate change and environmental degradation, and design solutions that might actually work.”

Lauren Prather: “My recent work examines the ways in which foreign influences on elections can polarize attitudes toward globalization. This research finds that when powerful countries take sides in other countries’ elections, attitudes toward economic cooperation with those countries become polarized along salient political and electoral cleavages.”

Maria Carreri: “My research focuses on urban politics and local political economy. When talking about globalization, we often focus on national leaders and on the policy choices of nation states and forget about the role of cities and of local governments. Cities are responsible for an increasing share of policymaking across the developed and developing world, and it is cities that often disproportionately feel the impact of globalization. At a time when right-wing populist governments are emerging across the world, often running on inward-looking platforms and promoting anti-immigration sentiment, cities are often moving in the opposite direction. Understanding urban politics and the policy challenges that arise as a result of globalization, and are unique to cities, is key to designing better policies for a globalized world.”

Michael Davidson: “Energy systems undergird many pressing global problems today, from climate change to human health inequity. My research examines how technologies, experiences and even institutional designs in energy are shared across disparate countries – and why we need to increasingly take a global perspective in order to improve well-being in the U.S. and the world.”

Joshua Graff Zivin: “My work has documented the wide-ranging and pernicious economic harms caused by pollution around the world, even at levels that were previously viewed as safe. This research has helped to transform policy debates around environmental protection, particularly in developing countries, which typically frame policies as a choice between investing in the environment or the economy, and now more frequently invoke the idea of investing in the environment for the economy.”

Gordon McCord: “A reimagined globalization is a world interconnected not only by commercial competition, but also by the shared challenge of keeping humanity within the planetary boundaries of resource use. I am part of the FABLE Consortium, which consists of national teams from 21 countries working to chart out sustainable land use paths to answer the question of how we can feed the global population, meet national and international conservation goals, and reduce greenhouse gas emissions from land use to net zero by 2050.”

Teevrat Garg: “A renewed commitment to globalization will invariably require addressing environmental inequities both within and across nations. I research the causes as well the consequences of these inequities, particularly on human capital – a critical ingredient to competitiveness in the global marketplace.”

Ulrike Schaede: “Initially, we thought of globalization as more and freer trade. Then, the location of production sites outside one’s own country was added to the mix, and this started the research on global supply chains and production networks. We are now entering Phase 3, where globalization is becoming a delicate power-balancing game that involves much more than just economic calculations. Take Japan’s new ‘aggregate niche strategy’ as an example: By strategically positioning at the high-upstream input portion of Asian supply chains, Japanese products have become indispensable for a large number of important tech products. While each of these input markets may be small, in the aggregate they add up to a situation where other Asian countries are resource-dependent on Japan. This is a new situation, and it is already reshaping geoeconomic and geopolitical strategies across Asia. Going forward, the interplay between politics and business will become even more important in shaping foreign policies.”

Emilie Hafner-Burton: “My research on human rights and international law exposes both the fundamental challenges brought on by the globalization of cooperation between states – including the rising power of autocracies in international institutions – as well as the many possibilities that globalization of the right flavor can offer for the protection and promotion of human well-being and security. While some massively repressive regimes seek growing political influence through international law as a means to water down human rights promotion and spread corruption, other governments seek to harness the many powers of globalization to enhance basic rights around the world.”

Elizabeth Lyons: “Much of my research focuses on how digital technologies are changing work around the world. For instance, as digital technologies facilitate remote and virtual work arrangements, labor markets and work forces are increasingly globalized. Understanding how these shifts impact worker productivity and optimal management practices is critical for understanding how firms and organizations can survive and thrive in the 21st century.”

Peter Cowhey: “Fears about economic competition and security risks originating from China have led a cadre of U.S. strategists to advocate a radical divorce of our two countries’ science and technology systems. A better path to revamping globalization would have the U.S. do the following: first, heal thyself – we should acknowledge that much of our worry over the challenge from China comes from lapses in U.S. policies that bolstered our science and innovation base; second, maintain global science and technology interdependence to the maximum feasible extent – U.S. leadership benefits from interdependence attracting innovators from around the world; and third, risk mitigation – focus especially on the long-run risks from continued interdependence and establish appropriate security safeguards in collaboration with like minded countries.”

Jesse Driscoll: “At GPS, our faculty shares a vision: we enlist our masters and Ph.D. students to assist us in the task of reimagining globalization by going out into the world, bringing home stories and datasets, and writing up what they find in the form of original research publications. I have just completed a practitioners guide entitled, “Doing Global Fieldwork” (forthcoming from Columbia University Press), meant to instruct graduate students on best practices for self-directed fieldwork overseas. It includes advice on practical personal ethics, learning a new language, interview techniques, how to engage in careful observation, thoughts on weighing data security and transparency, and more.”

Munseob Lee: “I work on understanding sources of low agricultural and industrial productivities in developing countries. This has an implication to understanding income convergence across countries and ending extreme poverty in low-income countries.”

Renee Bowen: “My work tackles the difficult question of how institutions can be designed to sustain the compromise and cooperation required to fully realize potential gains from globalization. Freer international trade has been a pillar of modern economies sustained through international cooperation, however a lack of domestic compromise has eroded support. My work focuses on the redesign of both domestic and international institutions needed to build consensus for freer markets.”

Nico Ravanilla: “As China’s economic, social, military and political heft has grown with globalization, the international security implications of understanding the South China Sea disputes have risen dramatically. The region, at the core of a rapidly growing Asia Pacific, has experienced growing levels of conflict in recent years due to overlapping maritime claims between Vietnam, the Philippines, Malaysia, Brunei, Indonesia and China. These disputes have provoked violent encounters between military and commercial vessels among these nations, as well as protracted diplomatic rifts and international court cases. Typically, rising powers are expected to engage in more aggressive behavior. However, with globalization growing economic and political interdependence since the end of the Cold War, it makes it difficult for China to unilaterally impose its will. The stakes could not be higher for understanding the dynamics of conflict in the region.”

Stephan Haggard: “Processes of globalization play a strong role for both Koreas, but in quite different ways. South Korea’s high-growth era and subsequent technological advance was fueled by its export-oriented strategy. As the economy has matured and growth has slowed, economic ties with China pose both opportunities and challenges. Is there such a thing as being too dependent on China? What are the risks? For North Korea, sanctions have taken a huge bit out of a struggling economy, now compounded by COVID-19. North Korea is a prime example of globalization in the gray zone, where commercial trade – mostly with China – is combined with smuggling and a host of illicit activities in order to survive.”

Rafael Fernández de Castro: “My work – both in research and inside the classroom, focusing on U.S.-Mexican contemporary relations – has opened eyes on both sides of the border about the complexity of this intense and asymmetrical bilateral relationship. The level of interconnectivity between both countries’ populations is not always evident, but there are 38 million people in the U.S. that are of Mexican ancestry. Mexico is the country with the largest number of Americans – close to 2 million. I believe my students, a lot of them who are now career diplomats and policymakers, are aware of the high level of interdependence between these two nations and will contribute to solving disputes and strengthening binational cooperation for generations to come.”