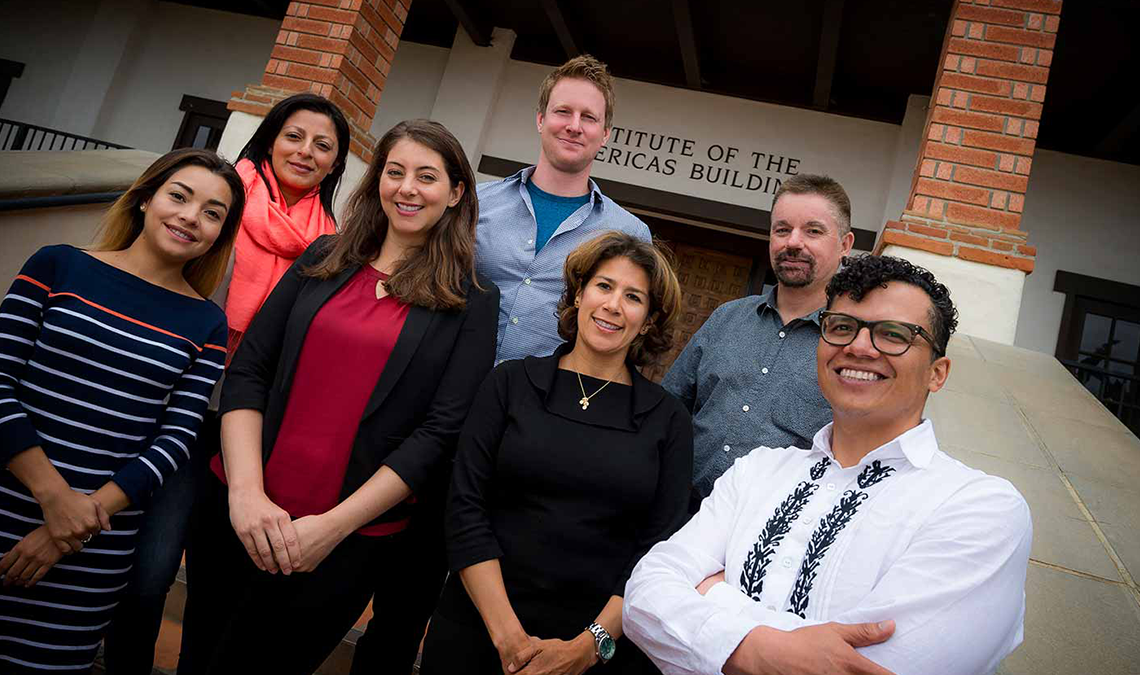 The Center for U.S.-Mexican Studies at the University of California San Diego released preliminary findings from its groundbreaking cross-border education study, which provides insight into the educational aspirations and professional trajectories of young people in San Diego and Tijuana.

Initial results show that students in the two cities have strong connections to both sides of the border and big dreams for their futures that often involve living and studying in both countries. They rely heavily on their schools to help them prepare for the future, and a wide majority believe that schools and teachers do a good job of orienting them to the range of pathways available to them as they transition to adulthood.

However, many students also cite significant barriers to achieving their dreams, including the cost of university and information about further academic opportunities available to them. UC San Diego students in class as part of the Mexico Migration Field Research Project, a yearlong, three-part course that in part formed the foundation for the study.

The study surveys approximately 6,500 students in 9th and 10th grades across 60 schools in San Diego County and the municipality of Tijuana. The questions sought to better understand student engagement and aspirations, with a focus on the ways in which the migration of young people between the U.S. and Mexico creates both risks and opportunities.

The research was undertaken by the Center for U.S.-Mexican Studies (USMEX) at UC San Diego’s School of Global Policy and Strategy, the Civil Rights Project at UCLA, El Colegio de la Frontera Norte (COLEF) and the Universidad Autonoma de Baja California (UABC)’s Department of Economics and International Relations, through support from the UC-Mexico Initiative.

“The University of California continually shows its leadership in promoting and enhancing the binational region. UC San Diego is proud to be a committed partner in this effort, along with our affiliates and academic institutions in Mexico,” said UC San Diego Chancellor Pradeep K. Khosla. “This study in particular shows the importance of increasing access to educational opportunities, as these young students seek a higher education and become future drivers of our economies.”

Under direction from USMEX interim director Melissa Floca and Civil Rights Project co-director Patricia Gandara, a team of undergraduate and graduate students from UC San Diego, COLEF and UABC surveyed the largest sample of students in the cross-border region to date. This first-of-its kind study in part raises questions that have a direct effect on regional competitiveness and the future of the binational workforce.

“As anticipated, we discovered that an overwhelming number of students have been educated on both sides of the border with deep connections to both countries,” Gandara said. In addition to her position at the Civil Rights Project, Gandara is a research professor at UCLA’s Graduate School of Education and Information Studies, and an expert in binational education. She is the Education Working Group chair of the University of California’s Mexico Initiative. The researchers believe the work has the potential to inform policy in California and Baja California to respond to the specific needs of the shared student population. Full findings from the project will be released in September in the report “The Students We Share: A Cross-Border Workforce Development Priority.”

“For policymakers on both sides of the government, this shows the need to provide educational options that can fully develop the amazing potential of young people who grow up in both countries,” Gandara said.

The group’s research also shows that students have a tremendous desire to pursue higher education, with almost all indicating they believe a four-year university degree is necessary for success, and with the majority indicating that they will attempt to attend university. However, a significant number of students also believe that financial obstacles might force them to leave school before they want to, a reality that researchers can see playing out in the region.

“It is critical to our region’s competitiveness to identify both the needs and the resources that currently exist to support the young people who will form the labor force in the coming years,” Floca said. “Despite a growing understanding of the cross-border nature of our region’s economy, workforce development is often not considered from a binational perspective.”

The survey results show that students rely heavily on teachers and counselors to help them identify future opportunities, underscoring the importance of the schools in the region in helping young people transition into higher education and the workforce.

“These students are especially well suited to participate in the binational economy because of their cross-border cultural fluency, and supporting their educational success should be a major regional workforce development priority,” Floca said.

But the problem, Gandara and Floca say, is that the flow of young people back and forth across the border for schooling can derail the educational trajectories of those who are not able to adapt to pressures caused by migration. Aspirations are high, the study finds, but turning these aspirations into positive outcomes by connecting students to future educational and professional opportunities is key.

“We ought to be investing in these kids, rather than letting them fall through the cracks,” Gandara said.

The research was conducted as part of UC San Diego’s Mexico Migration Field Research Project and includes a yearlong, three-part course that allows students to learn about conducting fieldwork in Mexico, go into the field to gather data and then aid in authoring publications based on that data.

Additionally, several students in the course also participated in research for the “Healthy Minds, Resilient Communities” program, learning best practices for promoting mental health in the border region. Results from that field work, conducted in a partnership with UC San Diego Health and UABC, were released May 14.

The intention is to begin a dialogue that will continue throughout the 2016 – 2017 academic year, as researchers expand on the initial data collected.

The research is supported by the UC-Mexico Initiative. The initiative’s mission is to harness the strengths, expertise and resources of the University of California system and its partners in the U.S. and Mexico in order to educate the next generation of leaders, bring research to bear on developing innovations and addressing common problems, inform public policy, and increase linkages to Mexico. Gandara, Floca and a team of representatives will present their findings at an invitation-only UC-Mexico Initiative symposium in Mexico City mid-September.