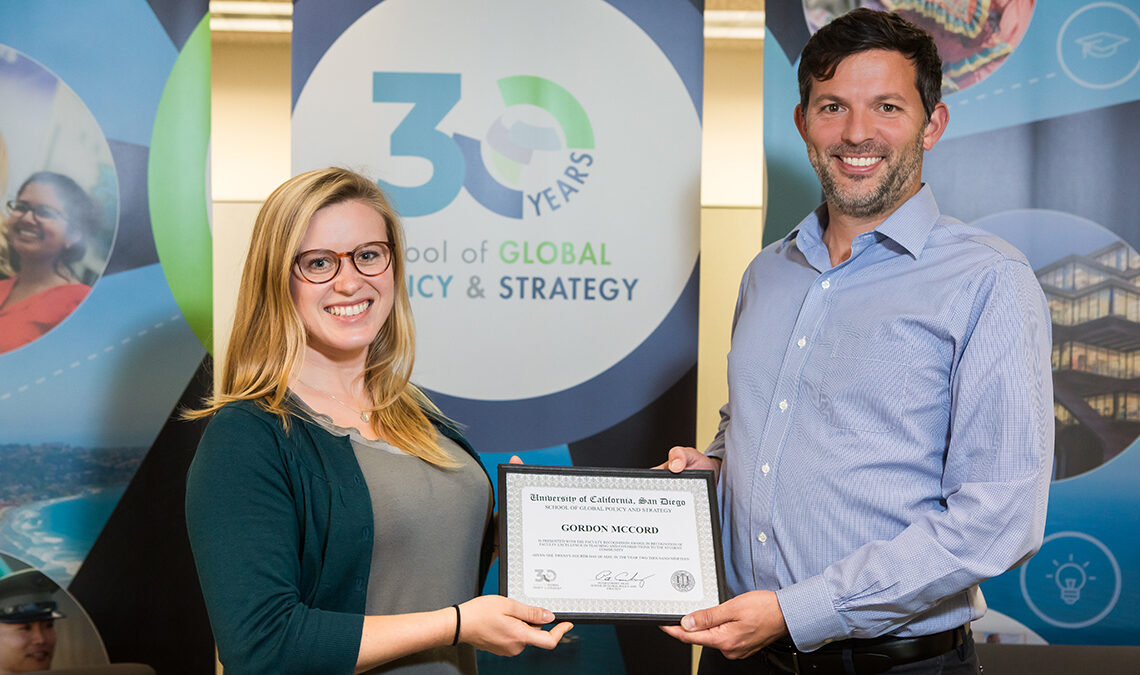 A glimpse into Assistant Professor Gordon McCord’s academic and professional backstory, plus who guided him along the way. 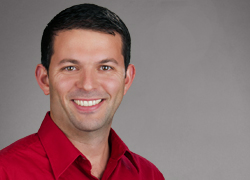 Gordon McCord had who some would consider the mentor of a lifetime.

From riding in the back of a pickup truck in Kenya to feverishly taking notes on foreign aid at high-level meetings at the U.N., he literally was beside Jeffrey Sachs in the frontlines of the fight against poverty.

In less lavish terms, “I was a shadow,” McCord said of his job as a special assistant to the world-renowned expert on economic development.

“I was a node of information between Jeff and the hundreds of people in his orbit we worked with to keep things moving,” McCord reflected. “I very much admired Jeff’s emphasis on the interdisciplinary lens through which one should understand the dynamics of human society and particularly the dynamics of poverty.”

Now, as an assistant professor at the UC San Diego School of Global Policy and Strategy (GPS), McCord no longer outwardly follows in Sachs’ footsteps. Rather, he draws from the experience to plot his own interdisciplinary approach to combat poverty—still co-authoring with Sachs along the way. And he instills that same mentality in his students.

“In how I engage with students in class, I give something more than straight-up economics because the angle at which I come at a problem involves other fields of knowledge,” he said. “If you really want to understand poverty, you should know a little about disease, agriculture, water availability and climate because these things are really important in determining the well-being of people.”

With such an informed academic palate, McCord said he has no particular regional focus at GPS, understandably.

“I’ve always looked at the globe as just what I’m interested in,” he said.

However, over the years and namely through his work with the U.N., he gravitated toward public health policy as a main research interest.

“That’s something I not only thought was important, but I viscerally enjoyed tackling,” he said. “There’s certainly a part of me that would have liked to be a medical doctor. But this is as good, or maybe even better.” 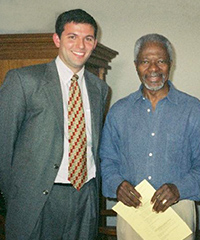 The tradeoff? Instead of healing people one by one, he has a hand in healing populations.

It took not long into his freshman year at Harvard University for McCord to come to this realization. In fact, it was a guest lecture Sachs delivered to McCord’s intro to economics course that was the spark.

“It (economics) was mildly interesting, but not something I would dedicate my life to … until this lecture by Jeff on development,” recollected McCord, majoring in physics at the time and taking the economics course as an elective. “The first slide was a map of the world with the countries colored according to the level of income. He explained his life is dedicated to understanding why this map looks like this. I said (snaps fingers), ‘That’s what I want to do.’ No more physics after that.”

After switching majors to economics, he went on to be an undergraduate fellow at Harvard’s Center for International Development, which Sachs headed up.

Immediately after graduation in 2002, Sachs invited McCord to join him at Columbia University. As a special assistant, he helped Sachs with his “day-to-day.” Among other tasks, that entailed assisting him in directing the Earth Institute, a compilation of 30 research centers devoted to advising on sustainable development; and building the U.N. Millennium Project, a group tasked with recommending to the U.N. Secretary-General an action plan for the world to achieve the Millennium Development Goals to reduce poverty.

McCord ultimately enrolled in Columbia’s new Ph.D. program in sustainable development and graduated in its second cohort in 2011.

“You’re trained from the beginning that science really matters if you want to understand something like poverty or climate change,” he said of the program.  “So, as a social scientist, you don’t learn about these other things on the fly later and discover they’re important.”

“This is a fantastically exciting place for me to be,” he said. “UC San Diego has unparalleled institutions in climate science, medicine and engineering.  You can’t just be an economist and pretend to have something useful to say about the environment or climate change; you actually have to engage with the science. … Our students value that. My colleagues, of course, value that. And, needless to say, the scientists­­­ I engage with are excited about working together.”