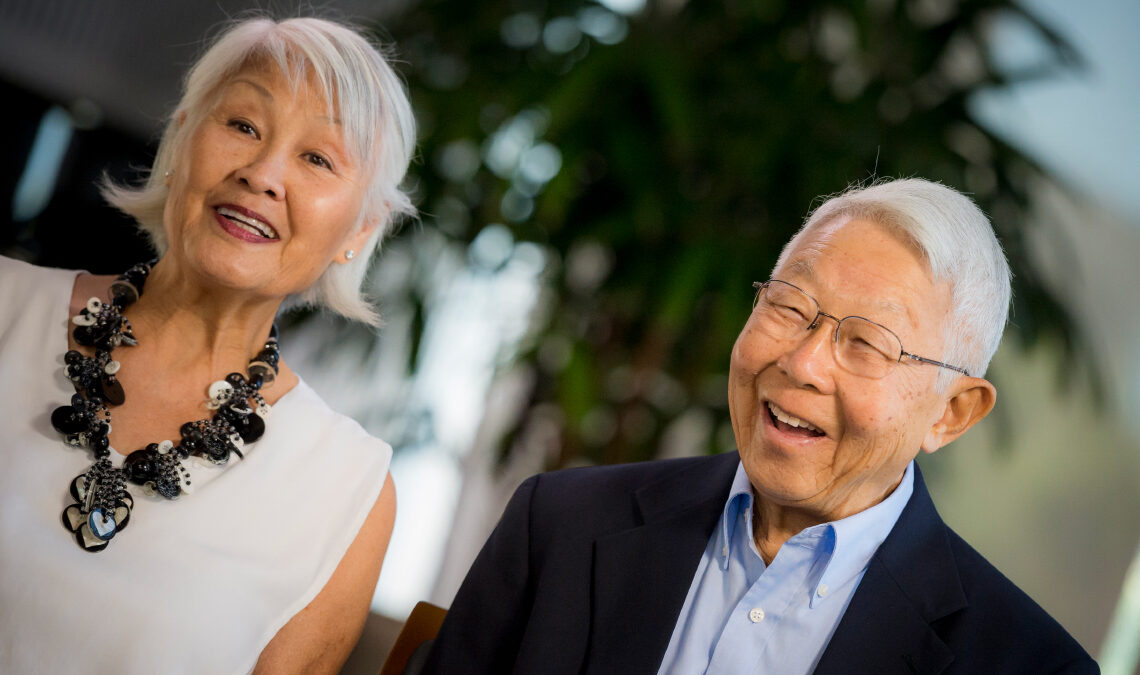 Beginning his support to the campus in 1975, Kwan So was an early advocate for UC San Diego and helped grow its research scope and influence in international relations and China studies

Businessperson, community leader and philanthropist Kwan So has died at the age of 89.

Kwan and Marion So’s support of the university began in 1975, with a gift to support the Chinese Student Emergency Loan. In the decades that followed, Kwan So forged a strong bond with UC San Diego, playing a key role in helping to position UC San Diego as one of the world’s top universities for education and research on contemporary China.

In addition, he supported areas including undergraduate education, Health Sciences and Scripps Institution of Oceanography. So also served on the UC San Diego Undergraduate Scholarship Council since its inception. The Sos are Lifetime Chancellor’s Associates, and generously gave to establish endowed chairs, scholarships and fellowships at UC San Diego.

Kwan and Marion So were recipients of the 2016 Chancellor’s Medal, one of the highest honors given by UC San Diego for exceptional service in support of the university’s mission.

“Kwan So was a beloved friend of the UC San Diego community who has positively influenced the campus, our community and the world over the span of nearly five decades,” said Chancellor Pradeep K. Khosla. “Kwan will be deeply missed for his service, leadership and generosity.”

With a passion for helping the U.S. and China have a better understanding of each other, the Sos provided generous support to the School of Global Policy and Strategy, establishing the Ho Miu Lam Fellowship, the So Kwan Lok Chair in Chinese International Affairs and the Ho Miu Lam Chair in China and Pacific Relations. Kwan So’s vision and sustained commitment to building the campus’ expertise in China culminated in the founding of the 21st Century China Center, regarded as one of the top centers in the world for research on contemporary China and U.S.-China relations.

“From the earliest days of the school when we had only two faculty focused on China, Kwan encouraged us to dream big and build the leading program on China in the nation,” said Susan Shirk, professor emeritus at the School of Global Policy and Strategy and chair of 21st Century China Center.  “The success of the 21st Century China Center derives directly from his enthusiasm and the support by him, Marion So, and indeed, the entire So Family.”

The Sos’ support has helped UC San Diego and the School of Global Policy and Strategy earn the distinction as having one of the largest concentrations of scholars studying contemporary China among North American universities.

The couple also established the School of Global Policy and Strategy’s signature So Kwan Lok Distinguished Lecture Series to bring top leaders and thinkers from China and elsewhere to offer front-line insights and analysis of the most pressing social, economic and political trends in China and U.S.-China relations. The 2022 So Kwan Lok Distinguished Lecture took place on Nov. 15 with Professor William Kirby of Harvard University. School of Global Policy and Strategy Dean Caroline Freund, as well as the school’s two preceding deans, Peter Cowhey and Peter Gourevitch, gathered at the event to pay tribute to Kwan’s memory.

“Kwan will be greatly missed and he leaves a rich legacy that can be felt across the university and in the community more broadly,” said Freund. “Kwan himself was focused on promoting the study of China and especially in recent years, U.S.-China relations. We are extremely proud of his contributions that have been a major catalyst to our uniquely strong China programs at the school and across campus. His innovative spirit has left an indelible mark on scholarship across the Pacific.”

Barry Naughton, a highly respected economist working on China, holds the So Kwan Lok Chair of Chinese International Affairs at the School of Global Policy and Strategy.

“The first thing that you have to say about Kwan is that he was personally caring, thoughtful, and above all, a decent, genuine human being,” said Naughton. “He had a huge impact on the development of the study of China at UC San Diego, because he was an early supporter who provided crucial resources to what was then essentially a start-up, but also because he continuously pushed us to think bigger, to always ask ‘are we doing enough?’”

So was the longtime president of EVG Enterprises Inc., a property development company. He received his bachelor’s degree from Georgia Tech, and his master’s in engineering from Massachusetts Institute of Technology.

In lieu of flowers, the family has asked that donations can be made in his memory to the UC San Diego Foundation for the 21st Century China Center Endowment (Fund #K2397).

A celebration of life memorial service will be held at the Scripps Seaside Forum at 11 a.m. on Sunday, Dec. 18, 2022.

By GPS Media
6 Mins read
The annual United Nations climate conference (COP) has ballooned over the years into a massive climate festival: nearly 50,000 people — an all-time record — taking part in the rituals of formal diplomacy and, in parallel, a flashy climate change expo. So what came of it?
Community

By Virginia Watson
4 Mins read
Check out our faculty’s picks for their favorite recent read, from a revelatory book about the pre-Columbus Americas to one focusing on the creative process of songwriting