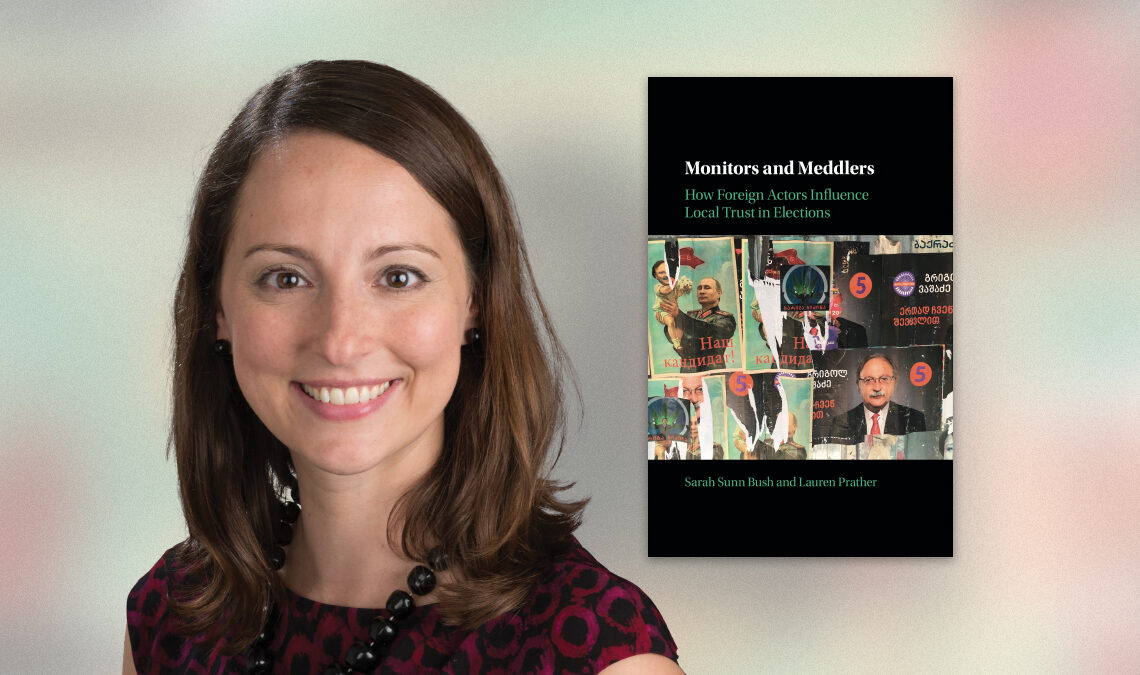 Lauren Prather’s new book “Monitors and Meddlers: How Foreign Actors Influence Local Trust in Elections” has been a long time in the making — a full decade, in fact.

“We were talking about the relationship between election monitoring and election fraud. At the time, the research suggested that the presence of international monitors had the potential to increase the quality of democracy because candidates and parties are less likely to cheat if they know international monitors are going to be there to observe the election,” Prather said. “But we wondered, what do voters think when they see these international actors in their polling stations? Does that influence people?”

Prather and Bush realized in that one dinner conversation the importance of the then-little-researched influence of international actors on elections, sparking 10 years of research that culminated in “Monitors and Meddlers,” which was published by Cambridge University Press in August.

In this Q&A, Prather dives into the credibility of elections across the globe — and how confidence in an election’s outcomes can be affected by the presence of election monitors and foreign election meddling.

The Jan. 6 insurrection in the U.S. showed us that people’s beliefs about elections — whether it was free and fair, whether there was fraud, whether they trust the outcome — are incredibly important to peace and security, not just to democracy.

This makes the book timely for any country having an election in the next several years because I don’t see meddling or monitoring going away as a dimension of intervention that international actors are pursuing.

What would you say is the intended audience for this book?

We think this book has the potential to reach the American public but also potentially international audiences. Foreign meddling is something that is very much on the minds of a lot of citizens around the world. In fact, it’s somewhat unusual that the U.S. was a victim of meddling because it’s a relatively powerful country. We tend to think of meddling as being something that the U.S. and other powerful countries do to less powerful countries around the world. So this book would be good for practitioners who are promoting democracy around the world or leaders and political elites in other countries that want to try to understand the effects of both monitoring and meddling on their citizens.

Within the U.S., folks that are interested in understanding how international monitors can be used to improve confidence in U.S. elections, or understanding how the recent history of meddling has potentially shaped American trust in elections could make use of our book. I think those questions are answered in the book and would be of interest to American practitioners and political leaders.

In terms of academic research on elections, one of the strongest things about our book is that we are taking an issue that has been studied mostly at the country level and trying to understand the effects on individuals. Most previous research has focused on the electoral process or trying to understand why countries invite monitoring or meddling. Our book adds another dimension to that research, which is to bring our understanding down to the level of the citizen. We gathered a lot of data from three different countries across six different elections and interviewed more than 6,000 people for the book. This is a really tremendous theory and data exercise, and we think it’s a contribution to the academic literature.

What are you hoping is the takeaway for readers of this book?

Practitioners and political leaders have intuitions about the effects of international actors’ interventions in elections on local populations. So you’ll see pundits worrying that meddling is going to undermine confidence in elections or that election monitoring will increase confidence. The book provides a theory for why international actors could have these effects.

But in so doing, we also talk about the limits of international actors’ influence, and we actually demonstrate that the effects are more nuanced than the conventional wisdom suggests. International actors only have an effect on citizens’ beliefs about elections if the monitors are viewed as capable and neutral. Meddlers, by definition, are not neutral, but their capabilities matter. We find that if you tell people that a country was poking around in an election but it didn’t have an effect, that doesn’t undermine their trust. It’s only when they think that the meddling was consequential and changed the election result that their trust is undermined. So that’s one way that we add some nuance to the conventional wisdom, which is that the characteristics of foreign actors really do matter, that it’s not just any monitoring group or any meddler that’s going to change public opinion about elections.

The second condition that we put on the conventional wisdom is that the characteristics of the individual citizens matter, and in particular whether they supported the winning or losing party. So it’s not just that an international monitor can be at an election and make an announcement that the election was great, and then that’s going to change everybody’s minds about the election. We actually show that supporters of losing candidates and parties are very difficult to persuade, especially in a positive direction. And we think that this is a potentially troubling finding for a democracy because losers are precisely the people that we would want to instill confidence in.

It’s also a warning, because if an organization is calling out an election — or even if monitors think the election was good, but it had some flaws — losers may be particularly persuaded by evaluations that point out those flaws and feel even more pessimistic. Furthermore, with the losers, if you tell them that there was meddling, they can be pretty disheartened by that news. Winners, on the other hand, who now hold the policy reins and can actually make the changes to protect elections from future meddling, are not as troubled by the meddling. They don’t lose confidence in the election and they therefore may not make the changes that one would need to protect elections.

What other projects are you working on?

I’m working on a UC Institute on Global Conflict and Cooperation (IGCC) project with some other folks at UC San Diego and GPS, as well as with Sarah Bush, on a project on authoritarianism and international organizations. My particular piece of that project is looking at this phenomenon of zombie monitors.

There’s this whole other world of election monitoring that is really meddling. Essentially, authoritarian countries like Russia and China have realized that they can mimic high-quality international election monitoring but use it to validate fraudulent elections. So, for example, European and American organizations send missions to countries to evaluate whether the election conforms to international and local principles of democracy, and they’re going to issue a report and say whether it was good, bad or mixed.

On the flip side, you have organizations that are run by Russia and China that are also sending monitors from state-sponsored organizations that have names that are trying to mimic more democratic organizations, but they never issue negative evaluations. They’re always there to say, “These elections were great. They were free and fair. This person clearly won in a fair process, and you should definitely trust that outcome and not protest.” These efforts support autocratic leaders who hold fraudulent elections.

In this project, we are collecting data on every monitoring group that has visited elections around the world since 2000, with a specific focus on trying to include these zombie organizations that are just there to validate. We want to understand why countries invite these monitors. What are the characteristics of countries that have these zombie monitoring groups present? And then to understand the effects, we’re looking to conduct a survey in an authoritarian country that holds elections and see if this validation exercise works to trick citizens.

Another related project is also with Sarah Bush, my coauthor on the book. We’ve launched a new project to try to understand what countries are doing to prevent foreign meddling in their elections. Right now I’m working with a GPS graduate student to begin collecting data on countries’ election laws. We are focusing our data collection effort on election laws designed to detect and deter election meddling by foreign countries. We are trying to understand the variation across countries and how much regulation there is of foreign influence.