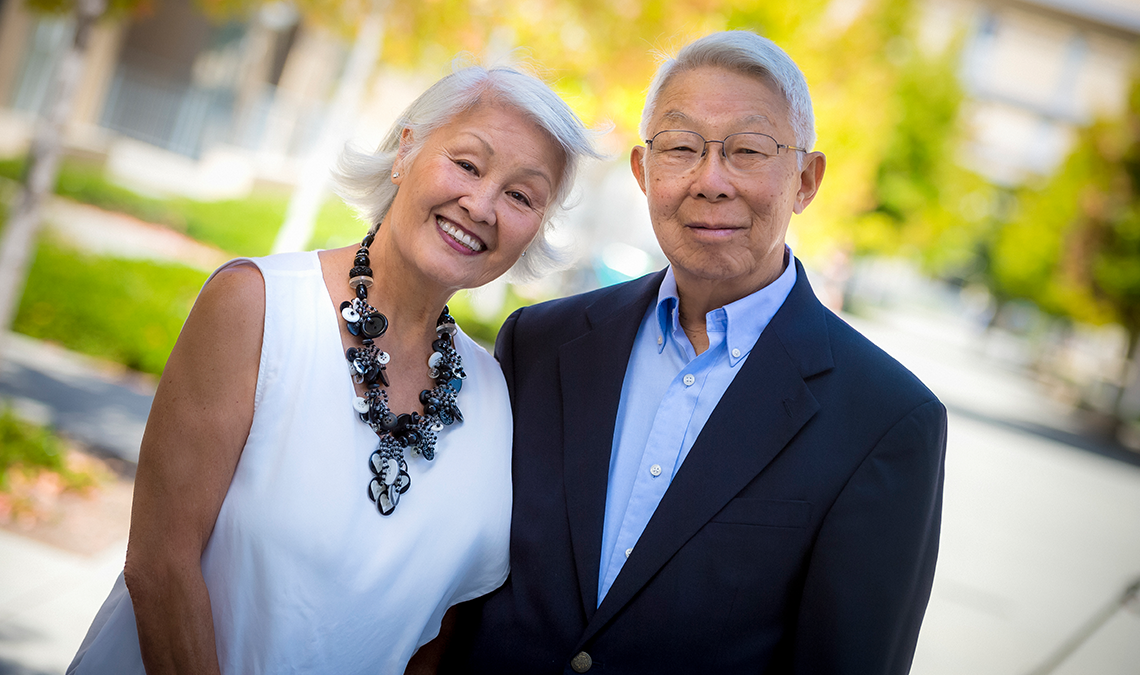 Marion and Kwan So
PDFPrint

We honor UC San Diego’s 2016 Chancellor’s Medal recipients Marion and Kwan So, as told through the eyes of those at GPS they’ve impacted deeply

Exactly 30 years ago, Peter Gourevitch took a gamble on leading a new institution at UC San Diego, one anchored in teaching international relations with a focus on the Americas and Asia. Central to getting the UC San Diego School of Global Policy and Strategy (GPS) on the map were the supporters and believers who had faith in Gourevitch and his counterparts to do so.

Marion and Kwan So were both.

“They saw our importance and promise when we were very new, very small, with few faculty and few linkages, without a track record or alumni to show what we could do,” recalled Gourevitch, founding dean of GPS. “Marion and Kwan So saw us as important to the university, to San Diego, to the U.S. and to the Pacific region.”

Beginning with their first gift of $7 to UC San Diego in 1975, Marion and Kwan So—an international real estate executive and president of EVG Enterprises—have made an unwavering impact on UC San Diego by supporting undergraduate education, the health sciences, Scripps Institution of Oceanography and, graciously, GPS.

Charting a course of goodwill

Since their first humble gift to the Chinese Student Emergency Loan more than four decades ago, the Sos have dependably channeled their philanthropy across campus. This includes establishing the Ho Miu Lam Endowment Fellowship Fund in 1992 and, five years later, the Sokwanlok Distinguished Lecture Series.

In the past 10 years, in addition to supporting GPS’s renovation and innovation funds, the Sos established the Sokwanlok Chair in Chinese International Affairs, held today by GPS Professor Barry Naughton, and the Ho Miu Lam Chair in China and Pacific Relations, formerly held by GPS Research Professor Susan Shirk.

“The Sos helped me greatly in my years as dean (of GPS), offering moral and personal support, building a network in the community and the campus,” Gourevitch noted. “They were key in our ability to retain faculty like Barry Naughton and Susan Shirk, who thereby became a magnet to attract the excellent students who now make up our strong alumni base.”

As one of the founding and longest serving members of GPS’s International Advisory Board (IAB), formed in 1986, Kwan So generously lends his advice to aid the dean in achieving the vision and mission of the School. This year, he also joined UC San Diego’s Foundation Board of Trustees.

At the same time, Marion So advocates for international education across UC San Diego, serving as a long-time volunteer and “Friend” of the International Center on campus. Committing more than 20 years to the center and donating to its resale shop, Marion So has also played an important role in encouraging undergraduate students to pursue graduate degrees.

Consider Candice Yu ’10, who as an undergraduate student in international studies at UC San Diego received the So Family Endowed Undergraduate Scholarship for Education & Opportunity Abroad—which the Sos established in 2009—to study abroad at Fudan University in Shanghai. Upon her return, eager to advance her interest in U.S.-China relations, Yu applied and became one of the first students accepted to GPS’s BA/MIA program. As a graduate student, she interned for Kwan So.

From organizing GPS students to row in the Chinese Historical Museum’s annual dragon boat races to encouraging the founding of GPS’s 21st Century China Center—the Sos have played a key role in making GPS what it is today and positioning UC San Diego as one of the world’s top universities for research on contemporary China.

By Christine Clark
3 Mins read
Beginning his support to the campus in 1975, Kwan So was an early advocate for UC San Diego and helped grow its research scope and influence in international relations and China studies
DegreesPhilanthropyStudents