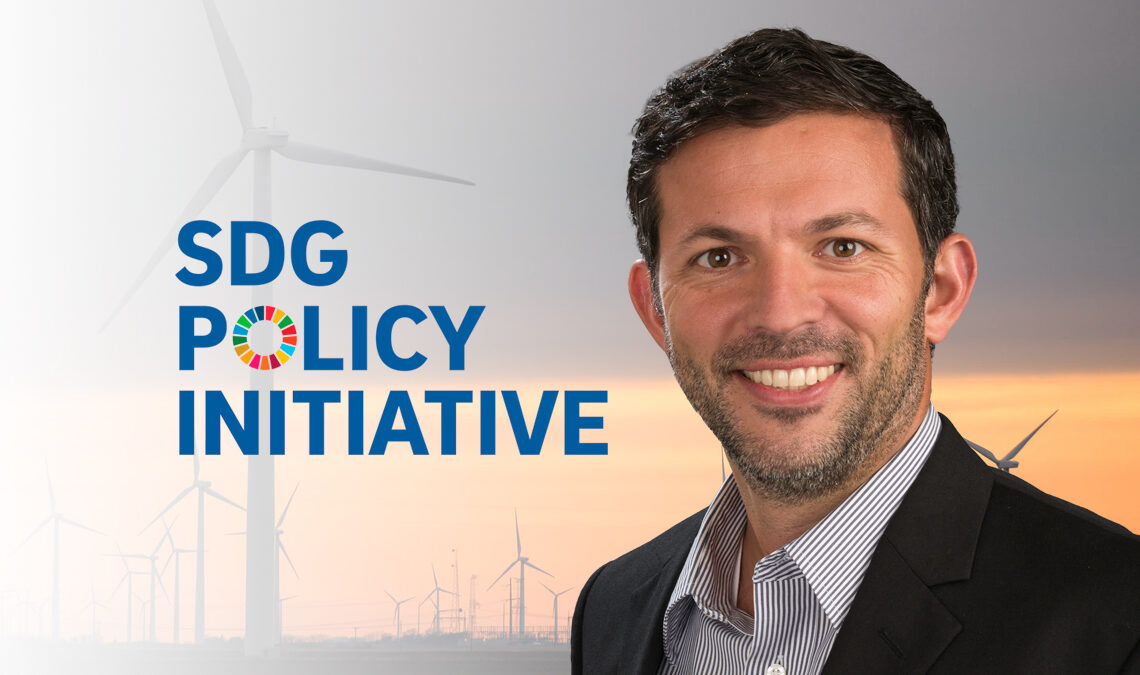 The SDG Policy Initiative and its partners lay out a new framework for the world to meet carbon neutrality goals, with a focus on leaving no one behind

One of the most dire threats facing the world right now is the ever-widening equality gap, leaving many people across the globe facing hunger, lack of clean water and sanitation, limited access to healthcare and a number of other pressing issues.

Those in academia who conduct research on these topics sometimes find a disconnect between the latest research and policy that is being shaped by government officials. That’s where the SDG Policy Initiative (SDGPI), based at the UC San Diego School of Global Policy and Strategy (GPS), steps in.

“Here at GPS and on the UC San Diego campus, we are lucky to have some of the world’s foremost thinkers in everything from engineering to ocean science and, of course, policy,” said professor and SDG Policy Initiative director, Gordon McCord. “SDGPI is focused on ensuring that good policy analysis and medium-term science-based frameworks are available to the policymakers who need them, including those here in San Diego.”

SDGPI focuses on the Sustainable Development Goals (SDGs), which were adopted by all 193 members of the United Nations in 2015 with the mission to achieve prosperity and environmental sustainability while “leaving no one behind.” SDGs set goals through global consensus on where the world should be by 2030.

“The slogan of ‘leave no one behind’ represents a new approach to policymaking where those further from living to their potential are considered first. This not only pushes us to support poverty reduction, equality and inclusion around the globe but also should inspire us to look for those left behind in our own country,” McCord said.

McCord added that the novel coronavirus pandemic as well as the Black Lives Matter protests have brought inequality to the forefront of everyone’s attention. The SDGs are a useful way to ensure that in discussions on climate, jobs, gender and sustainability, everyone constantly considers which voices are missing at the table and which groups have the greatest need.

“New frameworks take time and require champions in government, but I think our local and regional leaders will welcome an opportunity to rethink the way San Diego sets goals and plans for the future,” McCord said. “Of course, the process of aligning global goals to a national or local scale requires adapting them to local realities. As we work in Paraguay, Mexico or San Diego, we see that the power of the SDGs is that these agreed-upon goals bring all sides and organizations together.”

McCord said some of the largest companies in San Diego, such as Qualcomm, Illumina and Hilton, already track their progress on SDGs. If the City of San Diego wanted to partner with one of these actors, they all come to the table with an understanding and commitment to the same goals.

“The same is true in collaborating with other countries,” McCord continued. “In Mexico, the SDGs are used by the federal government in their budget process. Collaboration with our neighbor Tijuana on meeting the SDGs in the border region would be something natural for Mexican officials.”

With new leaders recently elected at the local, state and federal levels, SDGPI has helped to promote a number of action plans for new administrations, such as the Zero Carbon Action Plan (ZCAP), put together by dozens of experts from around the country and launched in October.

“The plan is based on a scientifically rigorous pathway to decarbonization and lays out the policies in the power, transportation, buildings, materials, land use and other sectors that the federal government could adopt to put the country on a path to carbon neutrality by 2050,” McCord said.

The idea is simple, McCord shared: if the U.S. is to achieve net zero carbon emissions by 2050, which every country needs to strive for to keep the planet at the 1.5 degrees warming target set in the Paris Climate Agreement, then the country needs a plan.

“Before President Eisenhower built the interstate highway system, there was a comprehensive plan on how it would be done; that is, broadly speaking, how ZCAP works,” McCord said.

Initially, experts conducted a modeling exercise to understand the technically feasible pathways to achieving zero carbon by 2050. Then, the group of experts were divided into working groups to develop the policies necessary to achieve those pathways.

“The ZCAP offers a detailed policy framework for the federal government, including on power generation, transportation, buildings, materials, land use, states and cities, and an overarching emphasis on job creation and a just transition,” McCord said. “There has been a tremendous amount of positive feedback, and we hope it can help to organize priorities in the incoming administration.”

Sustainability in food and land use

In another related sustainability push across networks, McCord also co-authored the U.S. and Mexico chapters of the Food, Agriculture, Biodiversity, Land-Use and Energy (FABLE) Consortium’s recently released Second Global Report. Similar to the ZCAP, the FABLE report is a plan focused on achieving sustainability in food and land use across the globe.

“Land use – and changes in how land is used – accounts for 23% of greenhouse gas emissions globally, biodiversity loss is accelerating at alarming rates and the food system is producing both widespread undernutrition and obesity,” McCord said. “FABLE’s modeling will inform government decision-making on sustainable land management, as well as planning processes for conservation and climate policy.”

McCord said FABLE’s goal is to explore questions such as: How do changes in dietary patterns affect agricultural and pastureland expansion? How do we expand protected areas while feeding the population? How extensive do reforestation programs need to be to achieve net zero greenhouse gas emissions from the land sector?

How students can get involved

Joe Bettles (MPP ‘21), a graduate student researcher with the SDG Policy Initiative and San Diego native, said the universality of the SDGs makes them a valuable framework to have the opportunity to work with while in graduate school.

“If I go to an employer and say, ‘I produced a policy analysis to help a community achieve the goals of SDG 11, Sustainable Cities and Communities,’ the work I did while in grad school becomes immediately understandable and set within a real world context,” Bettles said. “I feel lucky to have the opportunity to work on several things I care deeply about, furthering the international agenda on sustainability and contributing to the region where I am from.”

Bettles emphasized that regardless of a student’s skills or experience, there is room within the SDG framework to contribute.

“I have a background in performing and have been able to bring creativity and experience with communication to my work with SDGPI,” he said. “Students with skills or interests in data analysis, business, gender, conservation, inequality, political systems or urban design are all needed in the effort to further the goals of the SDGs. They are a useful frame for policy work that can be applied to communities everywhere.”

McCord said that in 2021, SDGPI will engage in exciting new opportunities to partner with local policymakers to advance the SDGs in our region.

“We have learned that the SDGs provide clear quantitative targets that can help make good policy, and we hope to implement what we’ve learned in other parts of the world here at home,” McCord said.

The urgency of these complicated issues facing our global society should not be taken lightly, McCord said.

“There really is no time to lose before bridging science to policy.”