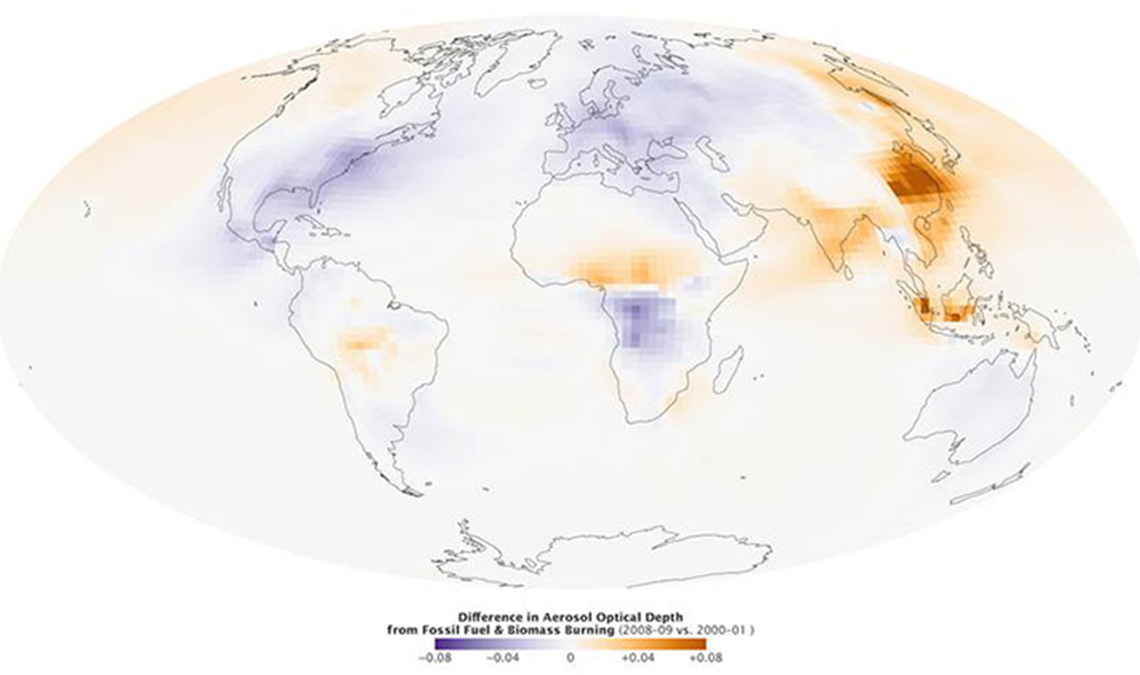 As climate instability increases across the planet, limiting global surface air temperature increase above pre-industrial levels to an average of 2° C (3.6° F) has become a popular metric for success in the public eye.

But a pair of researchers at UC San Diego argues that the goal is a misleading one. Though it is a relatively tangible concept to appreciate, the standard does not correlate well to prescribed government actions such as limiting fossil fuel use or establishing carbon markets. It also provides fodder for those factions advocating little or no action on climate who use the recent flatlining of global air temperatures to argue that scientists’ climate change projections contradict reality.

“Scientifically, there are better ways to measure the stress that humans are placing on the climate system than the growth of average global surface temperature — which has stalled since 1998 and is poorly coupled to entities that governments and companies can control directly,” write authors David Victor and Charles Kennel in the Oct. 2 issue of the journal Nature.

(Researchers at Scripps Institution of Oceanography at UC San Diego are among many who have offered explanations for the apparent hiatus in surface air temperature since 1998, the year the planet last experienced a major El Niño warming event.)

The 2° C standard was introduced into climate negotiations as a target nearly ten years ago. But Victor, a professor of international relations at UC San Diego’s School of International Relations and Pacific Studies (IR/PS), and Kennel, director emeritus of Scripps, argue that the goal should be discarded because it is very likely to prove unattainable and leads to a lack of international cooperation.

“Because it sounds firm and concerns future warming, the 2 °C target has allowed politicians to pretend that they are organizing for action when, in fact, most have done little,” the authors write. “Pretending that they are chasing this unattainable goal has also allowed governments to ignore the need for massive adaptation to climate change.”

Also, they note, several planetary vital signs paint a truer picture of climate and should inform the setting of targets for climate action among governments. The authors note that 93 percent of the excess heat on Earth is absorbed into the oceans, an intake that would not be immediately evident in air temperature changes though its consequences are significantly longer lasting. They also observe that a region much more sensitive to climate change than the planet as a whole, the Arctic, has warmed considerably at a rapid rate since 1998. More direct measures of mitigation success than the temperatures people experience daily, they add, are the observations of greenhouse gas concentrations in the atmosphere that several research centers around the world have made for many years.

“Patients have come to understand that doctors must track many vital signs — blood pressure, heart rate and body mass index — to prevent illness and inform care. A similar strategy is now needed for the planet,” Victor and Kennel conclude.

The authors acknowledge that the political difficulties of selling society on a radical overhaul of the way it meets its energy needs requires a simplification of the issue that makes a temperature-based standard convenient. The complexity of other climate indicators and the lack of any other index with which to measure progress has allowed the air temperature threshold to establish itself as the benchmark of mitigation.

“A temperature goal does not tell what countries should do to achieve it,” Kennel said. “When diplomats negotiate for a temperature goal, they do not know what they are signing up to.”