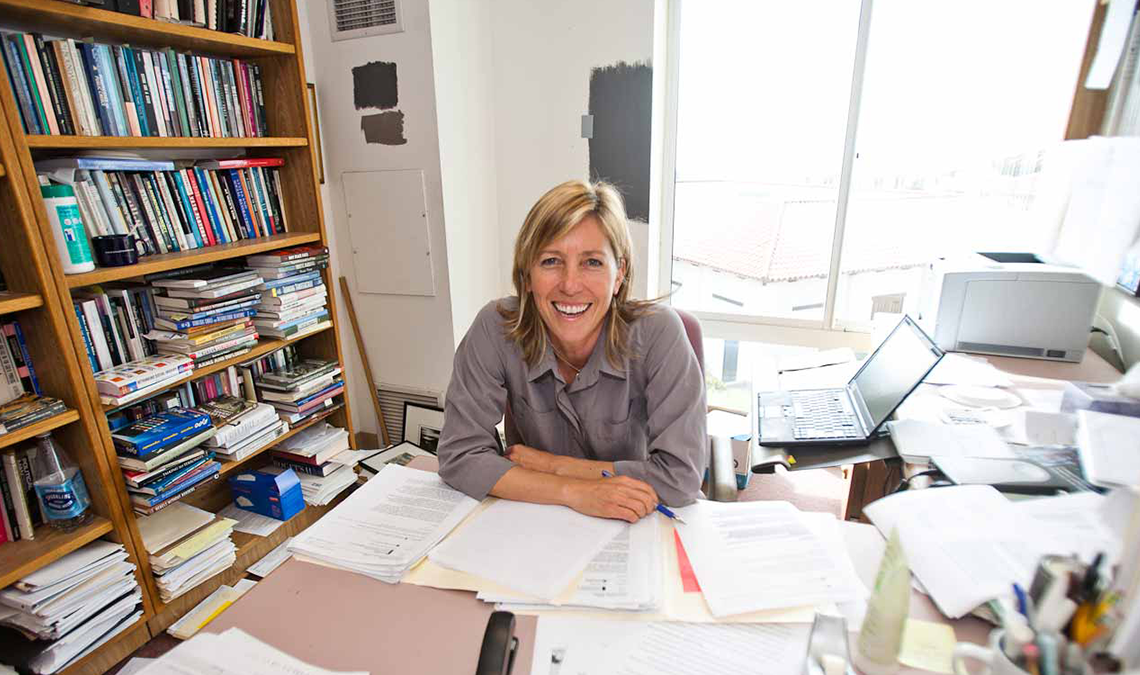 For quickly explaining complex world events, blogs can beat news articles and academic papers. That is Barbara Walter’s belief and why the political science professor at the School of International Relations and Pacific Studies (IR/PS) launched Political Violence @ a Glance, a blog designed to consistently produce expert analysis of problems related to violence and protest in the world’s conflict zones.

Founded by Walter and Erica Chenoweth of the University of Denver in 2012, the blog has been honored by the Online Achievement in International Studies Awards (also known as “the Duckies”) several times in categories such as Best Blog and Best Blog Post.

For Walter, an authority on civil wars, Political Violence @ a Glance offers her and its other contributors the opportunity to apply sophisticated academic research and statistical studies to current foreign policy problems in an accessible, engaging way.

“Policymakers and the public often need answers to problems in a short period of time, and most academics are not trained or incentivized to respond quickly to the demand,” Walter said.

Political Violence @ a Glance entries have considered such timely questions as: Why did violence break out in Syria but not Bahrain? Why did Qaddafi not go into exile? And, should the United States intervene in Syria or stay out?

Walter’s work to address these issues goes beyond the blogging world and classroom. Her expertise has been sought after by the U.S. State Department, as well as the Central Intelligence Agency, Defense Intelligence Agency and numerous foreign governments. She most recently briefed State Department officials on the Syrian Civil War and provided insight as to how she expects that conflict to end.

Her current research and teaching interests include the organization and behavior of rebel groups during civil war, as well as the rise of Islamic extremism.

Some of her notable blog entries on these subjects include a posting in September 2014, titled “Why ISIS Wants Its Brutality to Be Public.” In the piece, Walter explains how ISIS has captured the world’s attention, in part, because it has publicized, through videos, photos and social media, its public executions, lashings and beheadings. According to Walter, this is a strategy ISIS has used to gain control over territory (especially Shiite occupied territory). “ISIS needs to convince the local population not to fight back,” she writes. “To do this, they must first convince them that (a) any resistance will be punished harshly, and (b) the government is too weak to help them.”

In addition to Political Violence @ a Glance, Walter has contributed to The Monkey Cage blog, which is hosted on the Washington Post website and also focuses on current events, political science and international relations.

Her most recent contribution to the Monkey Cage, Why extremism thrives in the Middle East today, sheds light on how and why radical Islamist groups have flourished in the civil wars in Syria, Iraq, Afghanistan, Libya and Yemen. Walter also offers advice on how the U.S. and others states can help reverse this trend: By providing “evidence to local populations that radical groups will not rule as fairly and honestly as they claim they will” and by “enhancing the credibility” of moderate groups.

Walter, who joined the IR/PS faculty in 1996, is the recipient of numerous grants and fellowships, including awards from the National Science Foundation, the Carnegie Corporation of New York, and the Guggenheim and Smith Richardson Foundations. She also is a member of the Council on Foreign Relations.

She says Political Violence @ a Glance is a way to help link the research she does at UC San Diego with real-world events outside the university.

“Policymakers understand the value of data and the ways in which evidence-based research could help them,” Walter said. “The problem is that much of the best quantitative research is highly technical and not particularly easily processed.[Thus,] there’s enormous value to be gained, if this work is made more accessible and directly applied to current problems…This is where Political Violence @ a Glance comes in and this is why I think it’s so valuable.”

Walter points out that another way the blog is unique is that it was founded and continues to be managed by women.

By Virginia Watson
6 Mins read
From panelists to negotiators and attendees, GPS had boots on the ground at the major international climate event and presented new research on practical climate and trade policies and practices
Community

By Virginia Watson
7 Mins read
From classic memoirs like “Kitchen Confidential” to a Pulitzer Prize-winning novel about trees and an updated spin on tales from King Arthur’s court, GPS professors share the books they can’t put down
FacultyResearch