A match made in GPS 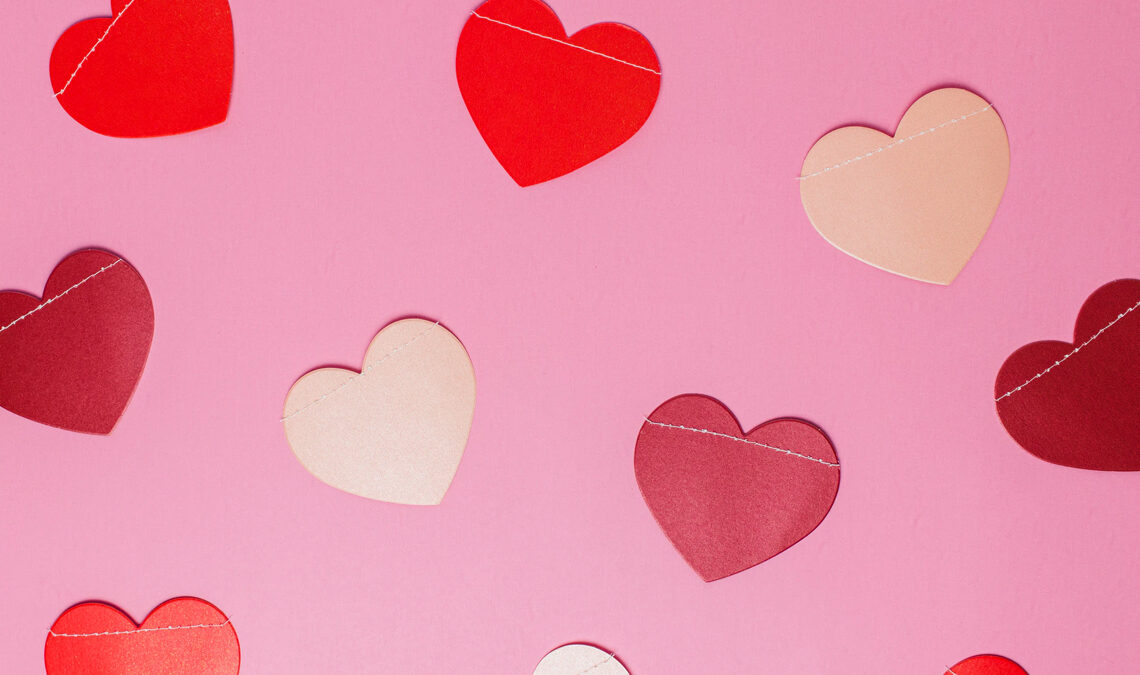 In time for Valentine’s Day, meet a few GPS alumni who found love in the long term before, during or after attending the School

Students come to the School of Global Policy and Strategy (GPS) with expectations of sculpting a comprehensive worldview and graduating with a honed understanding of how public policy, management and international interactions shape strategic decision-making.

But occasionally, they luck out with more than what their tuition paid for … they find their soul mate. In time for Valentine’s Day, we connected with a few of the School’s alumni couples willing to share their love stories. 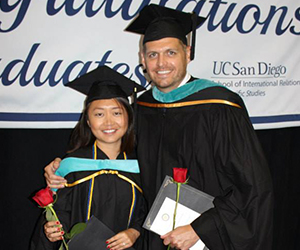 She works as … a quantitative analyst and statistical modeler for data science and analytics at Gannett Co. Inc. in Washington, D.C.

He works as … an international trade specialist in the Office of Trade Agreements Negotiations & Compliance at the International Trade Administration (ITA) in Washington, D.C.

In his first week at GPS, Steve made a point to shake every classmate’s hand in an effort to expand his social circle—every classmate except Yihua, that is. She arrived late due to travel complications.

Needless to say, they’ve now made up for lost time and then some.

By fall quarter, after their first few encounters during summer prep and officially hitting things off at a Summer Celebration event, they spent most of their time studying together in the library.

“I can’t imagine trying to date someone who was not also a graduate student during GPS,” Steve shared. “We helped each other out a lot. Yihua helped me with Quantitative Methods and Chinese while I helped her understand American culture.”

Still today, he says it’s beneficial to have by his side “a confidante that graduated top of her class,” especially one who shares an interest in China and international trade policy.

Yihua added, “We both would not have had nearly as much fun or worked nearly as hard in graduate school (without one another).”

They married June 21, 2014, just before relocating to Washington, D.C., where Yihua began her career as a senior quantitative associate at Hanover Research and Steve served as a Hauser Presidential Management Fellow, with the rare opportunity of working in five offices of the ITA in a year and a half.

Even from across the country, their connections to GPS remain strong.

“GPS graduates are like a family,” Yihua said. “We are like-minded people trying to make the world a better place.” 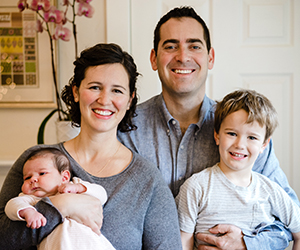 She works as … political scientist at Lawrence Livermore National Laboratory in Livermore, Calif.

He works as … political scientist at Lawrence Livermore National Laboratory in Livermore, Calif.

Their family … comprises two children, Brock (3) and Adair (3 months), and their dog, Huxley

For more than 10 years Ashley and Ben have been each other’s biggest competitors and supporters.

While at GPS—since their first meeting outside of the Gardner Room during summer prep—they were being graded on a curve. Now they work not only in the same field but also the same organization.

“This lesson has been important for us in the long term: Your relationships with your classmates are more important than your grades,” Ashley said. “Be a team player. Competition is an easy thing to fall into.”

To that end, having one another on their “teams” and a classmate on their respective hip has worked out quite well for the couple.

“We have roughly doubled our knowledge of how policymaking works in practice,” Ashley said. “Ben has learned a lot about nonproliferation by osmosis, and I have learned more than I ever wanted to about ISIS and counterterrorism. We also know each other’s strong suits and weaknesses sometimes better than we know our own.”

Ashley noted still today she leverages the School’s focus on the Pacific to build her foundation of knowledge about Asian security issues, and Ben still uses quantitative methods—he was, after all, a teaching assistant for Quantitative Methods III, including to Ashley.

But she doesn’t give him too much credit for her academic performance.

“Ben’s grades would have suffered had we not been dating,” Ashley teased. “I suspect he would have spent more time at the Casbah and Turf Supper Club.” 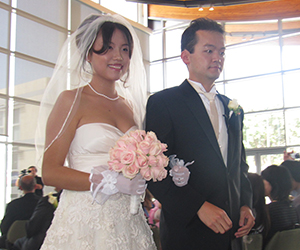 She works as … senior financial analyst at Beckman Coulter in Tokyo

He works as … senior associate at Boston Consulting Group in Tokyo

Their family is … growing

Kun and Keisuke exchanged more than a handshake with the dean over their graduation weekend. They also exchanged vows.

Just a stone throw away from the GPS library where they met, Kun and Keisuke were married in the Great Hall June 12, 2010, a day before receiving their MPIAs.

“We wanted to do the process in front of our friends and classmates,” Kun said. “Professor Gordon Hanson helped coordinate the whole process.”

Today, the couple credits useful advice given to any graduate student—“find a partner, and work together”—as what led them to cross paths in the library roughly eight years ago.

What brought them to the School in the first place, however, was varied.

Keisuke was working as a public officer prior to GPS and was allured to the School for its “basic toolkit for quantitative analysis,” which he now uses in the vein of pursuing a consulting career with BCG.

On the other hand, Kun, originally from China, had done a stint at San Diego State University toward her bachelor’s in journalism with a focus on economics.

“At that time, I felt San Diego was a great place,” she recalled. “I applied to the graduate school, with a focus on international economics.”

While they have yet to return since graduation, Keisuke said it’s a trip he hopes to make one day with their children to show them their alma matter.

Which means travel planning is on the horizon—in August, Keisuke and Kun will become a family of three. 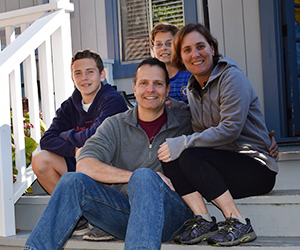 She works as … director of development and corporate marketing for the Center for Sustainable Energy (CSE) in Oakland, Calif.

He works as … program manager at ViewPoint Therapeutics in San Francisco

The proposal happened … at a La Jolla Shores apartment in 1999

It wasn’t quite love at first sight for Heather and Michael.

In fact, their first meeting still is hazy, but agreed by both to be most likely in the GPS courtyard.

“We were friends first, and that was a great foundation for our marriage,” Heather said, adding they even played intramural tennis together before beginning dating after Michael earned his MPIA.

The couple stayed close to the School after graduation, too, including serving back-to-back terms as president of the alumni board—Michael from 1996-1998 and Heather from 1998-2000. Michael also served on the UC San Diego Alumni Association, acting as a liaison to GPS.

Since venturing to Northern California, Michael and Heather make a point whenever possible to reach out to recent GPS graduates and meet up with current students traveling to the area.

“We enjoy the camaraderie from shared GPS experiences,” Michael said. “In the five years Heather has been with CSE there have been anywhere from five to 10 other alumni at the organization. Our problem-solving, macro approach and collaborative style stand out.” 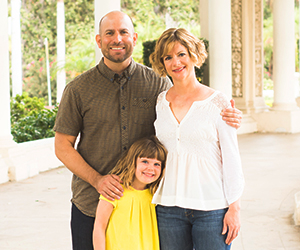 She works as … senior manager of Americas customs at Cisco Systems Inc. in San Diego

Their family … includes their daughter, McGinnis and puppy, Pippy

For Carolyn and Will, the sparks were flying well before enrolling in GPS.

They met as undergraduate students—Will at University of Virginia and Carolyn at UC Santa Barbara—en route to a summer study abroad program in Japan in 1994.

“We met at the Narita airport train station (Tokyo Narita Airport) while waiting for our guide to arrive,” Carolyn recalls. “We shook hands over a pile of luggage.”

As Will tells it, afterward he sat strategically next to Carolyn on the train ride to Hamamatsu, over which “hours of witty banter ensued,” including their shared interest in Japan.

The couple later returned to the country to work for three years as teachers with the Japan Exchange and Teaching program, based in Iizuka, Fukuoka Prefecture.

“We expected the return to the States would be challenging and thought it best to attend graduate school to sharpen our skills and build our networks,” Will said. “Ultimately, we both were accepted to GPS and decided to move to San Diego.”

“The decision to attend GPS was great for both of us,” Will said. “We both regularly draw upon strategy, finance and business analytics skills.”

And though their careers have grown and varied since their meeting 20-some years ago at the train station, their banter remains the same.

“I probably would not have gone to GPS if Carolyn were not in the picture,” Will said. “Carolyn would probably have gone to GPS, met some fabulous guy and now be the dean. Fortunately for Dean Peter Cowhey that alternate universe didn’t happen, so his job is safe. You’re welcome, Dean Cowhey.”

By Virginia Watson
6 Mins read
GPS prepares students for a wide range of careers in Korea, one of the choices as a regional focus found in many of the school’s degree programs
AlumniFacultyResearchStudents