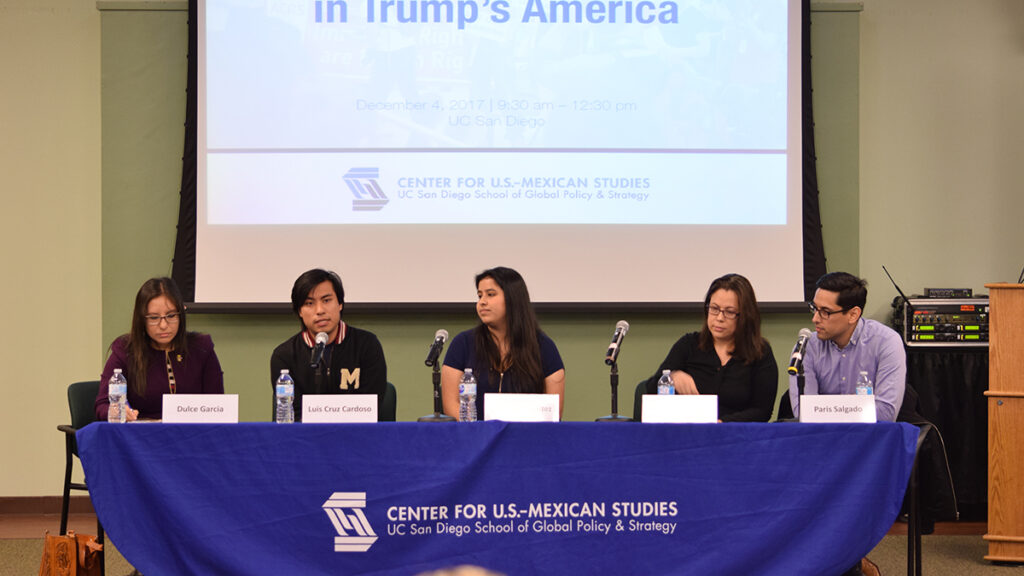 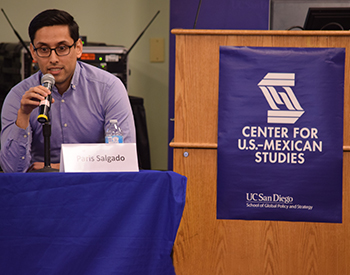 Six years old. The age at which most Dreamers come to the U.S. From kindergarten onwards, this is their home. With eight out of 10 Dreamers having a U.S. sibling, spouse or child, they have deep roots in America. American, all but for a piece of paper.

Now imagine putting all of your dreams and plans on hold because of politics. Currently 800,000 people still have Deferred Action for Childhood Arrivals (DACA) status and over 91 percent of DACA recipients are currently employed. Yet their ability to plan for the future is in jeopardy, with young people counting down the days they will have protection and hoping for Congress to provide a permanent solution.

A critical half-day event hosted on Dec. 4 by the Center for U.S.-Mexican Studies (USMEX) at the School of Global Policy and Strategy (GPS) titled “Challenges for Dreamers in Trump’s America” brought together a group of speakers who offered compelling facts, powerful stories and nuanced policy options.

“We know that DACA and Dreamers are a key issue on the U.S.-Mexico agenda,” said Rafael Fernández de Castro, professor and director of USMEX. “This is the type of work we do at the center with world-renown journalists and scholars.” 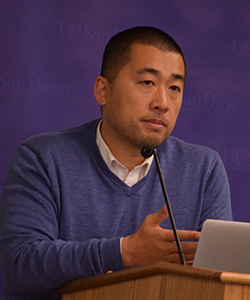 We first heard from UC San Diego Assistant Professor of Political Science Tom Wong, who just released the 2017 National DACA Survey on behalf of the Center for American Progress, an independent nonpartisan policy institute. The study looked at DACA’s impact on the U.S. economy, as well as employment, earnings and education levels of Dreamers.

“This is a politically manufactured moment and a lot of this is by design,” said Wong. “When we think about the work to be done, we need to not only add up the dollars, but also uplift the stories.”

Wong went on to add that we are losing the American dream. It becomes dimmer when we say to a group that their sense of security and status is no longer guaranteed.

In his informative presentation, we looked at DACA’s misconceptions, including the assumption that recipients are employed in low-wage, low-skilled jobs. The study showed that not only are 72 percent of recipients employed at Fortune 500 companies, over 5 percent of DACA recipients have started their own business, showcasing the empowerment DACA has provided.

In the DACA debate over wages, recipients have been shown to assist in filling labor market shortages in important fields like healthcare. In total, DACA recipients will contribute $460.3 billion to the U.S. gross domestic product over the next decade. Pulling Dreamers out of the labor market would lead to billions of dollars in turnover costs.

“DACA is not taking jobs away, they are filling the gaps,” said Wong. “I want to hire the best people.

The Dreamer panel was composed of students and alumni, including UC San Diego and UC Irvine students and San Diego Attorney and UC San Diego Alumna Dulce Garcia. They shared heartfelt stories of hopelessness and fear, as well as the ways in which the challenges Dreamers face have inspired them to advocate for change.

As an immigration and civil rights attorney, Garcia works closely with San Diego Border Dreamers, an organization established to promote and advance the 2017 Dream Act. She stressed the importance of universities and employers to be a voice for those directly affected. With 11 million people undocumented, it is about capturing those that aren’t speaking out.

“We must look beyond the Dreamer narrative to the voices that aren’t being heard – those that did not make it to college, the ones that had to drop out of high school, the Black and Asian undocumented students whose stories often become invisible,” one student said.

For the current undergraduates, life has not been easy, especially as first-generation students with little to no support from family. From feelings of hopelessness and helplessness, current students explained how the power of community at UC San Diego is helping to get them through this difficult time – from counselors to building trust with professors. 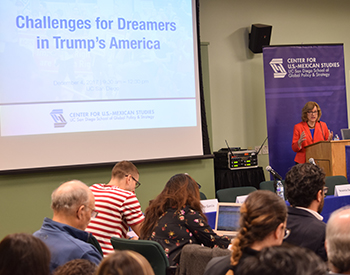 “I went 19 years of my life without meeting another person who was undocumented,” one student said. “You live your life under the radar, in a constant state of imposter syndrome. There were many days when I couldn’t get out of bed.”

The final talk of the day was an inspirational discussion with Julia Preston, contributing writer for The Marshall Project and former national immigration correspondent for The New York Times. She stressed the power of youth and the use of social media in the movement to protect Dreamers from deportation.

“Learning to tell your story is the first thing you learn in activist training,” said Preston. “Messages are going up, voices are being heard. This is not a time for people to become demobilized.”

While Democrats have indicated they will not vote for any spending bills that do not include protections for Dreamers, Preston foresees a short-term patch to the problem. For future success, she stressed a balance of political negotiation while sustaining cohesion and focus. She added that there are Dreamers everywhere. None of this action is spontaneous. Yet we are experiencing an inversion of the American dream.

If DACA ends, the country must ask what we stand to lose, both economically and regarding the future of education. Among the Dreamers currently enrolled in school, 72 percent are pursuing a bachelor’s degree or higher. The power and potential lie in our organized youth movement, one of resilience and strength.

“Little ripples make waves,” one student said. “Be the voice for those that don’t have the opportunity to speak out. When you hear our stories, share them.”

View photos from the Dec. 4 event.