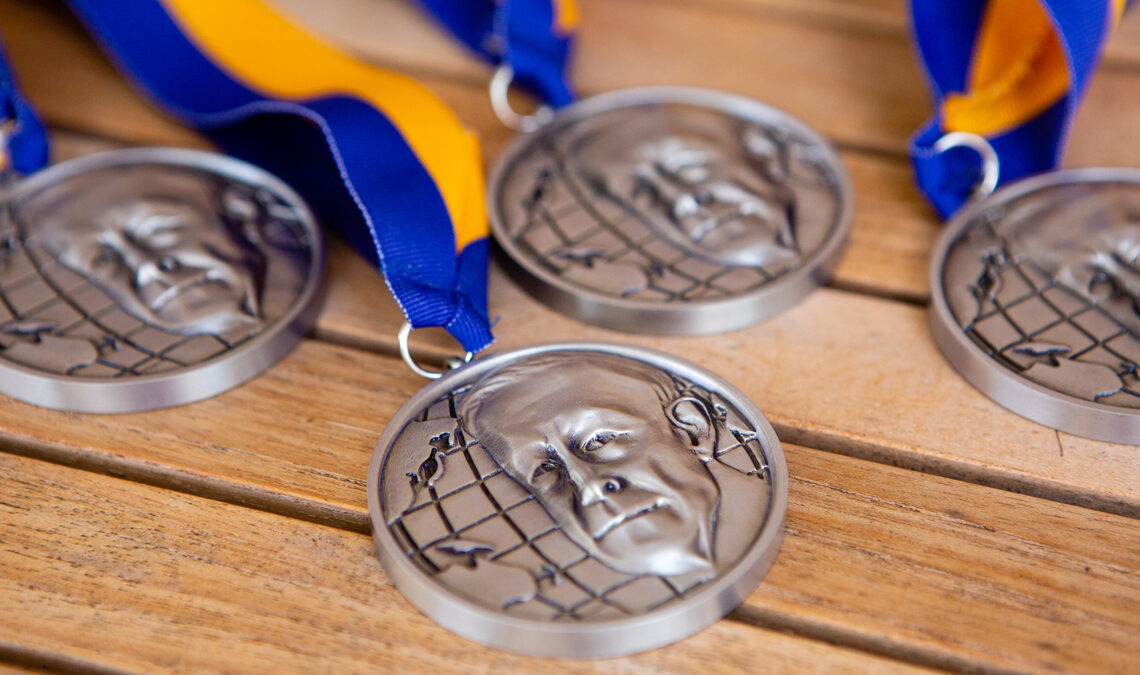 The University of California San Diego today announced the 2021 recipients of the esteemed Chancellor’s Medal and Revelle Medal.

Awardees of the Chancellor’s Medal, one of the highest honors given by UC San Diego to recognize exceptional service in support of the campus’s mission, include: Phyllis and Dan Epstein, Hanna and Mark Gleiberman, Gaby and Richard Sulpizio, and Patricia and Christopher Weil. The Revelle Medal recognizes current and former faculty members for sustained, distinguished and extraordinary service to UC San Diego. The 2021 Revelle Medalists are: Richard “Dick” Attiyeh, Wayne A. Cornelius, Peter F. Cowhey, Barbara A. Parker and Robert Sullivan.

Chancellor Pradeep K. Khosla will bestow the Revelle Medals upon the honorees during UC San Diego’s Nov. 18-19 Founders Celebration, an annual celebration of the university’s founding and those who have helped make the campus one of the world’s leading universities. Chancellor’s Medalists will be celebrated at a separate event in 2022.

“Our 2021 honorees have contributed meaningfully to help develop the prestige and distinction of this unique university,” said Chancellor Khosla. “Thanks to their efforts, UC San Diego continues to be a leading hub for education, research and service in a rich variety of fields from health care to humanities and global policy to business management. Over the years, our honorees have demonstrated extraordinary commitment to the success of our many innovative programs and initiatives.”

Since its establishment in 2000, the Chancellor’s Medal has been awarded annually to select community leaders and philanthropists whose longstanding contributions and involvement have supported promising students, furthered meaningful research and helped the campus and local region grow and prosper. The 2021 Chancellor’s Medal honorees include:

Phyllis and Dan Epstein have dedicated over 25 years of tireless service to UC San Diego as volunteers and campus advocates. Their recent $10 million commitment to name the new state-of-the-art Epstein Family Amphitheater demonstrates their commitment to enriching the arts experience for students and the broader San Diego community. The couple’s decades-long legacy of transformational leadership spans the breadth of the university, from health care, to research, to the arts. They currently serve as trustees of the UC San Diego Foundation and as members of the Chancellor’s Executive Advisory Cabinet for the Campaign for UC San Diego. Dan Epstein also serves on the Rady School Dean’s Advisory Council and the UC San Diego Health Board of Advisors, while Phyllis is a member of the Arts and Humanities Dean’s Advisory Council, the School of Global Policy and Strategy International Advisory Board, and chair of the UC San Diego Foundation Donor Relations and Stewardship Committee.

Hanna and Mark Gleiberman are passionate leaders and visionaries—changemakers who embody UC San Diego’s mission to make a difference in our world. Their recent $12 million commitment to name the Hanna and Mark Gleiberman Head and Neck Cancer Center at Moores Cancer Center encompasses clinical trials, fellowships, faculty support, research grants, patient experience and expenses, and helps provide services not covered by health insurance for those who cannot afford them. In addition to their support across UC San Diego—including the Triton Food Pantry, Triton Athletics, UC San Diego Hillel, and the Pediatric Diabetes Research Center, as well as an innovative class on homelessness that is serving as a model for similar programs across the country—the Gleibermans are leaders on campus and across the community. Their $1 million gift to the Lawrence Family Jewish Community Center supported the development of San Diego’s first fully accessible playground. Mark Gleiberman serves on the UC San Diego Foundation Board of Trustees, Real Estate and Development Advisory Board of Directors, and was formerly on the UC San Diego Athletic Board. Hanna Gleiberman serves as a trustee of the La Jolla Playhouse.

For 25 years, Patricia and Christopher Weil have been advocates for UC San Diego, supporting community partnerships, arts and humanities, and education and scholarships. They were among The Preuss School UC San Diego’s earliest supporters, and their family foundation has supported hundreds of four-year college scholarships to Preuss graduates and graduates of other low-income high schools. For many years, Pat Weil was an active member of the Preuss Board, and she continues to serve as a member of its Academic Advisory Committee. Both the Weils serve on the Division of Arts and Humanities Dean’s Advisory Council and are pleased to have been able to contribute to the increasing prominence of the division. They also are active as ArtPower Power Players, and Chris Weil has served on the UC San Diego Foundation Board of Trustees—and is now a lifetime trustee emeritus. The Weils are or have been active in other community organizations, with Pat being involved with the San Diego Repertory Theater and Old Globe Theater, and Chris with San Diego Mainly Mozart, San Diego Grantmakers, and the Jacobs Family Foundation/Jacobs Center for Community Innovation. Both Pat and Chris Weil serve on the board of their family foundation along with their three children.

Created in honor of Roger Revelle, who helped establish UC San Diego during his tenure from 1950-1964 as director of Scripps Institution of Oceanography, the Revelle Medal honors the contributions of current and former faculty members to UC San Diego. The 2021 recipients are noted below:

Dick Attiyeh’s service to the university began when he first joined the fledgling Department of Economics as a faculty member in 1967, helping to build the department into the powerhouse it is today. Since then, his service has extended for more than five decades, most notably as vice chancellor for Research and dean of Graduate Studies from the 1980s to the mid-2000’s. During his administrative tenure, a remarkable 23 new graduate programs were established across the campus and he was instrumental in the establishment of several professional schools. A champion of graduate students, Attiyeh also served on UC-wide committees that led to major improvements in how students were funded. Following retirement in 2006, he has continued to serve as a leader in emeriti associations, both on campus and system-wide. Attiyeh focused his own research work in macroeconomics and the economics of education, demonstrating the efficacy of self-paced learning when it’s properly designed.

A world-renowned expert on immigration policy and Mexican studies, Wayne A. Cornelius was the founding director of two internationally respected, interdisciplinary research centers: the Center for U.S.-Mexican Studies and the Center for Comparative Immigration Studies, which helped to put UC San Diego on the global map in both fields. He authored, co-authored or edited over 300 publications and is a frequent contributor to national and international news media. He advised presidential candidates Pete Buttigieg and Joe Biden on immigration issues. Cornelius did field research with his students annually from 1976 through 2015 and served as founding director of UC San Diego’s nationally recognized Mexican Migration Field Research and Training Program. In 2012, Mexican President Felipe Calderón awarded him the Order of the Aztec Eagle, Mexico’s highest decoration for foreign citizens. He also received the Latin American Studies Association’s Kalman Silvert Award for Lifetime Achievement, and the University of California’s systemwide Constantine Panunzio Award for distinguished post-retirement service.

An expert on the future of communications and information technology markets and policy, Peter Cowhey joined the faculty of UC San Diego in 1976 and went on to serve as dean of the School of Global Policy and Strategy (GPS) for nearly two decades. Under his tenure, the school has expanded its influence to become one of the top professional schools of international relations and public policy and shapes cutting-edge solutions for a transforming world. Beyond the classroom, for the last five decades he has held multiple UC San Diego senior leadership positions including interim executive vice chancellor for Academic Affairs and director of the UC Institute on Global Conflict and Cooperation. Cowhey also has worked for two White House administrations where he helped shape the country’s international telecommunications and technology landscape, and has held many leadership positions in the nonprofit world including the Aspen Institute, California Council on Science and Technology, Grameen Foundation USA, La Jolla Playhouse and more.

Nationally recognized for extraordinary compassion, Barbara A. Parker, MD, is a board-certified medical oncologist at UC San Diego Health and professor emerita in the Department of Medicine at UC San Diego School of Medicine. Starting her career as a resident and fellow at UC San Diego, she went on to serve as medical director of oncology services and senior deputy director of Cancer Medicine at Moores Cancer Center, the region’s only National Cancer Institute-designated Comprehensive Cancer Center. Parker’s research interests are in personalized and targeted therapies for breast tumors. She has received multiple honors, including a Lifetime Achievement Award from the American Cancer Society. Parker’s legacy is marked by her mentorship and collaboration with countless colleagues across UC San Diego Health, and by the gratitude of the more than 20,000 patients she has cared for.

As the founding dean of the Rady School of Management, Robert Sullivan’s leadership, passion and vision were instrumental in building the school’s philanthropic foundation and its reputation for excellence, innovation and economic impact. During his time as dean, he led the recruitment of world-class faculty who were consistently recognized for being among the best in the world as scholars and as educators. Upon arrival to UC San Diego, he quickly launched innovation-centric MBA programs for full-time students and working professionals as well as one-year specialized masters programs in the areas of finance, business analytics and accounting. Under his leadership, the school grew to nearly 40 ladder track faculty and nearly 750 masters students in residence. Since the school’s founding, Rady School students and alumni have raised more than $2 billion in capital and started more than 180 operational companies, including six companies which have completed initial public offerings (IPOs). Sullivan also secured nearly a quarter of a billion dollars of philanthropic investments for the school.