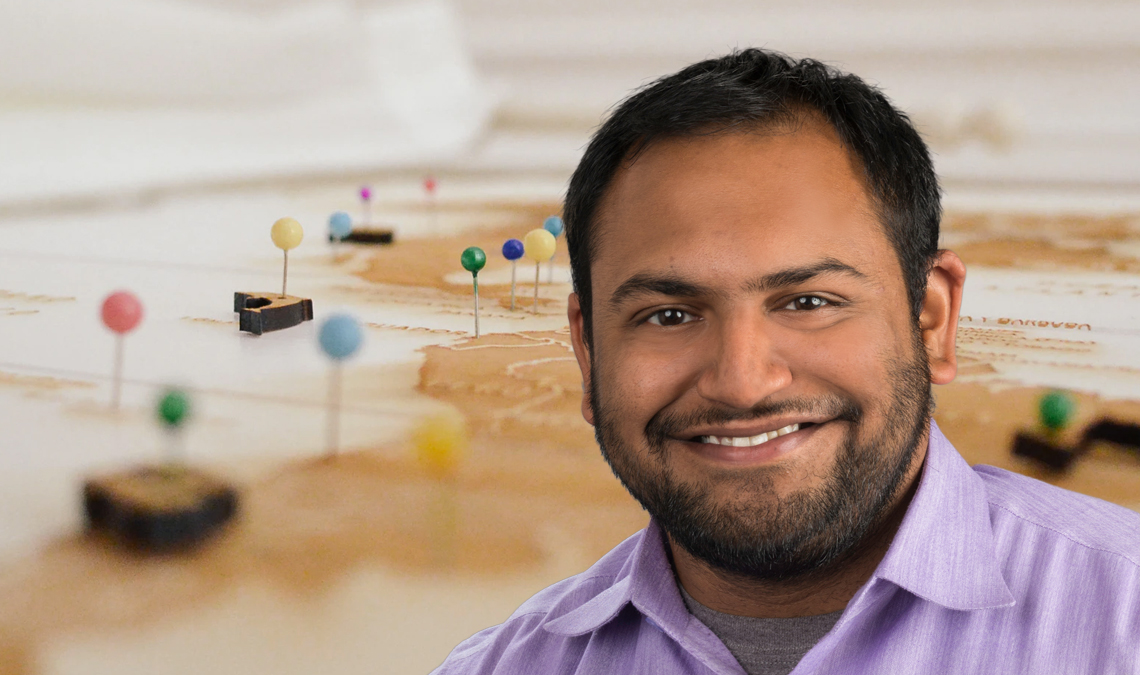 Consider for a moment this scenario: you are a laborer in rural Indonesia, working outdoors. In one work area, large trees provide shade and cooling. In another work area close by, all of the trees have been cut down, leaving you without any natural protection from the elements. Which would be the better area to work in?

Researchers, like GPS assistant professor Teevrat Garg, produce more evidence every day that climate change is not only an environmental concern – it is also a social and economic one, with direct effects on human health and productivity.

Garg has recently released a number of new findings showing the effects of environmental hazards on measures of human capital.

Garg recently concluded a three-year project with colleagues at the Nature Conservancy, which examined the local ecosystem services provided by forest cover. Garg and his co-authors determined that forests play an essential role in providing natural cooling to an area.

“These are forms of nature-based adaptation, which are often the only way rural outdoor workers can protect themselves from rising temperatures,” Garg said.

“We also found that raising incentives doesn’t change worker effort under higher temperatures, indicating that heat represents a binding constraint on productivity,” Garg said. “In our companion piece in Environmental Research Letters, we also show that in addition to these productivity effects, workers also experienced declines in cognitive performance.”

Since beginning at GPS in 2016, Garg said he has greatly expanded the scope of his research.

“My initial work documented that damages from climate change and other environmental disasters differed greatly across and within countries,” Garg said. “Since then, my research portfolio has expanded to consider why these differences exist.”

Garg has studied the relationship between environmental changes and disparities in social protection, income and political factors.

“Does political alignment shape post-disaster recovery? Does having leaders with pro-environmental political preferences better prepare places against natural disasters?” Garg asked. “These questions are increasingly important to answer as the incidence of natural disasters increases and the damages from disasters perpetuate greater inequality.”

Garg has also focused on examining the environmental impacts of policies designed to improve agricultural productivity and reduce barriers to mobility of workers outside the agricultural sector.

Garg highlighted a program in Uganda that aimed at improving agricultural productivity and had the twin benefit of reducing deforestation by lowering demand for clearing new land for shifting agriculture.

“Conversely, in India we found that when transportation costs were lowered for villagers to instead work in non-agricultural sectors in nearby towns, farmers switched away from using labor to clear crop residue and instead increased the use of agricultural fires,” Garg said.

Garg noted that mitigating climate change is an international priority – and that an excellent blueprint for the U.S. has been put forward by David Victor, Gordon McCord and other colleagues, as shown through the Zero Carbon Action Plan.

“It’s also been really promising to see countries like India and China expanding their efforts to mitigate climate change,” Garg said. “India recently adopted a national target for solar energy. In fact, we are starting to do work in India to study how we can reduce the carbon footprint of the residential electricity sector by increasing adoption of rooftop solar panels in urban areas.”

Garg said it is important to keep in mind, however, that in addition to climate change mitigation, people need to have plans in place for adaptation, as some of the effects of climate change will continue to manifest in the next several years.

“Many of these effects will be unequal and disproportionately affect poor people in poor countries,” Garg said. “We find that as the effects of climate change manifest, one way that the poor cope is by increasingly relying on social protection programs.”

Finding ways to help economic development succeed, thanks to actively participating in sustainable practices, is at the heart of Garg’s research and teaching; in the fall, along with teaching Quantitative Methods I and International Health Economics, he will be introducing a course on environmental justice, where students will examine inequities in environmental quality across demographics. The course will help to show students how environmental quality is essential to human livelihoods and health, he said.

Garg cited a paper he and co-author Ajay Shenoy of UC Santa Cruz recently had published in the American Journal of Agricultural Economics, which found that India’s signature place-based economic policy, which encouraged rapid development of industries in the state of Uttarakhand, achieved 300% economic growth while having minimal effect on local forest cover.

“Once we start to account for the economic cost of poor environmental quality and recognize that economic policies can be designed with minimal carbon footprint, the possibilities for sustainable development are fascinating,” Garg said.

By Christine Clark
15 Mins read
Students and faculty from Scripps Institution of Oceanography and School of Global Policy and Strategy prepare to attend COP27 in Sharm El-Sheikh, Egypt
×
Events