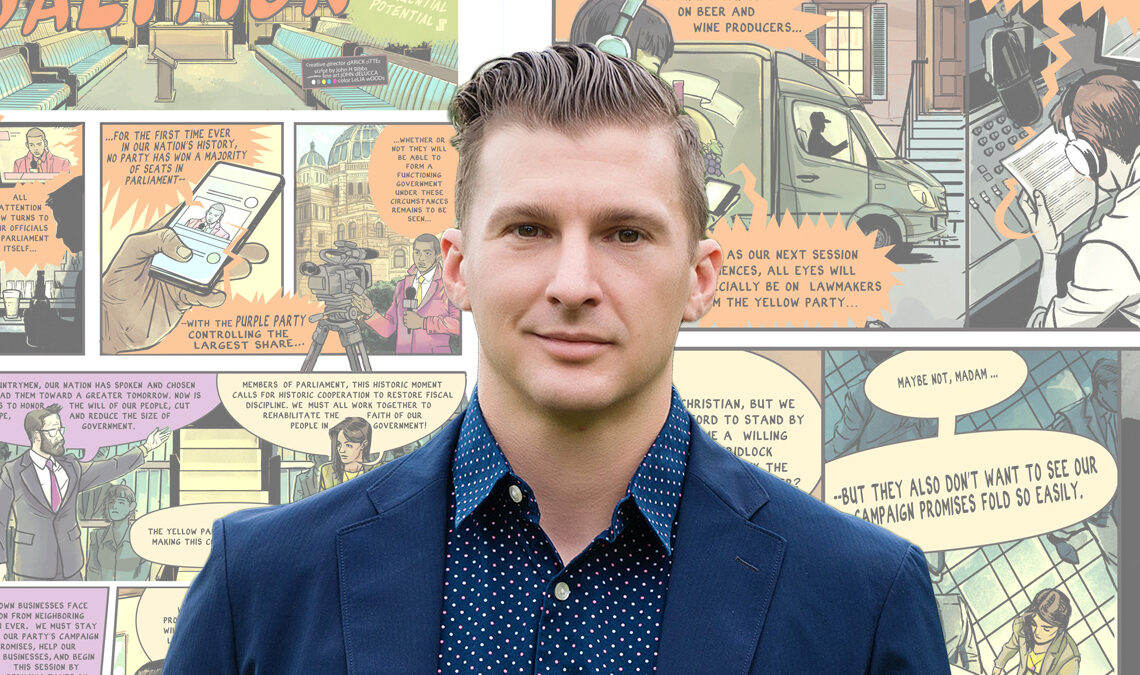 David Fortunato, associate professor at the UC San Diego School of Global Policy and Strategy (GPS), was traveling with Rice University professor Randy Stevenson to attend a conference. It was there the two had what Fortunato called a “pleasant disagreement” about the potential outcome of the 2009 elections in Germany.

“My position was that the Social Democratic Party, which had been in coalition with [German chancellor] Angela Merkel’s Christian Democratic Union (CDU) for four years, would get slaughtered because they had failed to differentiate themselves during that time,” Fortunato said. “This would make it difficult for voters to credit them for good outcomes or even really understand how their policy positions were different from the CDU’s.”

Stevenson’s opinion differed, and the disagreement developed into an article they co-authored. Fortunato continued that line of research in his dissertation, and the research has culminated in his newest book, “The Cycle of Coalition: How Parties and Voters Interact Under Coalition Governance.”

“The basic question is: how can parties cooperate in a coalition government, while simultaneously doing what’s necessary, individually, to compete for votes?” Fortunato said.

In this Q&A, GPS News delves into the book’s findings, the cover art and what’s next for Fortunato’s research.

The cover art is great. How were you involved in the development of that?

The cover and comic were the most fun part of this project. My friend Darick Ritter is an artist and produced the cover and summary comic for our mutual friend Jessica Trounstine’s amazing book (Segregation by Design), and I just fell in love with it. So when the book was contracted, the first thing I did was holler at Darick to get the ball rolling on the cover art. It was a fun, iterative process where I explained the book’s central argument and what I wanted the cover to convey, and Darick mocked up several candidate approaches and helped fine-tune what the art should and should not be used for. We eventually settled on the final version, which is kind of an inverted Spy vs. Spy setup, where the combatants want to show conflict externally while internally maintaining their cooperative relationship, and I love it.

There is a little summary of the process available online. Darick, his team at Sequential Potential and I also teamed up to produce a teaser comic that gives the gist of the argument. You can check that out here.

What are the implications for the findings in this book?

The main thread is that there is more to coalition governance than the birth and death of governments, and responsiveness to voters can take many different forms, nearly all of which have been ignored by political economists. Almost no voter likes compromise, but the need for compromise is just built into most political systems, so parties have to deliver on other types of goods to keep their voters happy and that can lead to some pretty unpleasant outcomes. They waste time and resources squabbling to keep their supporters entertained and the government works less efficiently than we would like as a result.

Who is ultimately harmed by the “cycle of coalition” discussed in the book?

You may read the book and come away with the idea that it’s us, voters, who are injured, because the government works less efficiently. But that’s not entirely correct, because it is also us, voters, who are driving that train. Parties are picking these fights with one another because we want them to – these squabbles make us happy by making us feel heard and represented by the parties we support. Maybe we are harmed, but we are also inflicting the harm upon ourselves.

The book focuses on parliamentary democracies in Europe and elsewhere. Are there any implications that can be taken from the study of these governments and applied to the U.S.?

Oh yeah. Coalition governance is roughly equivalent to divided government in the U.S. – both parties have to agree on any policy in order for it to become law. So, in 2019, we see remarkable consensus between Democrats and Republicans on little-covered tweaks to Medicaid, provision of lactation rooms in federal buildings, reforms to the VA to improve veteran suicide prevention, etc. – policy outcomes that almost everyone supports, but no one talks about. On issues that are very salient to the parties and their supporters, however, we get all-out war, even if there is not a lot of daylight between the parties’ positions on the matter. Just about everyone wanted the government to send more money to Americans in the fall of 2020, but the Republicans just could not stomach the idea of a public compromise with Democrats that close to the election, so no checks were mailed. Stalemate is a strategic choice made by electorally motivated parties in the U.S., just as it is in Europe.

Is it even possible to break the “cycle of coalition” at this point?

No. But I am not certain that necessarily has to be a bad thing.

Who is the audience for this book?

The book is targeted at readers wanting to learn how parties balance the competing interests of needing to cooperate with each other in order to govern efficiently on the one hand and needing to maintain a clear policy brand (and amuse their supporters) on the other. It is written to be accessible to most undergraduate students, and I’m hoping that it will be assigned in classes on European or parliamentary politics, as well as classes on parties and democratic responsiveness.

How long have you been working on this book?

Woof. This has been in progress since about 2010, but in fits and starts. I spent about a year working on two dissertation essays, that would become two articles, and then three chapters in this book. The remainder – the introductory chapters, a case study of the U.K.’s 2010-2015 coalition government led by David Cameron and Nick Clegg, the final empirical chapter which tests the argument at the macro level across a dozen or so countries, and concluding chapter – was written over a summer writing retreat in 2018. Since then, the book had to make its way through review, a revision in the summer of 2019, and then the seemingly interminable production process for its release this June. If one strips out the time split between this project and others, that active work probably represents about a year of my career.

When and where will the book be available for purchase?

The book is available for pre-order right now and will be officially released June 17 in the U.S. and U.K. Purchasing from Cambridge directly will be less expensive with code TCC2021.

What projects are you working on next?

Related to this project, Randy Stevenson and I are continuing a suite of projects on how voters understand coalition governance which will ultimately culminate in a book at some point. I am also putting the finishing touches on papers on government oversight and opioid mortality in the U.S. and how legislative oversight of police agencies affects their ability to conceal their behaviors from public records – police kill about three people a day in the U.S. but report less than one half of these incidents into the official record.

Finally, I have a series of papers on the gendered implications of trade policy, which I am very excited about. We have published one article on how women as consumers suffer from gendered tariffs, and the next papers are about how trade policy affects women in the labor force and how these inequitable outcomes may influence voters’ support for certain democratic institutions.

A Nation Dangerously Divided: Race Shapes Who Wins and Who Loses in U.S. Democracy