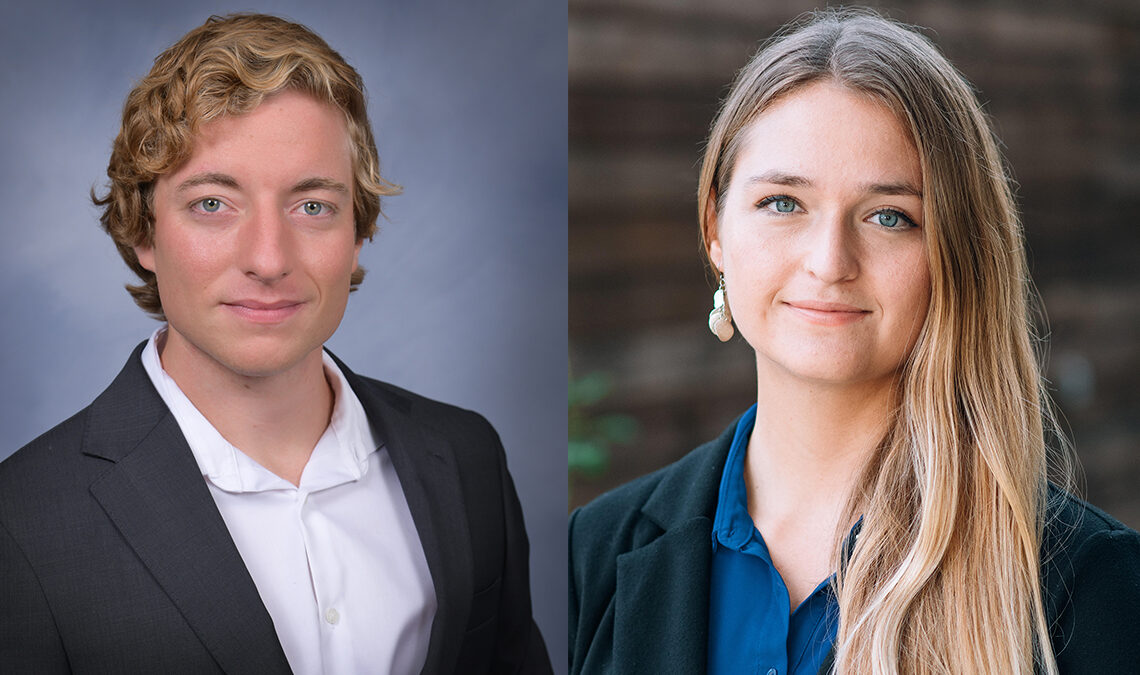 From making an impact on human rights for refugees to addressing sustainability worldwide, GPS students Brandon Callegari and Emily Collins share how the Sylff Fellowship is shaping their futures

Graduates of the UC San Diego School of Global Policy and Strategy (GPS) leave with a toolkit of skills for success, whether they pursue careers in the business world, in government or in nonprofit organizations. And one of the many programs that helps financially support the education of GPS’s outstanding students is the Ryoichi Sasakawa Young Leaders Fellowship Fund (Sylff) program.

The Sylff program was created at UC San Diego in 1991, thanks to a $1 million endowment for graduate students who show a high potential for global leadership, and helps to continue GPS’s tradition of recruiting top students from around the world. Two GPS students, Brandon Callegari and Emily Collins, discuss what it’s like to be the school’s Sylff Fellows and the opportunities the fellowship has created for them.

Brandon Callegari of Deltona, Florida, said he was searching for a Pacific-focused graduate school that would aid him in his goal of finding a career in the human rights field, and “GPS was the ideal choice,” Callegari said.

Callegari’s interest in human rights made him a natural fit for the Sylff program, whose mission is to transcend differences in nationality, language, ethnicity, religion and political systems to bring about social change in the global society and local communities.

“As somebody who wants to dedicate their life to addressing human rights issues for refugees and other displaced groups, I am driven to follow this mission and help to bring opportunities to people beyond social, cultural and physical boundaries,” Callegari said.

Thanks to the Sylff Fellowship, Callegari has the financial freedom to focus on courses at GPS that he finds meaningful.

“Being a Slyff Fellow has given me the ability to engage in my classes during my first year studies, without having to worry about any financial burdens that could affect my ability to concentrate on coursework,” he said. “But the most rewarding aspect is knowing that I am a part of a larger community of people who want to create a more inclusive and peaceful world for everyone, regardless of where in the world they came from or what their identity is.”

Callegari will graduate in 2023 and hopes to work for either a multilateral organization such as the United Nations High Commissioner for Human Rights or for a local nongovernmental organization (NGO), doing groundwork on specific human rights crises.

Before attending GPS, Callegari interned at nonprofit organizations focused on community development in Indonesia and North Korean human rights in Seoul. But during the summer of 2021, Callegari worked in construction to help save for graduate school.

“It showed me the meaning of hard work – there were many early mornings and long hours in the scorching sun, carrying heavy buckets of mud across job sites,” Callegari said. “It also made me realize that there are so many people in the world who have to do much harder things every day, without a choice, just to survive. I am driven now more than ever to help alleviate this burden on those people.”

Outside of his coursework, Callegari has also worked to get involved on campus, joining GPS’s Korea-focused organization Mannam and working as a surf instructor for UC San Diego Recreation, and he is embracing the number of amenities San Diego offers.

“I love the weather, the beaches, the food – Dave’s Hot Chicken is amazing – and, of course, the amazing people that I’ve met so far at GPS!” Callegari said.

Emily Collins studied international business as an undergraduate at UC San Diego. And as she neared graduation, she considered a number of graduate programs around the world to continue her studies.

“After just a short amount of time here, I fell in love with the area and decided to stick around,” Collins said. “I decided to study at GPS due to the incredible Sylff fellowship offer, the location and its renowned professors and Japan-oriented courses.”

Collins said being a Sylff Fellow is an incredible opportunity to focus on international affairs, Japanese studies and, in particular, Japan-Russia relations.

“As someone who has studied Japanese for over a decade and has worked at a Japanese company in Encinitas, this fellowship has allowed me to continue my Japanese studies while having the opportunity to work with professors who are highly experienced in terms of Japan, such as professor Ulrike Schaede,” Collins said. “I also am highly interested in environmental affairs and governance and am focusing much of my studies on sustainability in Japan and Russia.”

Collins acknowledged that without the Sylff Fellowship, she would not have had the opportunity to pursue the master’s program.

Collins will graduate in 2022 and is looking for opportunities to work in environmental and sustainability international organizations.

“I would like to use my knowledge of Japanese, Russian and French to improve international sustainability laws and programs, particularly in the world’s oceans,” Collins said. “I am also very interested in film and have a background in acting, so I would love to be able to produce documentaries or films that focus on global sustainability issues and bring light to what is happening around the world from a more global heuristic.”

As a second-year student, Collins said she has greatly enjoyed the flexibility of her courses this term.

“I have absolutely fallen in love with my courses this year, and, most importantly, they are teaching me to think about the world’s environmental problems in a new way,” she said. “While it can be challenging to entirely change one’s way of thinking and perceiving an issue – especially issues that are as emotional as environmental problems – I have realized that doing so opens up a broader and more open-minded forum for discussion on the world stage.”

“I love that UC San Diego is so close to the ocean so I can surf almost every day before classes,” she added.

By Virginia Watson
6 Mins read
From panelists to negotiators and attendees, GPS had boots on the ground at the major international climate event and presented new research on practical climate and trade policies and practices
AlumniCareersStudents

By GPS Media
1 Mins read
Lis Best ’12 was hired by alumna Molly Gavin ’03 as an intern at Qualcomm, Inc. and by the end of the summer, she was offered a full-time position as a senior analyst after graduation.
AlumniCareersStudents

By GPS Media
1 Mins read
David Levitch ’06 is a senior manager at Nielsen in Vietnam. He hired GPS student Hrishikesh Somani from a resume book distributed from Career Services.
×
DegreesPhilanthropyStudents