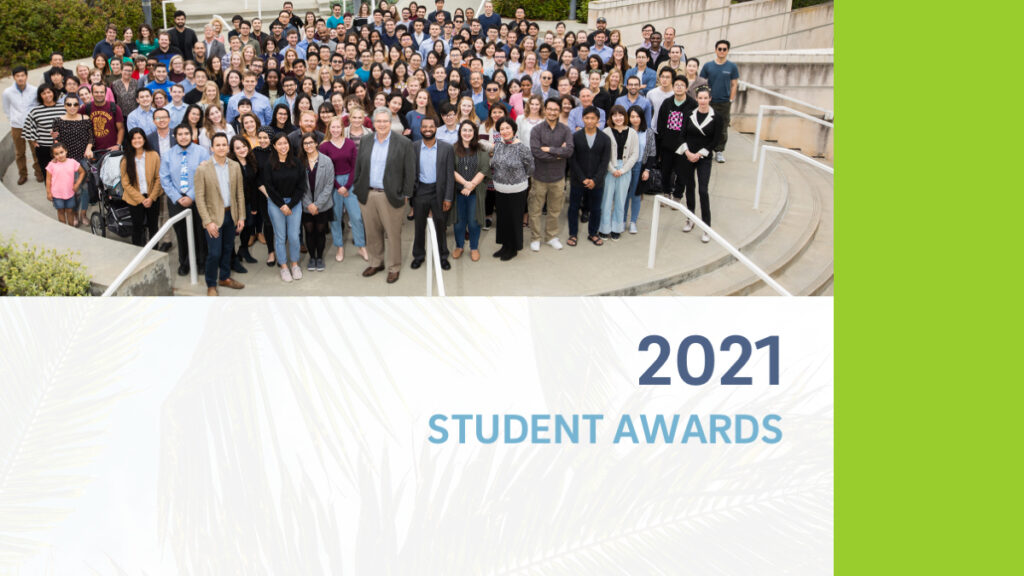 From research on women’s empowerment to efforts to bring student community together, GPS students honored with school’s annual awards

By all accounts, it’s been an academic year like no other, yet students at the UC San Diego School of Global Policy and Strategy (GPS) rose to the occasion. Some of this year’s outstanding graduates were honored virtually in the annual student awards ceremony, which was aired during the GPS 2021 commencement ceremony.

“We pride ourselves on attracting the most remarkable students from around the world,” said Dean Peter Cowhey. “For nearly two decades, one of my favorite activities as the dean of GPS has been to honor student awardees for excellence in their studies.”

In presenting the awards, Cowhey noted that this is his last year as dean, paying tribute to both the current winners as well as previous awardees.

“We’re proud of these students in many ways. They’ve excelled, despite the challenges posed by a global pandemic,” Cowhey said.

“Clearly, these students exemplify what we hope we’ll be seeing as the marks of excellence of GPS,” Cowhey said.

Rafael Fernández de Castro announced that Emily Carlton was the winner of the Joseph Grunwald Memorial Award, which honors a student’s significant contributions to the promotion of inter-American understanding.

Fernández de Castro noted Carlton’s deep commitment to Latin America, her interest in working with other Latin American students and faculty and her dedication to improving U.S.-Latin American relations.

“You, Emily, embodied those characteristics, and that’s why we’re presenting to you this award,” Fernández de Castro. “I know you’re going to make a difference…I’m glad that you were our student.”

Sandra Pedregal named Kathryn Hillis as the winner of the Language Achievement Award, which celebrates a student’s achievements in language study.

“Even though Ms. Hillis came into the class with a much more advanced level than the rest of the students, she did not take advantage of this,” Pedregal said. “On the contrary, she worked much harder to improve her language abilities and acquire a higher proficiency.”

Jaluka was also honored with the Econometrics Award, which recognizes the paper with the best research design and empirical execution. Her paper, “Does Women’s Empowerment Programming Protect Against Intimate Partner Violence?”, focused on women in rural Bangladesh.

GPS assistant professor Gaurav Khanna, who presented the award, called it an “important contribution to the understanding of the relationships between women’s empowerment and domestic violence in the developing world.”

“Importantly, she finds that community-driven external empowerment protects women from intimate partner violence, but internal empowerment can produce a backlash effect and lead to an increase in domestic violence,” Khanna said. “This has strong relevance for our understanding of policy surrounding women’s empowerment in the developing world.”

Jaluka’s paper was one of several honored for their incredible research during their tenure at GPS; Aurora Livingston was awarded the Ruth Adams Award, which is given to a research paper that exhibits outstanding analytic writing.

Livingston’s winning paper, “Unlocking the Vote,” focused on the topic of felony disenfranchisement – both an overview of how American convicted of felonies are denied the right to vote and also how they can be productively reintegrated into society.

“The strength of the paper is in its careful comparison of re-entry programs in four American cities, including San Diego, and how those programs might include a civic participation component,” said GPS professor Stephan Haggard, who announced the award.

GPS associate professor Jennifer Burney noted that Rodriguez Heredia’s paper was outstanding in its analysis of satellite-based measurements of air pollution and a comprehensive record of 3 million births across Northern Mexico, which highlighted the various ways air pollution impacts infant survival and weight.

“These are important metrics because they are predictive of other health issues children may have and tell us about the hidden costs of air pollution,” Burney said. “As such, they can truly change the calculus for mitigation policy.”

Burney noted the Richard Covington Award includes a stipend so that Rodriguez Heredia can follow up on a number of questions he encountered while conducting this research.

Along with the outstanding research and academic achievements, a number of students were honored for their contributions to the GPS community in other important ways.

Jesse Nasland was voted by the Class of 2021 as the best core curriculum teaching assistant.

“I’ll personally never forget those times where Jesse stayed an additional 45 minutes up to an hour… just to clear up some misunderstandings or help us really connect those ideas we learned in class to what we were doing in our homework assignments,” Mata Ochoa said. “That extra effort really did make a difference.”

Another person recognized for his significant contribution to student life within their first year of GPS was Michael Hatch, who was named the winner of the Doming Liu Award. Hatch showed leadership early during the COVID-19 pandemic – during which the cohort couldn’t gather for any in-person events – by creating his own recurring Friday evening online social hour.

“Despite a tumultuous and strenuous three quarters of online school, Michael has ensured there’s a space for GPS students to meet and socialize over Zoom every week,”  said McKenzie Richardson, 2022 GO GPS president. “Many students look to him as a creator of community and a person who seeks to make a space at the table for everyone.”

Another student honored for her leadership, excellence and devotion to the GPS student body was May Thach, who won the Ayal Margalith Memorial Award. During her tenure at GPS, Thach has participated in work with the International Students and Programs Office, completed equity, diversity and inclusion work as a GPS EDI Fellow, and been an active member of the GO GPS Women Going Global board.

“If you’re a member of the GPS community and you don’t know May Thach, I’d be surprised,” said Caroline Novit, 2021 GO GPS president, who announced the award. “Over the past two years, May has expressed the utmost compassion and commitment to her cohort. May approaches every project with a level of enthusiasm and relatability that truly makes her a pleasure to work with.”

The MAS-IA Class of 2021 also honored Lance Garnett with the MAS-IA Peer Award for his professionalism, scholarship, collegiality, integrity and service.

“His classmates were effusive in their praise of Lance, noting that he invites others to sharpen their own thinking and that he represents the best of our common objectives of providing both service and in kindness,” said Haggard, who announced the award.

During the awards, 2021 GO GPS Vice President of Events Leo Do announced that Joe Bettles was voted by the graduating class to be the student commencement speaker.

“Joe’s enthusiasm, curiosity and kindness has made him a dear friend and a personal role model of mine,” Do said. “He embodies what it means to have an insatiable drive to learn, with an aura to bring different people together… [and] what it means to be a student here at GPS.”

Students had the opportunity to award an outstanding faculty member for their contributions to the student body, and 2021 GO GPS Vice President of Academics Benjamin Swearingen announced that this year’s winner of the Faculty Recognition Award was associate professor and associate dean Gordon McCord.

“As the associate dean of student affairs in a tumultuous time for all, Professor McCord has demonstrated immense dedication to the GPS community,” Swearingen said. “Whether it’s directing the new Sustainable Development Goals Policy Initiative or encouraging research assistants through the slog of learning to glean data, his laser-focused passion for tackling global disparities in novel ways and ability to share his incredible breadth of technical expertise in an approachable manner has truly inspired students.”