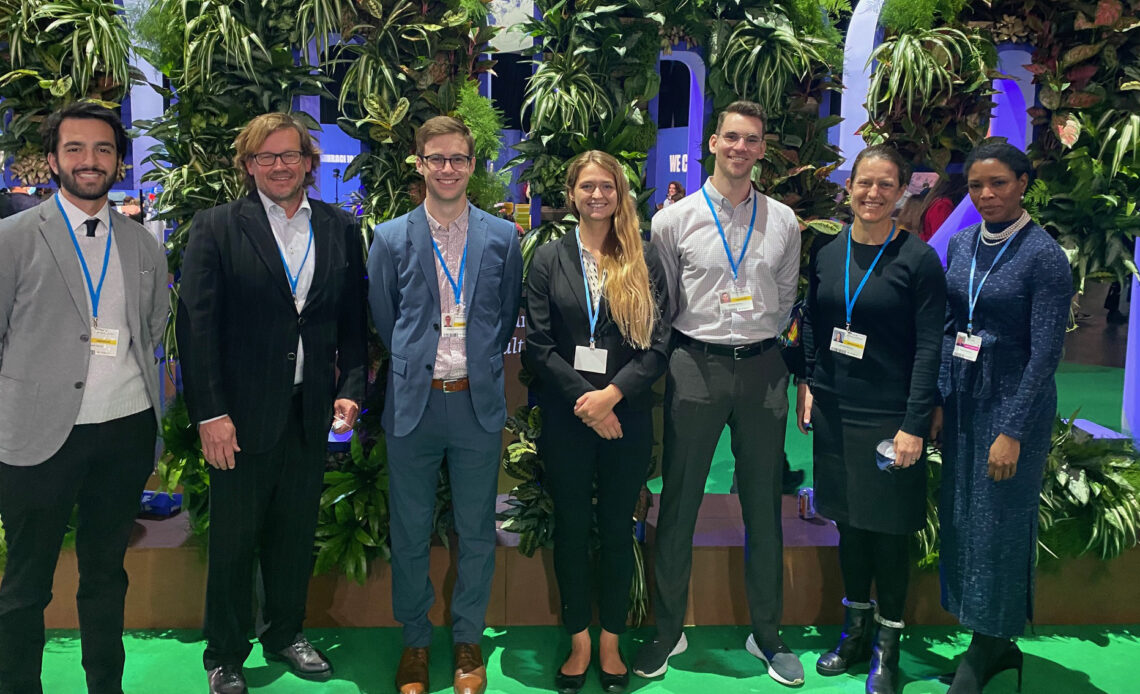 From panelists to negotiators and attendees, GPS had boots on the ground at the major international climate event and presented new research on practical climate and trade policies and practices

As policymakers, thought leaders and activists descended upon Glasgow for the 26th UN Climate Change Conference of the Parties (COP26), among them were alumni, students and faculty of the UC San Diego School of Global Policy and Strategy (GPS).

COP26, held Oct. 31-Nov. 13, brought together people from more than 200 countries to explore strategic, international solutions to meet the goals of the Paris Agreement and the UN Framework Convention on Climate Change.

The Honorable Pearnel Charles, Jr., of the Government of Jamaica, along with GPS professors Renee Bowen, Jennifer Burney and David Victor and Margaret Leinen, director of Scripps Institution of Oceanography, participated in a discussion at a COP26 panel about the revelations in the new report, “The Role of Trade in Addressing Climate Change: Recommendations for Policies and Practices.” The report addresses the important link between climate action and trade cooperation. The panel was co-hosted by the Government of Jamaica and the Center for Commerce and Diplomacy.

“With this report, we’re sharing our best research and ideas on how global cooperation on climate and trade policies can benefit us all as we address the issues that define our generation,” Bowen said.

Back home in San Diego, professors shared their COP26 experience at a Deep Decarbonization Initiative (DDI) event Nov. 17. Victor noted that the event included many pledge announcements from companies and corporations, ranging from airlines and jet manufacturers to financial institutions, indicating those companies were interested in the visibility these pledges bring and in collective action.

“The signal of all of this activity has gone way up, and the noise has gone up even higher,” Victor said. “There is so much attention on the need for action on climate change, but it is still hard to figure out which of the efforts will prove consequential.”

Burney said this was her first time attending a COP summit and described it as a “real treat,” as she has spent the bulk of her career researching emissions accounting.

“My impression was that the U.S. is putting itself forward as a leader, and I too left optimistic, though there is a razor-thin margin of support for this climate agenda,” Burney said.

GPS’s academic focus on climate and environmental policy has grown exponentially in recent years and has produced a number of alumni who now serve as leaders in organizations shaping international climate policy.

Laura Tierney ’07 studied international environmental policy with a China focus at GPS and now works for the Business Council for Sustainable Energy in Washington, D.C. Tierney has attended over a dozen COP events since 2008 and said the annual meeting has grown exponentially in size and scope.

Tierney said the “tremendous, positive” participation of the global business community and equally strong participation from youth was incredibly important.

“Youth participation keeps the pressure on both governments and businesses to keep their eyes on the real work at hand, finding ways to partner with each other and deliver emissions reductions quickly. Their participation also pressures decision makers to make smart investments in our economies that will create more resilient communities and bend the long-term trajectory of global emissions toward the 1.5 degree Celsius goal,” Tierney said.

Tierney noted that GPS is uniquely and well placed as a professional school at which to study environmental policy.

“You have the leading scientists at the Scripps Institution of Oceanography. You have a solid foundational toolbox of core GPS classes that help interpret and understand this global intergovernmental policy approach to addressing climate change. And California is a state that is leading the way with climate and energy policies because it is dealing with the devastating impacts of climate change,” Tierney said.

“I’m one of those insiders who knows when a comma gets changed in Article 5,” Verdieck said. “Negotiators live in a different world than those going to the events.”

Verdieck stressed the ongoing importance – and career opportunities – as the world continues to grapple with climate change.

“There is this big international framework of the Paris Agreement that provides scaffolding, but there are ongoing needs for implementation on the ground, whether that’s in California or Fiji or with forests or steel,” Verdieck said. “Look for careers in all of those to help build resilience around the world.”

Four GPS students, all part of environmental tracks in their graduate programs, were selected to attend COP26 – an annual opportunity managed through GPS Career Services. Once students are selected, their plane tickets, hotel stays and other transportation expenses are reimbursed through professional development funding.

“It makes attending the conference a lot more inviting – it’s a special opportunity because our expenses are covered,” said Kenneth “Cashin” Brown.

Brown noted that some of his most valuable memories from COP26 were attending sessions led by Indigenous leaders – sessions which, he pointed out, were often disappointingly empty – and speaking with locals in Glasgow on their views about climate.

“Sometimes climate policy isn’t grounded in the reality of everyday people’s lives,” Brown said. “I wanted to compare opinions of people on the ground living without access to the event, take their thoughts and concerns and see if those concerns were being talked about or met.”

Students said the sheer number of moving parts and security at the complex event was intimidating in their first days in Glasgow.

“Attending the conference was definitely overwhelming at first – there were countless politicians, environmental experts, observers and everyone in between,” said Emily Collins. “Luckily we students were able to meet up several times at the conference and help each other out to find different meetings and negotiations to attend. We were also able to explore a large number of booths set up by NGOs and countries, which was an incredible way to hear perspectives from a wide range of people.”

“It’s one thing to read in the press that negotiations are progressing slowly, and it’s an entirely different thing to live it,” Santos-Davidson said. “My previous work on environmental issues has been at the local level, so it was very interesting to be at COP26 and see how the little tiny things I’d done fit into the larger global context. GPS has given me new knowledge and analytical tools to understand what was being said and often to be able to infer why something was being said.”

Michael Gaffney said that having the opportunity to witness the negotiations on climate finance  in particular gave him a unique insight into how climate policies are facing a “classic collective action problem.”

“It was super interesting to read the coverage of the event after having watched the negotiations and seeing how developed nations characterize what they’re doing and how developing nations pushed back on that,” Gaffney said.

The students gathered one night for dinner with Burney, Victor and Verdieck, and both the professors and alumnus shared a number of tips for navigating COPs and insider insights into the ongoing negotiations.

“I am so thrilled we could help sponsor our students to attend this event and see diplomacy up close and personal – and to see all the other activities at these COP events that, over the long term, probably matter more than the diplomacy,” Victor said.

“Climate change policy is so much more complicated than we tend to think,” Collins said. “While it is easy to point fingers at different actors and countries and simply yell at everyone to stop emissions, there are so many more issues at play that make agreements and changes harder to reach.”