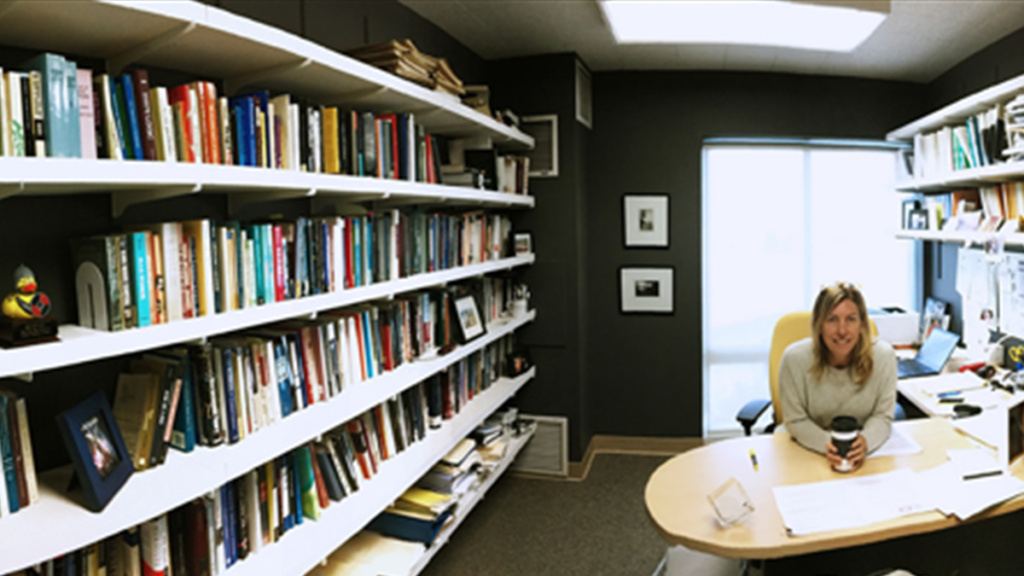 The misuse of Facebook data by Cambridge Analytica, the politicization of U.S. intelligence agencies, and the civil wars crises plaguing regions in the Middle East, Africa and beyond are just a few of the topics tackled in Political Violence @ a Glance. The blog was launched by Barbara F. Walter, political science professor at the University of California San Diego’s School of Global Policy and Strategy.

Walter, and the blog’s co-founders, were recently honored by the Online Achievement in International Studies Awards (also known as “the Duckies”). This is the second time the blog was awarded for its thoughtful application of news events and relevance to ongoing scholarly and policy debates in international relations.

“This blog is a way for me to remain deeply connected to what is going on in the wider world and to bring the knowledge that we create at UC San Diego to pressing policy problems,” Walter, an expert on security, civil wars and rebel groups, said. “I’m always amazed at how many people read the blog and how important it has become in D.C. circles.”

The blog was first honored in 2015 and in recent years, the grand prize went to the Washington Post’s Monkey Cage, which Walter frequently contributes to as well.

Walter’s expertise has been sought by the U.S. State Department, the Central Intelligence Agency, the United Nations, foreign governments and more. She recently briefed the U.S. Senate on the prospects for peace in Syria in February and has appeared on CNN numerous times.

“Professor Walter’s distinguished career exemplifies the impact faculty and research at the School of Global Policy and Strategy have on global conflict and cooperation,” said Peter Cowhey, the school’s Dean, and Qualcomm Endowed Chair in Communications and Technology Policy. “Her rigorous scholarship on civil wars, extremism and terrorism continues to shed valuable light on the world’s conflicts.”

Founded by Walter and Erica Chenoweth of the University of Denver in 2012, the blog consistently produces expert analysis of problems related to violence and protest in the world’s conflict zones.

Notable entries from Walter include “Why Civil Wars have Gotten Longer, Bloodier, and More Numerous”, which details how the internet’s spawn of global, instantaneous communication has transformed and elongated the ways civil wars are fought.

“The internet has created incentives for warring factions to frame their struggle in global terms in order to attract the widest audience of supporters,” she writes. “This creates greater opportunities for outside states to become involved in the war to try to influence the outcome.”

She added, “The current civil wars in Syria, Iraq, Yemen, Libya, Chad, Nigeria, Somalia and the Central African Republic (to name a few) are exhibiting all of the characteristics of internet-era conflicts. All of these wars broke out post-2003. All of them are being fought by multiple armed factions. All are distinctive for their brutality toward civilians.”

Though Walter largely focusses on civil wars In Political Violence @ at a Glance, her and other contributors often delve into other subject areas to translate academic research and statistical studies into material that is accessible and engaging.

For example, Walter explains how socioeconomic frustrations in 1920s Europe mirrored some of the dissatisfaction Middle America expressed in the lead up to the 2016 presidential election in a blog post titled “Why My German-Born Dad is Terrified of Trump.”

“The Americans who are voting for Trump are dissatisfied and frustrated,” she wrote. “Their world was crumbling, their pride is hurt, unemployment is high and partisanship divides the country. In their view, America is not changing for the better. Trump is taking advantage of this.”

When asked about the value of blogging, Walter points out that it benefits the general public, policymakers, and academics.

“My first love is research,” Walter said. “Blogging is definitely my second love and it’s the way that I can potentially have much greater impact. People are desperate for high quality analysis, especially of complex current events. I think the blog does a really good job explaining what’s going on in the world in an engaging way. It’s really fun to write for it. I hope it’s equally fun to read.”