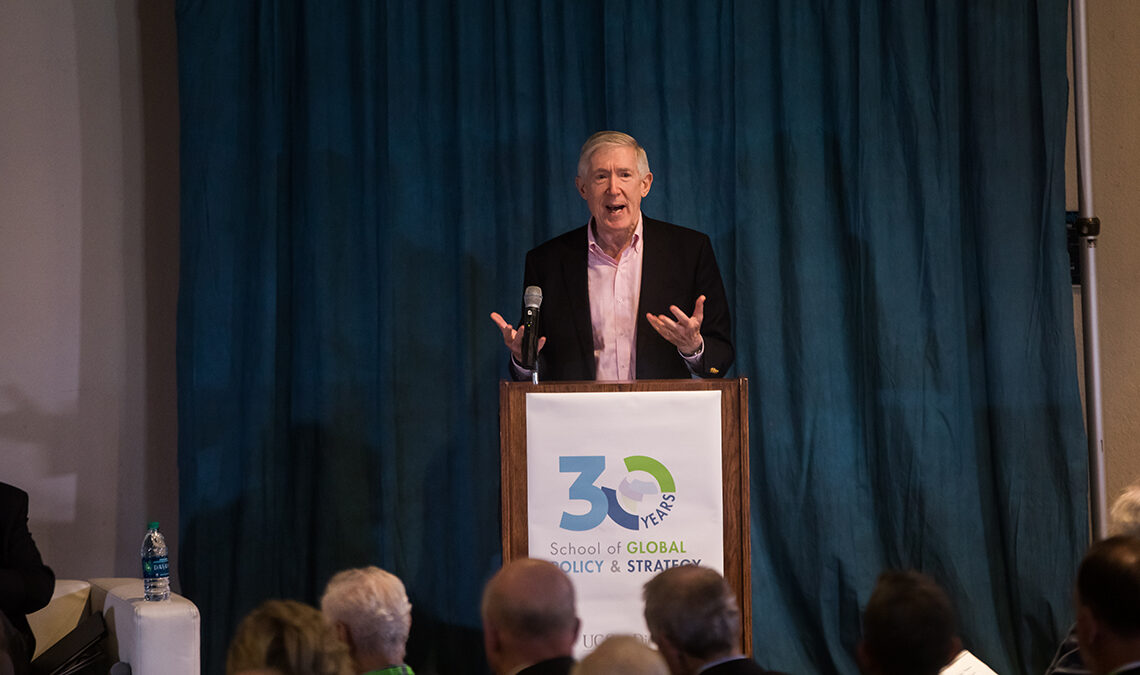 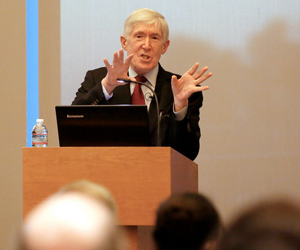 On a Monday afternoon, Robert Hormats is scrolling through his iPad at the UC San Diego School of Global Policy and Strategy (GPS). Sunrays stream through the window of his third-floor office, hitting his face. It’s a portrait unlike most of his workdays that are spent at Kissinger Associates Inc. in New York—at least on this day when it was cloudy and 39 degrees back in the Big Apple.

From Feb. 1-14, the vice chairman at Kissinger Associates traded offices to participate in the Center on Global Transformation’s Pacific Leadership Fellowship (PLF), including delivering a public talk on “Lifting Iranian Nuclear Sanctions: Opportunities and Risks for Iran and for Potential Investors.” For Hormats, however, the residency held a meaning greater than just imparting his wisdom to students and local community members on international trade, foreign investment in the U.S. and energy issues. It also made for a reunion of sorts, reconnecting with old friends of the School and returning to where he delivered the 21st Century China Program’s third annual Robert F. Ellsworth Memorial Lecture in 2015.

We connected with Hormats mid-stay to hear his impressions about the fellowship, including how it invoked some contemplation about his career.

What led to your return to GPS as a PLF?

RH: Everything seemed to align to do this. I’d been out here on numerous occasions to the School and friendly with members of the faculty for quite some time. GPS is a remarkable group of people. When I was out a little while ago to give the Ellsworth lecture, we had dinner one night with Peter (Cowhey, dean of GPS), Susan (Shirk, chair of the 21st Century China Program), Irwin and Joan Jacobs—who I’ve known for years—and others. Irwin said: ‘GPS has this new program. You should do this.’ It had all the right elements—intellectual activity, bright professors and students, getting to know the business community and region better and having time to do a little thinking about some of the issues.

RH: I’ve been meeting with students and a number of people in the business community. The dean had a dinner, Susan had a dinner, some other friends had dinners. I’m well fed (laughs). It’s a good way of renewing old friendships. That’s basically what I’ve been doing. There are a number of professors here I’ve known closely and some not as closely. I’m going to Georgia in a couple of weeks. I met with Assistant Professor Jesse Driscoll, and, as it turns out, he’s an expert on Georgia. Then Professor Barry Naughton is a guy I’ve known for years. We’re going to get together for dinner and discuss China’s international and domestic economic policy.

You studied international relations at the Fletcher School of Law and Diplomacy and were formerly on the dean’s council at the John F. Kennedy School of Government at Harvard University. Getting to know GPS more intimately, what sets it a part from other schools?

RH: There are two things, one of which is a focus on Asia. GPS is global, but it has some extremely high-quality, Asian-related expertise. I’ve enjoyed that. I think that’s because we should be spending more time on Asia in general, academically. Second, it’s very quantitative. Students learn a lot of valuable quantitative skills, which is important. That’s something few schools have. I’ve also been impressed with the way it integrates itself with the San Diego community. People in the community respect the School and see it as a big asset for the region. Since there are a lot of companies in the area that are international—Qualcomm Inc. being one, Sempra Energy being another—they see the School as an important resource for recruiting high-quality talent and interacting with the professors. 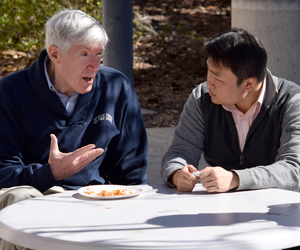 Through all of your accomplishments—including serving as Under Secretary of State for Economic, Energy and Environmental Affairs (2009-2013) and for 25 years as vice chairman of Goldman Sachs International—can you pin down a proudest moment of your career?

RH: I think it’s interesting. My first job was working for Henry Kissinger as his sort of junior economic adviser just as I was getting out of graduate school. It was a big break. Life is never fully planned. Opportunities sometimes emerge, or not. This happened to emerge as a really good opportunity. I felt that was a positive part of my career in that it started out as way of working on things in the Middle East, playing an early role in normalization with China. Things that are significant pieces of history are what I’m proud of, as well as working with Hillary Clinton when she was secretary of state on such things as economic statecraft.

RH: The goal in your career is to find jobs you really enjoy doing, jobs you’re enthusiastic about. If you’re not enthusiastic about a job, you’re not going to do as well. My advice to people is pick something you find meaningful and you’re enthusiastic about, and don’t be afraid to assert your views. Frequently the thing you regret most is if you have had an idea and you’ve missed the opportunity to convey it. If you’re right, you can be helpful in a policy process. If you’re wrong, at least you’ve given people something to think about. The policy process doesn’t work if it’s a monolith. It needs different points of views, different perspectives. People with different backgrounds, educational experiences, lifestyles, etc., bring an added dimension of knowledge to the policy process. Use your intellect, your background and your perspectives in discussions. Don’t be hesitant to speak up when you have an idea.

View a photo gallery of Hormat’s visit, and watch a video of his public talk