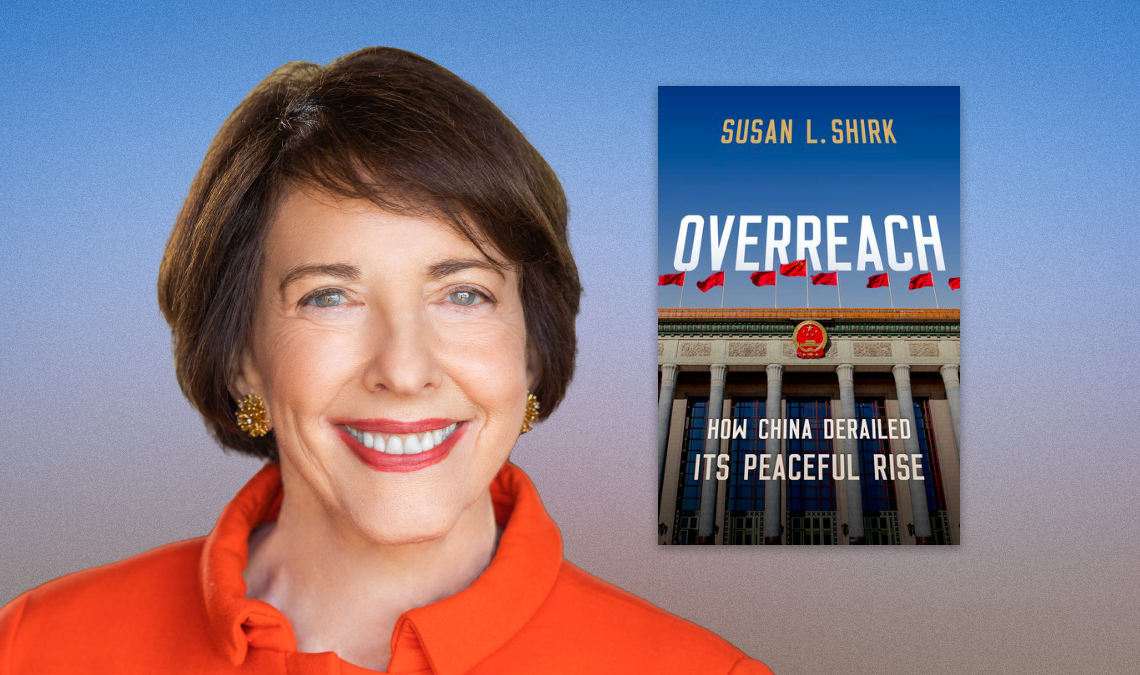 By definition, “overreach” means taking things too far by doing too much or trying to gain too much – ultimately defeating oneself in the process.

And a new book from Susan Shirk, chair of the 21st Century China Center and research professor at the UC San Diego School of Global Policy and Strategy (GPS), explores the concept of overreach in China’s politics and the country’s evolving role on the world’s stage since 2008.

She first visited China in 1971 and has been teaching, researching and engaging with China diplomatically ever since. Beyond the classroom, Shirk was the former Deputy Assistant Secretary of State in the East Asia and Pacific Bureau during the administration of President Bill Clinton.

She sat down with GPS News to discuss the concept for “Overreach: How China Derailed Its Peaceful Rise” and the worldwide implications of the country’s actions over the past 15 years.

“Overreach,” which releases Oct. 18, is available for preorder via Oxford University Press, Bookshop.org and other retailers.

How did the idea for this book come about and how long have you been working on it?

In the mid 2000s, China started acting differently. In its foreign policy, it became more assertive, especially in the South China Sea, and then domestically, too, it tightened up control over the media and over social life.

It began shortly before the 2008 Olympic Games. At first I thought they were just tightening up before the Olympics to make sure everything went smoothly so that afterwards, things would loosen up again, but then they never did. I was really puzzled as to what was driving the changes in policy, and I started the research then.

We’re heading into Xi Jinping’s third term — an unprecedented third term. His two predecessors, according to the rules, served two five-year terms, and then turned over power to a successor. Regular turnover of top leadership was a big accomplishment for China, the first time that a communist authoritarian regime had achieved that. But Xi has scrapped the term limit and and restored a personalistic dictatorial regime, similar to that of Mao Zedong. We’re about to have the 20th Party Congress scheduled just a few days before my book comes out. And at that meeting, the party will almost certainly give Xi a third term. The book is timely because it talks about his overreach in foreign policy and domestic policy, which is likely to continue or even intensify in his third term.

So who would you say is the intended audience for this book?

I wrote it for a broad audience of people who are interested in China, who are worried about China and who want to understand what’s driving Chinese behavior. I tried to make it vivid and interesting. It’s based on a lot of interviews that I’ve done on the ground in China. One of my reviewers mentioned that it avoids any jargon, so it’s interesting and comprehensible to everybody.

What’s the biggest takeaway you’d like for your readers to have after finishing your book?

What you can learn from reading my book is how the Chinese political system causes overreach in both its collective leadership and more concentrated personalistic leadership forms. And then I’d like people also to understand that it’s not just Xi Jinping’s personality or background that are driving the current overreach; it’s the way the system operates in this personalistic system. Chinese officials and politicians, in order to protect their own careers in this top-down, high pressure system have to compete with one another to prove their loyalty to the Party and to Xi Jinping. The way they do that is by “bandwagoning” on Xi’s policies, praising him and implementing his policies even further than he might have wanted them to. That fetish for loyalty and the bandwagoning dynamic are likely to get worse over time in the third term.

What other projects are you working on right now?

The 21st Century China Center just released a policy report on China after the 20th Party Congress, in which all of our faculty are looking at the trajectory of the Xi regime as we see it today and projecting it into his third term. I think that is something that people will want to read for sure.

I’ll also be holding a book talk on Oct. 6, both in person in the Great Hall at UC San Diego and virtually over Zoom. I’d love for everyone to attend.