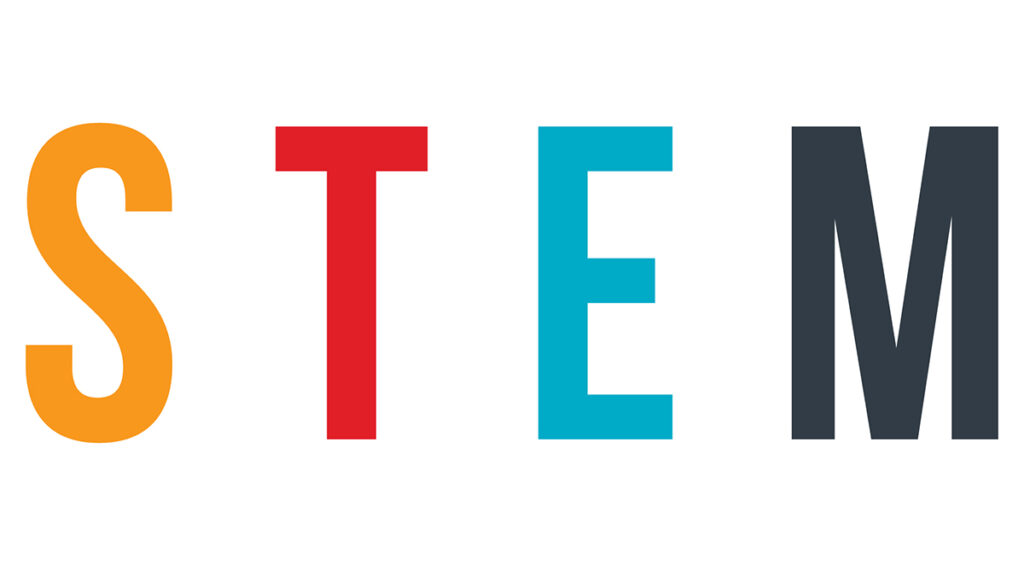 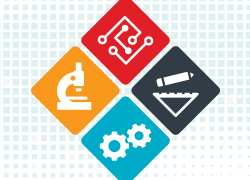 When most of her first-year classmates headed home after fall quarter to untangle their minds from final exams, Christine Pereira, MIA candidate 2017, ventured to San Francisco to be one among a sea of 24,000 people discoursing on earth and climate sciences.

And though the topics of the American Geophysical Union’s (AGU) Fall Meeting might seem dense to some graduate students in international affairs, for Pereira who aspires to work in ocean policy, it was her oyster.

“Initially, I was interested in attending to learn more about science, technology, engineering and mathematics (STEM), specifically ocean sciences,” Pereira said on a phone call from the meeting, held at the Moscone Center from Dec. 14-18. “What I’ve learned is there are so many different opportunities out there surrounding environmental policy.”

With support from the UC San Diego School of Global Policy and Strategy (GPS), Pereira attended the 48th annual meeting as a student representative of the School with Assistant Dean Wendy Hunter Barker and Assistant Professor Jennifer Burney, who also was a speaker at the conference presenting on aerosol impacts and the U.S. transition to natural gas.

2015 marked the School’s first year to attend an AGU function—by no coincidence the same year of its rebranding to GPS.

Aligned with its updated mission to shape better solutions for a transforming world with collaborations across UC San Diego and the globe, GPS also is putting a heavier emphasis on marrying policy with STEM and health sciences under its new banner.

“UC San Diego’s excellence in STEM combined with our strength in complex policy and regulatory issues make this a natural extension of our School’s expertise,” Hunter Barker said. “Our faculty’s research spans the globe, including many topics at this nexus, and our students are eager to receive training on ways to utilize solid scientific data for relevant policy options.” 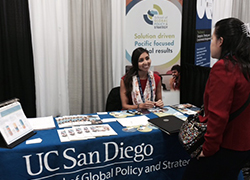 Attending the AGU Fall Meeting acted as a springboard into the School’s advancements in STEM policy in 2016.

Tagged as the largest earth and climate science meeting in the world, the 2015 AGU Fall Meeting comprised roughly 23,000 presentations, including a keynote by Tesla CEO Elon Musk; 50 networking and career advancement opportunities; and nearly 300 exhibitors, including GPS.

For Pereira, the conference meant an opportunity to become more informed on the latest discoveries, trends and challenges in the sciences as well as to build connections in that community.

In the exhibition hall, positioned at GPS’s booth immediately next to UC San Diego’s Scripps Institution of Oceanography, Pereira put a face to the GPS students who chose to pursue a master’s degree at the School for its already existing strengths in STEM policy.

Among other factors, it was GPS’s close ties with Scripps Oceanography that ultimately brought Pereira to the School, she said.

“My background is international studies, mostly social science,” she said. “I wanted to follow up with international affairs, and I knew I wanted to work on the ocean. But I’ve never taken an actual science class.”

To that end, she has her sights set on enrolling in courses at Scripps Oceanography that will complement her curriculum at GPS. She also is beginning a marketing internship at the institution in winter quarter, allowing her to gain a fuller understanding of how her interests can be combined into a productive career.

Beyond this one student example, GPS faculty members such as Burney, Joshua Graff Zivin, David Victor, Junjie Zhang and others are carving a space for STEM into their research and courses. As leaders in their fields, the professors regularly create global policy recommendations on emerging markets, climate change, global health and other pressing societal challenges.

The focus also is threaded through the School’s student groups and programs. The Baja Project, for example, partnered with Scripps Oceanography in September on its quarterly trip to El Barril to vet the possibility of building a marine research lab in the Mexican fishing village on the Sea of Cortez.

On the programmatic side, GPS has invested in promoting STEM policy through its Science Policy Fellows Program. In its second year, the program provides UC San Diego doctoral students in STEM fields with a GPS faculty mentor and stipend to explore the policy implications of their research. It hosts three signature events per fellowship term open to all on campus, creating an environment where those interested in these topics can engage in meaningful conversations and brainstorm potential collaborations.

“Academia is becoming increasingly interdisciplinary—a necessary step in meeting the nuanced challenges facing our planet,” Hunter Barker noted. “In stride with this, GPS is on mark to be a leader on matters where STEM and policy meet.”

Be on the lookout for a new STEM section in GPS News debuting in February, which will feature a story every month on the School’s ongoing involvements in STEM and health science. And stay updated on the School’s advancements in real time via social media by following and using the hashtag #gpsSTEM.