Navigating the complexities of academic publishing, as told by a former student 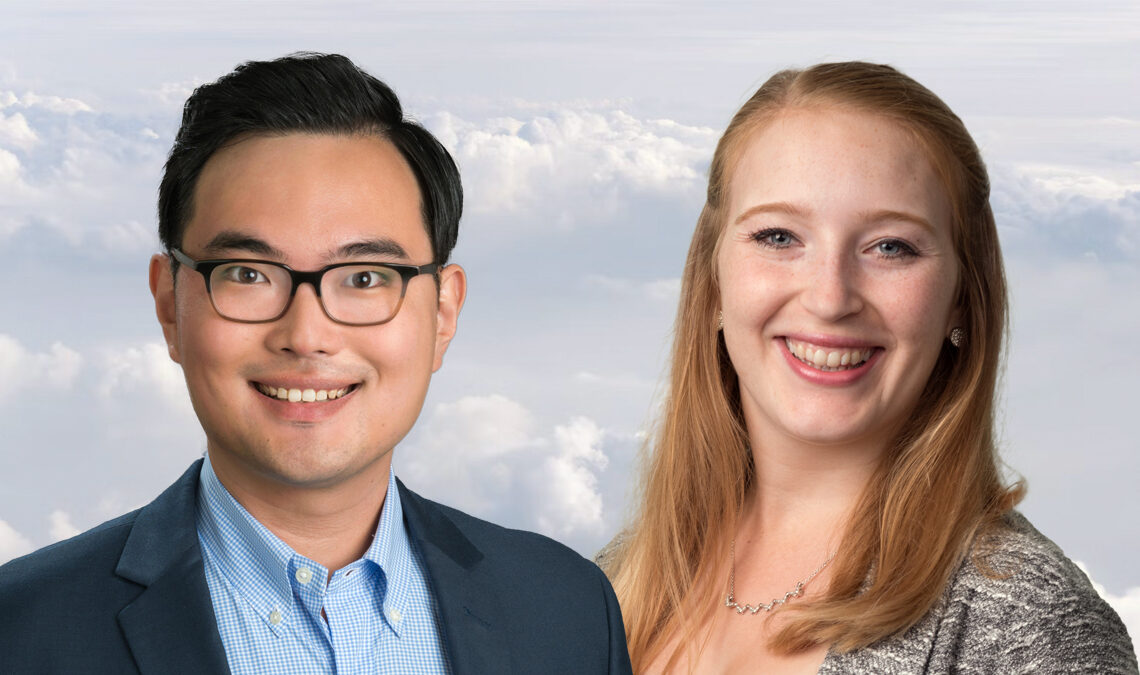 GPS grad Rachel Finerman shares her experience as a coauthor of an academic publication on COVID-19, commuting flows and air quality with professor Munseob Lee

In early 2020, Master of Internal Affairs (MIA) student Rachel Finerman was making plans for what to do after she graduated from the UC San Diego School of Global Policy and Strategy (GPS) that June, intending to spend a year abroad.

But when the world changed abruptly in March 2020 because of the coronavirus pandemic, those plans had to be put on hold.

With the world in flux, Finerman elected to remain close to UC San Diego after graduation, applying to be GPS professor Munseob Lee’s research associate for the summer.

Lee said he was familiar with her effective communication and writing skills from her time as his student, and the additional skills Finerman had acquired during her time at GPS gave her an edge in the hiring process.

Finerman was quickly looped into Lee’s newest research project, focusing on how the changes in commuting behavior during the pandemic affected the Korean economy. She quickly began finding and cleaning data, examining related papers and working on data analysis.

Lee said it became clear after the first few weeks that Finerman was going above and beyond in her contributions to the project, and he asked her to join the project as a coauthor, meaning her involvement would extend far beyond her time as a research assistant.

Finerman shared that she was “incredibly grateful” to be asked to dive deeper into the research and to be included as a coauthor on the paper, which was published in December 2021 in the Journal of Asian Economics.

The experience gave Finerman the unique opportunity to see firsthand what it’s like to submit to an academic journal, which ultimately took a year and a half from project start to publication.

After completing her research assistantship, Finerman began working in the U.S. office of ICEYE, a company that builds and operates Synthetic Aperture Radar (SAR) satellites, in November 2020 and then moved to ICEYE’s Finland office in October 2021.

“I contributed a lot of my work on the paper after my faculty research associate position had concluded and I started a full-time job,” Finerman said. “I had to learn how to balance everything and often worked on the nights and weekends to make sure I got everything done successfully and on time.”

At some moments during the extensive process, Finerman acknowledged she felt “impostor syndrome,” questioning her skills and talents in this new and unfamiliar environment.

“I had never had formal training in how to write an article for publication,” Finerman said. “Every related article I read that formed the basis of our literature review seemed to be written very elegantly and professionally, and I didn’t know if my writing lived up to those other articles. But Munseob was an excellent guide and encouraged me along the way, and I continued to feel much more confident as I went.”

Lee said in their initial submission, he and Finerman received reports from two anonymous reviewers, experts in the field, questioning several points and suggesting several modifications.

“We prepared a 23-page response letter, which is even longer than the paper itself,” Lee said. “It may sound surprising, but that’s what I do for every academic publication.”

Finerman said she learned a great deal about how scientific knowledge is built through the peer-review process.

“Before this experience, I didn’t know that there could be a lot of back-and-forth between the authors and the reviewers to address feedback before the submission could get accepted,” Finerman said. “I was grateful to read the feedback from the reviewers and get the chance to update the paper because it made it stronger in ways we hadn’t considered before. It’s nice to have the chance to update the paper rather than simply getting a hard ‘no’ if the paper isn’t exactly what the reviewer is looking for.”

Finerman said she also learned that the journal submission process isn’t equal across the board – each journal has varying requirements and a different set of reviewers that provide a wide range of feedback.

“It’s great to know that if I decide to submit to academic journals again in the future, I won’t get my hopes up if a journal doesn’t accept my submission, because there could always be another journal out there where my submission would align very well to the publication,” Finerman said.

Finerman said she is incredibly grateful for the opportunity to contribute to academic knowledge-building through this process.

“At UC San Diego, I read the research of so many talented and inspiring academics, all from a small handful of platforms like Elsevier,” Finerman said. “Getting to see a paper I had significantly contributed to – and to see my name listed as an author – on one of those online Elsevier pages in the same format as so many other articles I had read was just surreal.”

She added that she felt incredibly accomplished and proud of herself as she looked back and recognized how much work she had put in and how much she learned throughout the process to get the paper to that point.

And though she may eventually return to academia to complete a Ph.D., the experience has greatly enhanced her collaborative skills in her current job, which often requires her to serve as a liaison between different groups with expertise in a variety of areas.

“Collaborating with Munseob and working on the paper together in ways that highlighted each of our strengths helped me to be an effective and valuable contributor to the proposals that we write,” Finerman said. “And in my job, I lean on other team members who have stronger skills in some areas than I do, and I pull my weight for the parts where I have the expertise, similar to what Professor Lee and I did to successfully, effectively and efficiently produce this paper.”

Public Disclosure of COVID-19 Cases Is More Effective than Lockdowns