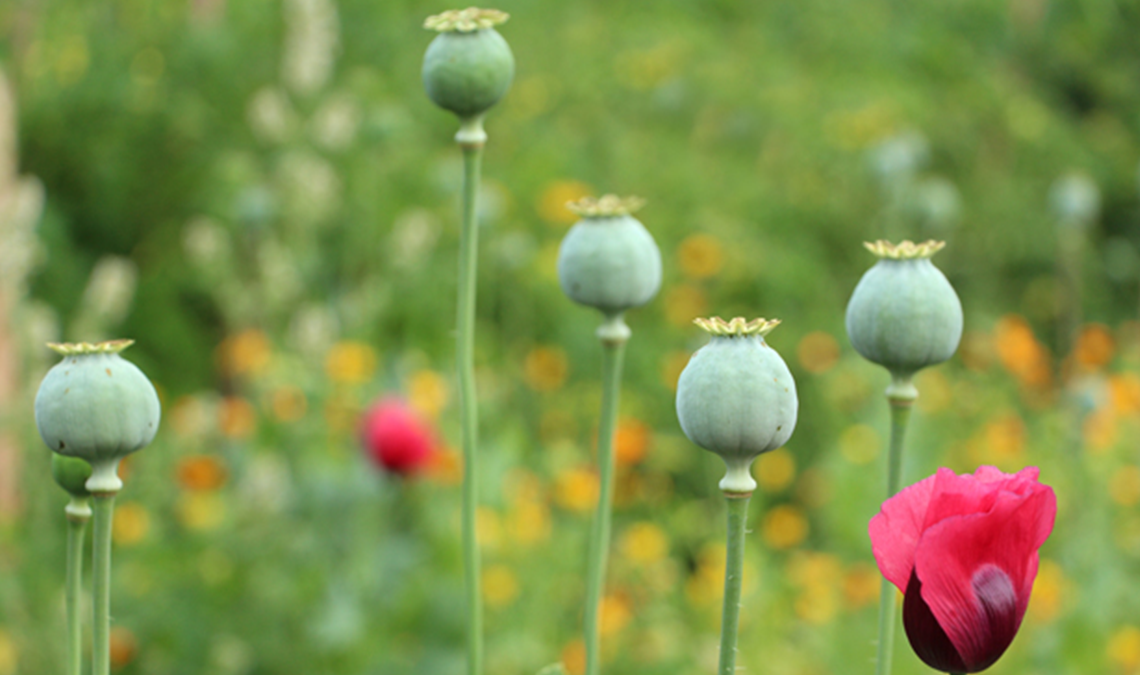 Reports of the pandemic’s impacts to the production of synthetic opioids like entangle have incentivized poppy cultivation in Mexico, which could lead to more substance abuse, violence and drug trafficking. Credit: Satirus
PDFPrint

Despite being considered the world’s third largest producer of opium and heroin, little is known about poppy cultivation in Mexico. Yet, the opioid crisis remains a huge problem across much of the U.S. and Mexico and COVID-19 appears to have made matters worse: Recent lockdowns have disrupted the flow of synthetic opioids and have ostensibly increased production of heroin in Mexico.

To address the global opioid crisis, the Mexico Opium Network, a first-of-its kind international effort, was recently launched to examine the socio-political challenges posed by illicit poppy crops in Mexico.

An estimated 128 people die every day in the U.S. from opioid overdoses, largely caused by synthetic opioids manufactured in China and Mexico. Reports of the pandemic’s impacts to the production of synthetic opioids like fentanyl have incentivized poppy cultivation in Mexico, which could lead to more substance abuse, violence and drug trafficking.

“The poppy economy is crucial to some of the Mexico’s most marginalized rural regions, despite its illegality and constant efforts at eradication,” said Rafael Fernández de Castro, director of the University of California San Diego’s Center for U.S.-Mexican Studies, a key partner institution in the Mexico Opium Network. “More research and data on the opium economy and its stakeholders is needed to understand these communities’ social realities.”

“While we know that the opium production in Mexico is the top source of opioids to the U.S. and other countries, in most publications and discussions regarding poppy cultivation in the world, Mexico is—at best—mentioned, when not totally absent,” said Cecilia Farfán-Méndez, head of security research programs at the Center for U.S.-Mexican Studies, which is based at the UC San Diego School of Global Policy and Strategy. “Therefore, when it comes to addressing challenges posed by this issue we are almost blind; however, the launch of this new network will allow us to build a decisive new space for research and public policy dialogue, both at the Mexican and the international level.”

Poppy production is often a complementary activity in the family farming economy in mountainous regions, providing a source of income that is alternated with food production, manufacturing and local trade, to sustain economies that are, in many cases, precarious. However, analysis of the social, economic, and political characteristics and impacts of opium production in Mexico has effectively been nonexistent.

The Opium network will seek to shed light on these communities by understanding: how many farmers work and live from opium poppy production in Mexico, and under what conditions? How are these illicit activities regulated? What is the economic weight of opium in Mexico?

To understand the dynamics of this market and evaluate which political responses are appropriate and effective, the Mexico Opium Network will focus on five key activities:

“The Network will be a clearinghouse for the production and dissemination of knowledge on opium poppy production, from the local to the national and international stages,” said Romain Le Cour Grandmaison head of Noria’s Mexico and Central American Program. “In addition our work will produce qualitative, field-based evidence that will be openly and freely disseminated to the public, generating an unprecedented source of knowledge on international platforms to help global communities better address the global health crises of substance abuse, illicit cultivations, violence and drug trafficking.”

More information on the network can be found on the Noria Reserach website.

‘You can always go around the obstacles’