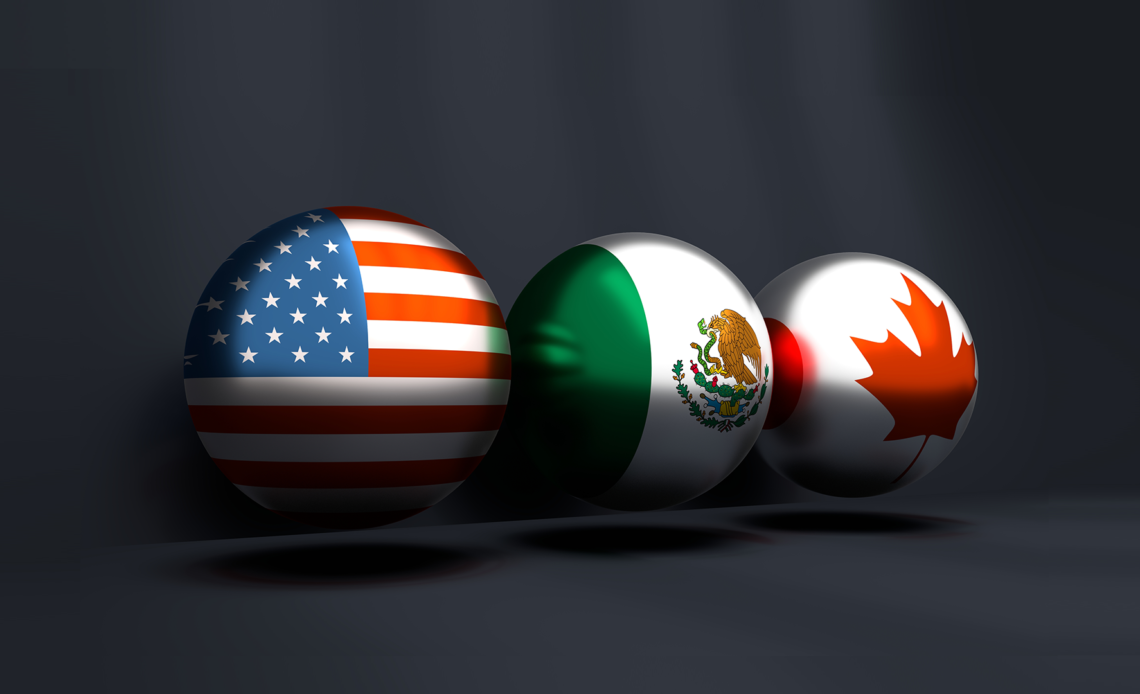 Former U.S. ambassador Christopher Landau and former head of World Bank Robert Zoellick share insights on the pandemic, the U.S.-Mexico-Canada Agreement (USMCA) and how North America can position itself in the global economy

The Global Leaders Forum (GLF) brings world leaders to UC San Diego to share insights on current trends in global policy, politics, leadership and life lessons. The forum, hosted by the Center for Commerce and Diplomacy (CCD), enriches the diplomacy dialogue at the School of Global Policy and Strategy (GPS) and the wider San Diego community, and, most of all, is an essential learning experience for the next generation of world leaders being educated at GPS.

This year’s forum was part of a larger virtual Conference on USMCA and Global Supply Chains, which was co-hosted by the Center for U.S.-Mexican Studies, that took place Oct. 21-22 and focused on issues in North American trade policy. The opening sessions featured the two keynote GLF addresses, which were open to the public: former U.S. ambassador to Mexico Christopher Landau on Oct. 21 and former World Bank president Robert Zoellick on Oct. 22.

“At CCD, our aim is to advance global economic cooperation, and to do this we must understand the policy framework around agreements such as the USMCA and other international agreements and institutions,” said Renee Bowen, CCD director and professor of economics jointly appointed at GPS and the Department of Economics at UC San Diego.

Landau focused on the implementation of the United States-Mexico-Canada Agreement (USMCA), while Zoellick discussed the idea of North America, sharing insights from the top of the world’s largest development bank and from his extensive experience in policymaking as a former U.S. Deputy Secretary of State and U.S Trade Representative.

Landau, who served as the U.S. ambassador to Mexico from 2019 to 2021, shared his experience with the launch of the USMCA, which was implemented July 1, 2020 – several months after the beginning of the coronavirus pandemic. Landau described his time as ambassador as having to tackle a “new crisis every day.”

“One of the things I learned going into government service: when you’re in, you don’t really have time to reflect on the problems and issues,” Landau said. “You have to drink from a fire hose every day.”

Landau explained that commercial relationships are a critical part of international relations, a lesson he learned from his father, who was a career foreign service officer in Montevideo, Uruguay.

He applauded the Center for Commerce and Diplomacy for focusing on the commerce and diplomacy nexus.

During Landau’s service as U.S. ambassador to Mexico, the countries faced a number of unprecedented challenges – the coronavirus pandemic, migration and implementation of the USMCA among them.

“There was really no shortage of drama in U.S.-Mexico ties in my time there,” Landau said. “About 10 years of history got compressed into that two-year period.”

Landau noted that the USMCA and the pandemic both defined his tenure and took a moment to examine the big picture of U.S.-Mexico relations historically.

“The U.S. and Mexico basically had our backs to each other, and we weren’t looking for ways to take advantage of our geographical proximity,” Landau said.

Landau noted that we cannot overestimate the importance or impact of the North American Free Trade Agreement (NAFTA), which, he said, “for all its flaws, was a watershed” moment for U.S.-Mexico relations and changed the perception of how the two countries could work together.

“It brought the U.S. and Mexico together to be on the same team,” Landau said. “Before it felt like we were on different, rival teams. We have so much in common now – Mexico is sometimes our largest trading partner and is always in the top three, with China and Canada.”

One of the first hurdles the USMCA faced after implementation, however, was the variation in what industries were considered essential in the U.S. and Mexico. Though Landau noted that to his knowledge, no American factory was forced to close due to a lack of components from Mexico, solving the supply chain issues on a case-by-case basis was “a bit seat of the pants.”

“We have a huge back and forth of components, and we didn’t understand how integrated that was until the pandemic,” Landau said. “I very much hope one of the lessons of the pandemic is that we have some kind of constantly operating or existing working group to handle supply chains.”

Landau said the USMCA provides a framework for creating such a group to ensure essential supply chains between the two countries remain intact.

“The Mexico commercial links are absolutely critical to the U.S. economy,” he added. “These are issues that require some care.”

The Idea of North America

Zoellick’s talk on Oct. 22 focused on understanding the concept of North America in a global context.

He was introduced by GPS Dean Caroline Freund, who worked with Zoellick while they were both at the World Bank. She described Zoellick as “a huge proponent of integration in North America.”

Zoellick first shared his thoughts on the idea behind NAFTA, which he said “was much more than a trade agreement.”

“This model of integration differed from the European Union, which was based on the idea of shared sovereignty,” Zoellick said. “NAFTA encouraged mutuality, frameworks for deeper cooperation and attention to shared interests.”

Over the 25 years NAFTA operated as the governing trade agreement, Zoellick said that idea took many forms, but it was incomplete, leading to the USMCA, often referred to as NAFTA 2.0.

“The past years have been difficult for the North American ideal,” Zoellick said. “Trump wanted to kill NAFTA, but after 25 years he couldn’t. The idea and practice was too embedded in the three countries to do so, so now we have the USMCA. Some of the aspects trouble me, but there are opportunities, too.”

Zoellick stressed the importance of extending economic opportunities to Central America and said that we need “persistent, practical steps” to achieve a number of goals, such as border security and efficiency and customs policies, as well as to address ongoing issues in artificial intelligence, conservation, water, cybersecurity and more.

“But as we do so, I urge that we try to keep a strategic vision in mind, a North Star,” Zoellick said. “We should recognize North America as a continental base that will enhance our leverage globally.”

“Even before COVID, we were starting to see a shift in the nature of supply chains,” Zoellick said. “The trade system is dynamic and always evolving, but as early as 2008, we started to see a slowdown in manufacturing and saw a surge in the service industry. This has only been accelerated by COVID.”

Zoellick said there seems to be a desire to diversify the location of production facilities, with some shift to making supply chains more regional, partially driven by what he called an overreliance on China. This presents some opportunities for Mexico in North America, he noted.

Center for U.S.-Mexican Studies director Rafael Fernández de Castro thanked Zoellick for participating in the conference, calling him a “champion of North America.”

“You are always candid – and we need this dialogue,” Fernández de Castro added. “This conference is essential to what we do.”

By Virginia Watson
3 Mins read
Commencement ceremony honors graduates’ accomplishments, with an eye toward the challenges for which the school’s training has prepared them
×
Research