Ian Johnson chronicles the rise of religion in China 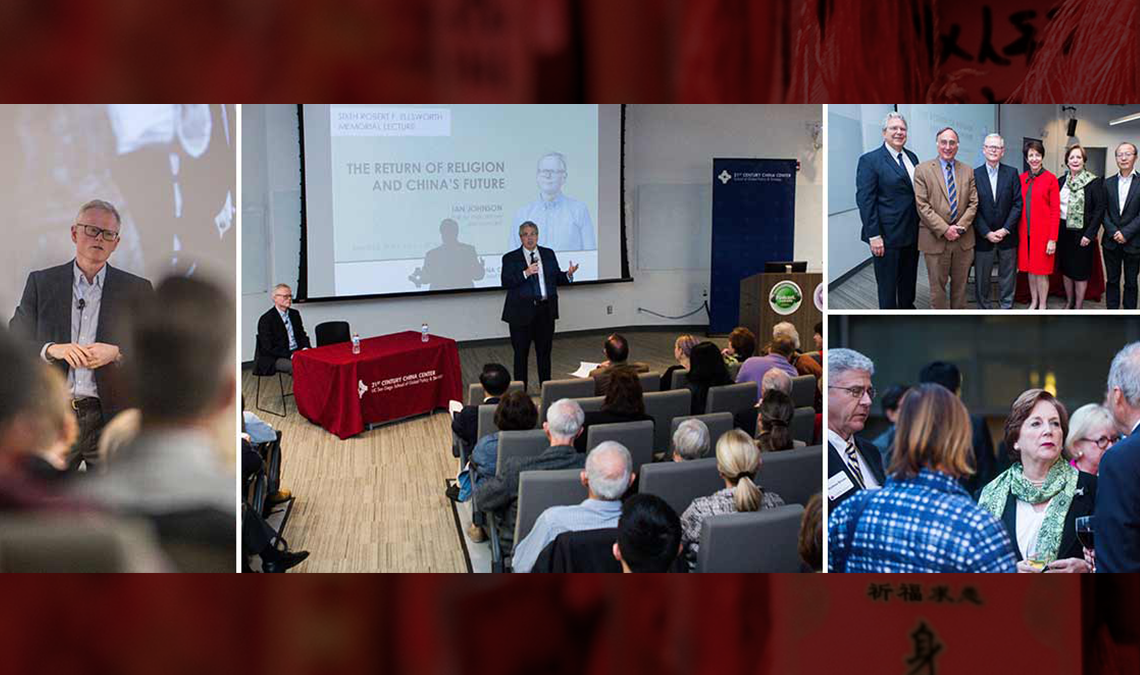 Robert F. Ellsworth was more than a diplomat, he was a lifelong scholar and believed in the vision of creating a world-class 21st Century China Center at the UC San Diego School of Global Policy and Strategy (GPS). In its sixth installment, GPS continues to honor his lasting legacy of creating dialogue surrounding U.S.-China relations today.

“At GPS, we have built the preeminent center on China in the U.S.,” said Dean Peter Cowhey. “The Robert Ellsworth Memorial lecture is a symbol of how you as a community help shape this agenda.”

Sponsored by the 21st Century China Center, the March 21 lecture welcomed to campus Ian Johnson, a Pulitzer Prize-winner whose resume includes writing for the Wall Street Journal, The New York Review of Books and The New York Times.

As part of a daylong conference to understand the changing relationship between religion and cultural development, Johnson’s evening talk mapped the sacred landscape of modern religion in China.

“This is the first time we are introducing these issues to an American audience,” said Distinguished Professor Richard Madsen. “The ‘citizenization’ of religion is a hot topic in China and Johnson presents the topic in a beautiful way that’s very comprehensive.”

Religion in China, The Rise and Fall

Introducing Johnson’s latest book, “The Souls of China” was Reverend Eleanor Ellsworth, a religious leader in our own local community. Applauding Johnson’s gifted manner of expression, the book excels at weaving contemporary and historical threads together she added.

“In his book, you really get to know the heart and soul of the people of China,” said Ellsworth. “This year’s lecture was a perfect example of excellence exploding into the intellectual arena of Chinese cultural studies.”

For more than five years, Ian Johnson traveled all around China to observe rituals that few outsiders witnessed. Living with the locals, he spent time meditating in caves in Southern China, hanging with Daoist priests in the countryside and even time in an underground church in Sichuan.

In traditional China, religion and politics were interchangeable. Johnson’s first travels to China began in 1985, just at the start of the rise of religion. For Communist leaders, if you wanted to change the political system, you had to get rid of religion.

“The government was concerned with spiritual issues. Churches were exploding, mosques were being built, religion was reviving,” said Johnson.

Temples in China were the nexus of power and therefore religion was seen as a social ill. By the end of the 20th century, the number of temples in China had been cut in half, destroyed or demolished out of fear, alongside a banning of all open practice of religion during Mao ruling.

Over the years, Johnson noticed a widespread perception of a spiritual vacuum, due in part to a lack of social trust by citizens. The government has not offered a credible alternative vision besides promoting economic progress. But in modern society, the Chinese are fighting to practice their own faith, to reclaim societal values.

While there is still governmental fear, there is a clear cultural shift towards finding purpose. Johnson addressed the Chinese desire to find a deeper meaning in life. Looking at both traditional religions of Daoism and Buddhism, as well as other religions like Christianity and Protestant, the rise began in the mid-1990s, fueled by Qigong.

“People are looking for values, they are looking for faith,” said Johnson. “Communist values are not going to be attractive or credible for most people. The Party has to offer something else.”

From growing religion in underground churches to sharing pilgrimages on social media platforms like WeChat, religion has become a part of daily Chinese life, with ready-made fellowships offering Chinese a sense of community. In an age of modernization and governmental restrictions, religion brings back the souls of China.

View photos and watch a recording of the lecture. Plus, tune into the 21st Century China Center’s China 21 podcast episode featuring Johnson.