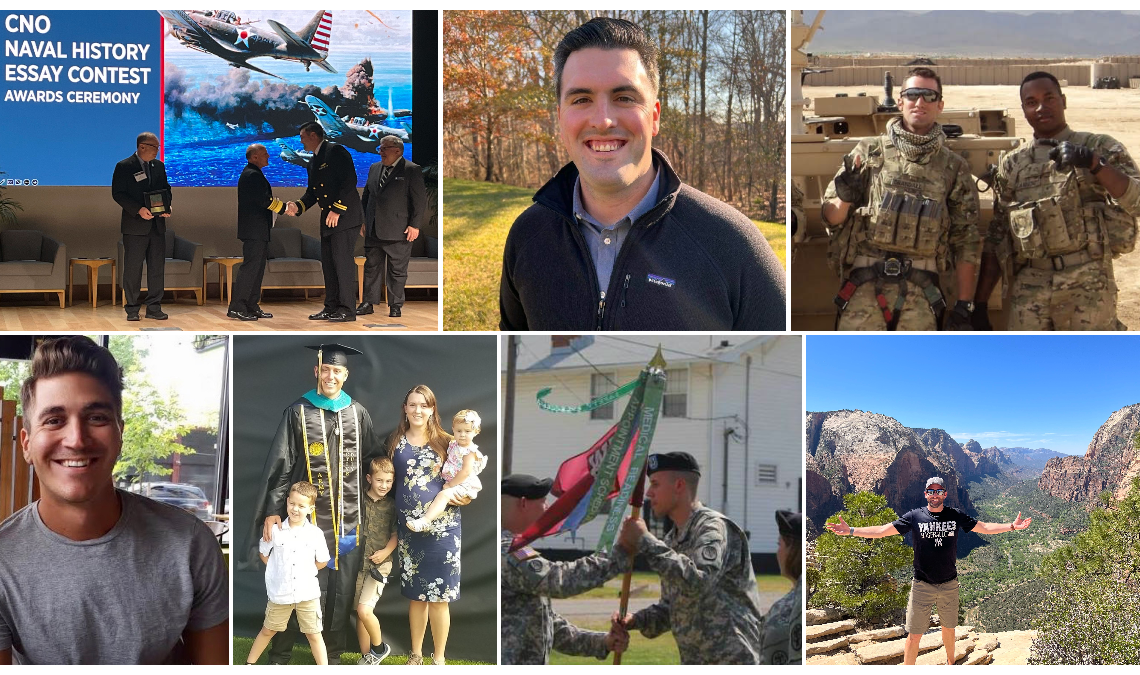 The UC San Diego School of Global Policy and Strategy (GPS) is fortunate to count a number of active duty U.S. military members and veterans among its students and alumni. These students are leaders seeking to tackle the most vexing policy problems of the 21st century — embodying the innovative spirit of both GPS and UC San Diego.

And this November, in honor of Veterans Day, we celebrate their contributions to our country and our school. GPS News caught up with a number of our military-affiliated alumni to share their stories.

Though Bryce Crandall ’19, of Lake George, New York, had a grandfather who served during the Korean War, he hadn’t considered joining the military himself until after high school.

“After a couple of years of college, I had no idea what I wanted to do with my life, so I decided to join the military for a few years until I figured it out,” Crandall said. “I actually visited San Diego about a month before I shipped out to basic training, and I fell in love with the city. I resolved to move here as soon as my enlistment was up.”

Crandall was a sergeant in the U.S. Army’s 10th Mountain Division and was deployed twice to Afghanistan. He served as an infantry squad leader and left service in 2014 after 5 years. He earned his undergraduate degree in international security and conflict resolution from San Diego State University in 2018, where his undergraduate adviser recommended GPS’ Master of Advanced Studies in International Affairs (MAS-IA) program to him.

“I thought it would be a great way to continue to pursue my passion for international affairs while working alongside like-minded peers,” Crandall said.

Crandall said that entering GPS was eye-opening for him because of the professional nature of the program, the faculty, his fellow students and the staff — and the change from undergraduate classes to graduate-level courses was “a huge shock — but in a good way.”

“The faculty were extremely knowledgeable and experienced, my peers came from professional backgrounds from around the world and the staff really worked to support us and help in any way they could,” Crandall said. “I had an early ‘wake-up’ moment in one lecture where I was amazed at the quality and depth of the discussion and realized that I was going to have to redouble my efforts if I wanted to contribute in a meaningful way. This, in turn, has helped me in my career by really driving home the lesson to never be satisfied with where you are at professionally.”

Crandall, now a sales account executive at Emburse, said one of the most rewarding contributions he has been able to make since graduation has been helping others who have found themselves in a similar situation as he was in: unsure of whether graduate school is the right choice and helping them evaluate what opportunities are available.

“For me, coming to GPS was absolutely worth it,” Crandall said. “I’ve sat on alumni panels and been to events for my B.A. program and have been able to talk to a number of students and recent grads who just wanted advice or to hear about my experience. To pay it forward to the next cohort doesn’t seem like much, but that’s how institutions and networks grow.”

Kyle Cregge ’22, an active duty Navy lieutenant and native of Alpharetta, Georgia, comes from an extended military family, including aunts, uncles, cousins and grandparents who served. So the decision to join the Navy was a natural fit.

Cregge graduated from the U.S. Naval Academy in 2015 and has been all over the world: he has been stationed on ships in Pearl Harbor, Hawaii, and San Diego and been deployed to the Arabian Gulf and the Western Pacific. He has also earned accolades during his naval career: he was selected for the 2019 Junior Officer Award for Excellence in Tactics by Carrier Strike Group 9.

While stationed on a ship in San Diego, Cregge began exploring graduate education opportunities in his backyard. And in his research, he found information about GPS’ Master of Public Policy (MPP) degree.

“The biggest reason I came to GPS was to get a high-quality education without having to move or having to come off my second ship during the COVID-19 pandemic,” Cregge said.

Cregge’s time at GPS gave him the space for self-study and targeted research on particular topics, especially U.S.-China-Taiwan history and relations.

“This has been especially valuable to me as I think about the potential for conflict over Taiwan and articulating that risk and its implications to my sailors,” Cregge said.

Cregge recently placed third in the CNO Naval History Essay Contest for his article titled “Avoiding ABDACOM’s Annihilation: Lessons for Today from 1942” — a piece he originally wrote for Vice Admiral Robert L. Thomas Jr.’s class — which will be published next year in an issue of the Naval Institute’s Naval History magazine.

“Admiral Thomas and Captain Scott Tait both were great mentors and incredibly formative for my time at GPS,” Cregge said.

Cregge also continues to write for the U.S. Naval Institute, the Center for International Maritime Security (CIMSEC) and War on the Rocks. He counts himself lucky for his experiences at both GPS and in the Navy.

“The most rewarding part of my career has been traveling the world and being a part of really talented teams of sailors who deeply care about our success,” Cregge added.

Antonino “Neno” Davi ’19, of Thousand Oaks, California, spent six years in the U.S. Navy as an intelligence analyst from 2009 to 2015. He completed two deployments on the USS Enterprise in the Arabian Gulf supporting Operation Enduring Freedom and then worked in Washington, D.C., at various intelligence agencies supporting war fighters until separating from the Navy in 2015.

“Being able to work with many different countries and traveling to a lot of them got me really interested in international affairs,” Davi said. “In my last two years in the Navy, I was working out of the Pentagon in the attache affairs support office, so I was working directly with a bunch of U.S. embassies.”

Davi then moved to San Diego and began researching graduate programs that would fit his background of working in defense and learned about the MAS-IA program.

“My sister went to UC San Diego and one of my best friends studied bioengineering here, so I already knew about the school,” Davi said. “Then I learned who would be teaching me — the caliber of instructors at GPS is top notch — so I knew that degree program would be a good fit.”

Davi highlighted courses he took with Joshua Graff Zivin, Stephan Haggard and Elizabeth Lyons, as standouts during his tenure at GPS, though he noted that every course helped him gain skills that have aided him professionally.

“The biggest takeaway for me was the strategy behind every class — I was already doing that in my job as a project manager, but what I learned in class helped me get to the next level,” Davi said. “To advance my career I had to have more strategic thinking and find a way to influence everyone without being their boss, and I learned so much about influencing organizations, groups and teams. After graduating, I got a huge promotion to a program manager with a global organization and was responsible for running their California office, and I think that promotion was a direct result of a lot of the stuff I learned in class.”

Joshua Woodaz ’21, of Kalamazoo, Michigan, grew up with stories of his grandfather’s service in the military, as a medic in World War II.

“He walked the streets of Japan after the bombings of Hiroshima and Nagasaki,” Woodaz explained.

But most of Woodaz’ inspiration for joining the service himself was from his older sister, who enlisted in the Navy in 2007.

“After graduating from high school, I wanted to see different parts of the world, and so I headed north to Alaska,” Woodaz said. “There, I was involved in the university’s Reserve Officer Training Program, where I earned my commission as a second lieutenant in 2011.”

After earning his bachelor’s degree in Spanish from the University of Alaska Fairbanks, his first duty station was in Ft. Campbell, Kentucky, from 2011 to 2016, where he was the human resources officer for a field artillery battalion as part of the 101st Airborne Division.

In fall 2012, he was deployed to Afghanistan in support of Operation Enduring Freedom, where his unit was partnered with a unit in the Afghan National Army.

After leaving the field artillery unit, he served as a company executive officer and then as company commander at Ft. Campbell’s Warrior Transition Battalion, now called the Soldier Recovery Unit.

“The Warrior Transition Battalion helped soldiers with severe wounds, illnesses and injuries either go through the healing process so they can return to their normal unit or help them go through the medical separation process and prepare for civilian life,” Woodaz said. “I saw a lot of heartbreaking things there. Several soldiers who came to our unit had cancer or other serious diagnoses, and many soldiers had several behavioral health diagnoses. It presented a different sort of leadership challenge.”

In 2017, Woodaz was assigned as the human resources officer to an infantry battalion at Ft. Polk, Louisiana, as a part of the 10th Mountain Division.

“My unit deployed to Iraq in the fall of 2017 in support of Operation Inherent Resolve, which was the fight against ISIS in Iraq and Syria,” Woodaz said. “We went over right after Mosul fell in the summer of 2017. That assignment was my last one before starting at GPS in the late summer of 2019.”

Woodaz, who was accepted to the Advanced Civil Schooling program, said UC San Diego had always caught his attention.

“My family and I were interested in going back to the West Coast, for starters,” Woodaz said. “I loved GPS’s focus on the Pacific, and I also loved how their MPP program involved many international affairs courses. GPS also seemed devoted to quantitative rigor, which is something that really interested me.”

Once Woodaz heard back from the graduate schools to which he applied, he spoke with one of his mentors about which program would be best, and out of several prestigious schools, his mentor recommended UC San Diego as the best choice.

“GPS was the right educational choice for me, and I experience that reality every day,” Woodaz said. “I’m especially grateful for the quantitative expertise and rigor, which includes using STATA, R, QGIS, and Google Earth Engine. The political science courses I took are also tools that I use regularly in my current position.”

“I loved my time at GPS, and I couldn’t imagine a better graduate school experience,” Woodaz added.

Learn more about the programs available at UC San Diego for veterans and active military members, including the Student Veterans Support Center.