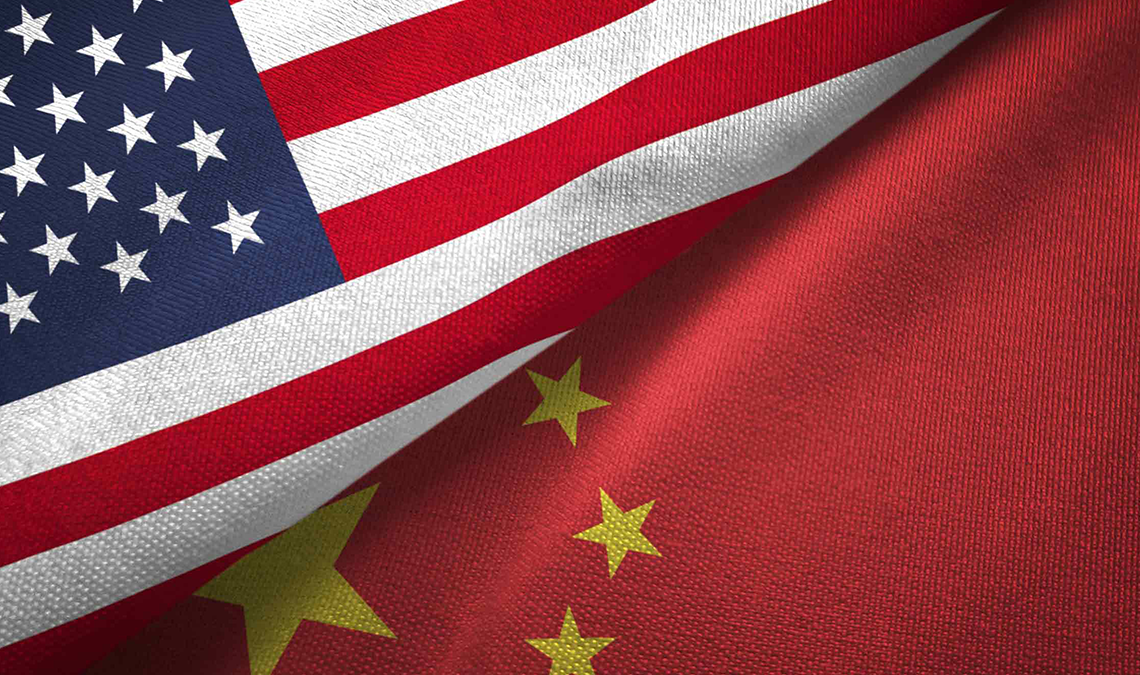 The novel coronavirus has put the world in the midst of a once-in-a-century global health pandemic. In our increasingly globalized society, SARS-CoV-2 has crossed borders at a rapid pace, endangering the lives and livelihoods of billions. In modern history, the world’s nations have never collectively been so vulnerable to a common threat. And according to UC San Diego experts, no effort—whether to save American lives at home or combat the disease abroad—will be successful without some degree of cooperation between the two global superpowers, the United States and China.

“If the U.S. and China can show the world that they can put aside their secondary disputes and actively coordinate their response to the pandemic, they will be able to mobilize a global containment and eradication strategy,” said Susan Shirk, chair of the 21st Century China Center at the UC San Diego School of Global Policy and Strategy. “Our government authorities can work together and provide hope to everyone that we will eventually eliminate this disease.”

Many high-level former government officials and experts on the U.S.-China relationship agree. Together, more than 90 such officials released a joint statement last week, organized by the UC San Diego 21stCentury China Center and the Center on U.S.-China Relations of the Asia Society, urging cooperation between the U. S. and China to combat the pandemic. The statement, signed by Shirk and Chancellor Pradeep K. Khosla among others, underscores how a massive international effort is required to develop and distribute tests, treatments and vaccines for the world’s seven billion people.

Hostile relations between Washington, D.C. and Beijing when lives are on the line

The statement comes after months in which a war of words has been exchanged between the political officials of each country. Both governments have been pointing fingers at each other in the press, appearing to heighten the U.S.-China tension. Yet, the stakes are too high for such disputes.

“China has a huge surplus of supplies because they really ramped up during the height of their epidemic and now both the U.S. and China are making it difficult for that equipment to be shipped to New York City and other places where there’s a dire need for it,” Shirk added.

Webinar series on the Global Impacts of COVID‑19

On April 9 at noon, Susan Shirk and Victor Shih will be part of a panel discussion on U.S.-China tensions for the School of Global Policy and Strategy webinar series on the Global Impacts of COVID-19. Visit the event website for more information and to register.

On April 16 at noon, Stephan Haggard and colleagues will discuss how Japan, India and other Asian countries outside of China are responding. Visit the event website for more information and to register.

Barry Naughton, the So Kwan Lok Chair of Chinese International Affairs at the School of Global Policy and Strategy (GPS), has even stronger words to describe the current situation.

“To us as ordinary people, it’s disgusting to see these two governments respond in this way,” he said. “Each country perceives the other being worse, or the initiator of the disease and it has already caused relations to deteriorate.”

He added, “A weird quid pro quo, or tit for tat, has crept into every aspect of the relationship. For example, China is currently using its ability to supply certain types of medical equipment to reward countries, like Hungary, that comply with China’s narrative and its position internationally. While, until recently, U.S. officials repeatedly referred to SARS-CoV-2 as the ‘Chinese or Wuhan virus.’”

Naughton and colleagues agree that China made mistakes from the beginning. However, the work from Chinese scientists, pivotal to the global containment efforts, cannot be overlooked. And, after its initial missteps, the Chinese government has deployed its controls over the society and economy to stop the spread of the virus.

Giving credit where credit is due in the Asia Pacific

“The public health establishment in China has grown significantly in the last decade,” Naughton said. “Starting with the doctor, Li Wenliang, who sounded the alarm and got in trouble for it, to the Chinese doctors who sequenced the virus and put it online very early, there’s been a steady stream of high quality scientific work out of China about the virus.”

Victor Shih, the Ho Miu Lam Chair in China and Pacific Relations at GPS added that the past rhetoric from the White House “blaming” China for the international catastrophe is without merit on a number of levels.

“People don’t realize that China is very global,” Shih said. “Most epidemiologists agree that because the epidemic started in October and it was December by the time health care workers noticed the virus when many individuals in Wuhan had already travelled out of the country carrying the disease. That was something countries could not have prevented.”

Many neighboring countries to China launched successful responses to the pandemic early on.

Stephan Haggard, the Lawrence and Sallye Krause Professor of Korea-Pacific Studies at GPS is impressed by South Korea’s efforts to slow the spread of the epidemic while avoiding blanket lock-ins. Early on, the country established an expansive and well-organized testing program combined with extensive efforts to isolate infected people and trace and quarantine their contacts.

Taiwan has been one of the best performers as well. “They haven’t gotten the credit they deserve,” Haggard said. “However, they quickly became the gold standard for matching travel and health records, permitting laser-like focus on the most likely cases.”

On the evening of Dec. 31, 2019, Taiwan decided to begin health inspections for all passengers arriving on flights from Wuhan, in spite of reassurances from both Chinese and World Health Organization authorities. Thus far, the island has only reported 379 positive diagnoses and five deaths.

The fact that the virus affected countries in Asia first should have been a learning lesson to others, especially the U.S., according to both Haggard and Naughton.

Shih added that the China experience showed that governments needed to be completely transparent about the virus from the outset.

Haggard still worries that Japan let its guard down and that with less testing, cases could be underestimated. Yet his concerns for the U.S. are more serious still.

“There is a natural tendency to think that shocks of this sort will self-correct,” said Haggard. “But publics in the U.S. have not grasped the magnitude of the risks, in part because of the nature of exponential growth. In the early phases of the pandemic, it did not look like we were adding that many cases. But by the time we got to 1,000 cases, the growth rate of new cases was running as high as 20 percent a day and even higher in hotspots. At these growth rates, you are at 250,000 cases in a month, but three-and-a-half million in six weeks, unless countervailing measures are taken.”

While the U.S. must address its own shortcomings, it also should simultaneously work with the international community to address the global coronavirus threat. Haggard is particularly worried about the consequences for developing countries in Africa, Latin America and other parts of Asia that do not have the public health systems to manage the crisis.

Working together even as competitors

Shirk points out that historically, major powers managed to cooperate on the common threats of epidemics and pandemics.

“In 1966, the Soviet Union and the U.S. joined together with other countries to eradicate smallpox from the globe and they achieved it, at the height of the cold war,” she said. “We are going to have to do what we did for smallpox, which is to try to vaccinate everybody in the world. It is going to be very costly. It probably should be implemented around the world through an organization like the G-20 or WHO.”

Shirk added that further cooperation between medical communities is also required. “China’s doctors have very important clinical experience in taking care of patients with the coronavirus and our doctors need to learn from that, and vice versa.”

And, as China appears to be past its peak of infections and is currently sending more people back to work, other countries can learn from such protocols, said Naughton.

“There are two very clear lessons we should learn from: first, across-the-board social distancing, which we are not doing yet in the U.S., and second, using information systems to actively facilitate the process of people coming back to work,” he said. “You do not have to be authoritarian to monitor people’s health as they go back to work.”

While China is the first major country to appear to get the virus under control, the problem is not over yet.

An interdependent economy may provide signs of hope for cooperation

China’s economy is showing signs of recovery; however, only so much growth is possible as many of the world’s markets come to a crippling standstill.

“China is largely an export economy and is severely impacted by the coronavirus,” said Shih. “If there is a silver lining, it will be that China will learn how dependent it is on the rest of the world.”

And while many speculate on the possibility of China’s forceful response to the virus enabling it to eventually edge out the U.S. as the world’s super power, international investments say otherwise.

“One indicator that the U.S. is still the dominant super power in the world, is that in recent days when investors saw that economic growth in the world was going to decline, they did not seek out Chinese assets. The U.S. dollar still reigns supreme,” Shih said. “It suggests that the status of the U.S. has not changed at all and has been actually reinforced.”

Naughton concurs, highlighting that that the Federal Reserve Board has been aggressive and proactive in providing U.S. dollars to other central banks to help stabilize the global economy, reinforcing U.S. leadership.

With financial consequences interlinked between the two countries, neither the U.S. nor Chinese economy is going to recover completely without the other.

The financial consequences of the spread of COVID-19 are taking a toll on millions around the world. Just in the month of March, more than 10 million Americans filed for unemployment and economists predict the real number to be higher as claims keep coming in.

“The crisis is going to trigger policy discussions about both our healthcare and social insurance systems,” Haggard said. “We are allowing companies to lay off workers and then compensating them through complicated lending schemes and the unemployment system. There are much more efficient ways to cushion risk than allowing firms to fail and workers to join the unemployment lines.”

While the economic outcomes of strict social distancing measures remain to be seen, we have reasons to believe collaboration with China is possible in the global effort to contain the novel coronavirus.

“The guidance that the Chinese government recently gave to Chinese students in the U.S. is pretty fair,” Naughton said. “It says essentially ‘most of you shouldn’t come home because even though the initial steps have been clumsy, the U.S. has strong science. It’s got strong civil society and local governments are now beginning to respond’…That shows there is a community within China that understands the enormous breadth for potential cooperation. I think there will be scope for deeper communication between the public health communities from both countries.”

Studying the intersection of gender diversity and political violence