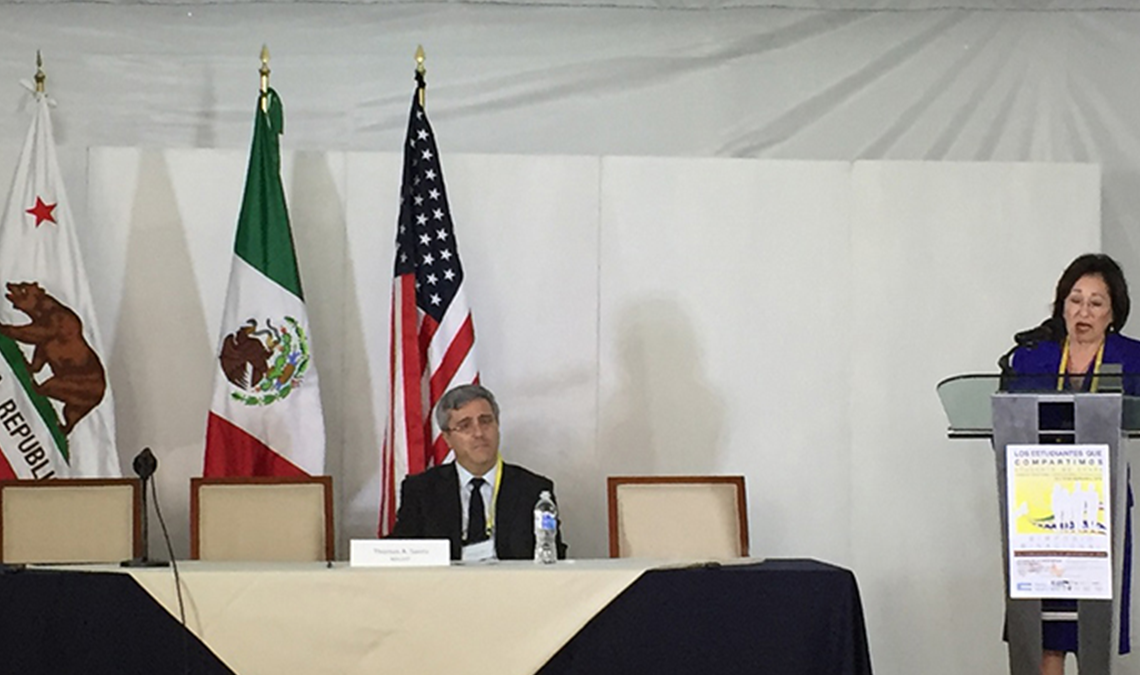 From left, keynote speaker Thomas A. Saenez, president of the Mexican American Legal Defense and Educational Fund, with Patricia Gandara of UCLA opening day of “The Students We Share.” Photo courtesy of the Center for U.S.-Mexican Studies
PDFPrint

University of California Mexico Initiative symposium examines educational experiences of students who attend school on both sides of the border, seeks solutions to improve learning opportunities

The United States and Mexico share hundreds of thousands of students, but their educational needs too often go unmet and their potential is imperiled because of poor communication, bureaucratic challenges, language barriers and inadequate and unequal educational opportunities on both sides of the border, said educational researchers from both countries.

Research presented Sept. 12-13 in Mexico City at “The Students We Share/Los Estudiantes que Compartimos,” a bi-national symposium exploring new research findings on the experiences of students who attend school on both sides of the border, show that more than 400,000 U.S.-born school-age children and their families are currently trying to find their way in Mexican schools.

Additionally, students who return to Mexico and fail to enroll in school are not counted in these numbers but constitute a highly vulnerable group. Another 700,000 Mexican children in the U.S., as well as millions of U.S.-citizen children of Mexican parents, share parallel struggles in the U.S. 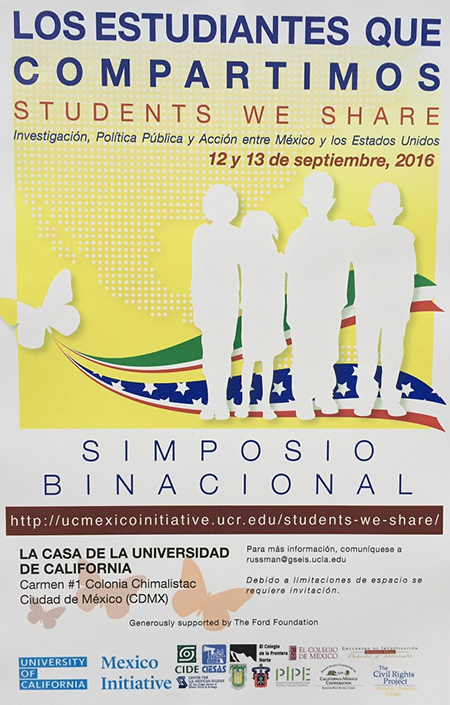 “These students — bright, bilingual and bicultural — represent a tremendous asset for both of our countries, but too often they are caught in an educational no-man’s land where the struggles of school systems to communicate, needless bureaucratic requirements and language barriers undermine learning opportunities,” said Patricia Gandara, chair of the UC-Mexico Initiative Education Working Group and co-director of the Civil Rights Project at UCLA. “We need to work together to understand the issues confronting students and schools and improve learning opportunities in both countries.”

Presentations from the Center for U.S.-Mexican Studies (USMEX) at UC San Diego’s School of Global Policy and Strategy included research conducted through the Mexico Migration Field Research Project. USMEX interim director Melissa Floca discussed the educational performance of students in the municipality of Tijuana and Sweetwater Union High School District, finding that 90 percent of these students have ties to each country. These students have big aspirations for their futures, Floca said, however they face important barriers to their success.

Working with USMEX, Ana Barbara Mungaray of the Universidad Autonoma de Baja California (UABC) presented a discussion on the socioeconomic conditions the same border students, taking into account the employment status of their parents, access to resources relevant to education, and physical and emotional health. These elements, she said, are relevant for understanding the problems related to the educational performance of young bi-national students and their transition to adulthood.

“The lack of coherent policy and communication is resulting in a massive loss of human talent, a loss of the very young people who could serve as bridges between the two nations and throughout the hemisphere,” said Max Matus, a researcher at El Colegio de la Frontera Norte (COLEF) in Tijuana and co-coordinator of the symposium with Gandara.

The symposium is a project of the University of California Mexico Initiative and highlights a partnership between UC San Diego, COLEF, UCLA and UC Riverside. Seven Mexican institutions of higher education in Mexico served as co-conveners, including CIDE, CIESAS, COLMEX, Instituto Mora, PIPE, UABC and UdeG. The Institute for Mexicans Abroad (IME) of the Secretary of Foreign Relations (SRE) and the U.S. Embassy are also participating.

Symposium organizers contend not enough attention has been focused on the impact of incoherent immigration policies and almost totally uncoordinated education policies that impact large numbers of students whose lives and education are divided by a border that separates not only families but different phases of young people’s education. Researchers and policymakers gathered at the symposium to study the issues and develop public policy options for optimizing the educational and workforce development of Mexican-origin students in the United States and Mexico.

Among the finding presented at the symposium:

“Our research makes clear that on both sides of the border, Mexican and Mexican-origin students are not attaining the level of education they need for success and mobility in our societies,” said Gary Orfield, co-director of the Civil Rights Project at UCLA and contributor to the research findings. “We need to do better.”

“The Students We Share/Los Estudiantes que Compartimos,” was made possible by a grant from the UC-Mexico Initiative at the University of California as well as grants from several Mexico-based universities and the Ford Foundation. Leading researchers from many universities in both countries prepared research papers and presentations in sessions where they faced other scholars and officials discussing the implications and possible solutions.