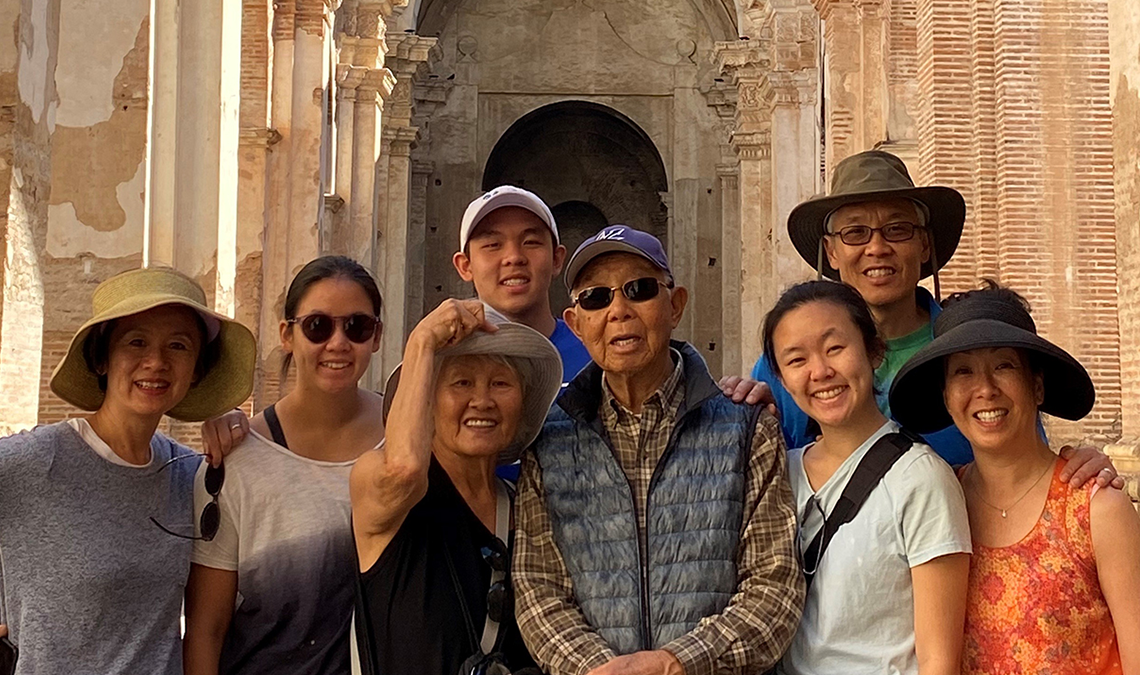 Gift will recognize and honor Marion and Kwan So

Beloved family traditions come in all shapes and sizes. For the So Family, the treasured tradition that has been passed down from one generation to the next is the act of giving back to the community. In continuing their family’s philanthropic legacy, Annie and John So—the children of two loyal and long-time supporters of UC San Diego and its School of Global Policy and Strategy (GPS)—have recently made a generous gift to UC San Diego to recognize and honor their parents Marion and Kwan So. Kwan So is a Trustee Emeritus of the UC San Diego Foundation and GPS founding International Advisory Board member. Both Marion and Kwan So are founding members of the GPS 21st Century China Center.

Inspired by their family’s commitment to building UC San Diego into a global leader in research, education and dialogue on contemporary China, Annie and John So intend the gift to benefit the GPS 21st Century China Center. The contribution will fund support for the So Family Executive Directorship, and visiting China experts as 21st Century China Center Fellows.

“Since its founding more than three decades ago, the School of Global Policy and Strategy has evolved to become an epicenter of research and understanding for U.S.-China relations, and the support from the So family has been critical to this endeavor,” said Peter Cowhey, dean of GPS. “This gift from Annie and John So is testament to the visionary leadership the So family have demonstrated over the years and with this gift, our school can continue its legacy of excellence.”

John So shared, “Our family’s dedication to philanthropy began with our maternal grandfather in Hong Kong, who was forced to work at a very young age but was blessed with an incredibly strong work ethic. While he was able to find success as a banker and businessman, he ultimately felt that something was missing. He made the decision to focus on giving back to educational institutions both in Hong Kong and overseas, which set the framework for our family.”

“It’s so gratifying that Annie and John are just as committed to the vision of a world-class center for research, education and dialogue on contemporary China as their parents have been for many years,” said Shirk. “Their support enables us to carry out cutting-edge research, expand our dialogue with Chinese experts and share what we learn with the public and policy makers in the two countries. Stabilizing the U.S.-China relationship to preserve opportunities for cooperation on public health, climate and other common challenges has never been as essential as it is today.”

Marion and Kwan So made their first gift to support UC San Diego in 1975, beginning their philanthropic journey with a humble $7 donation to the Chinese Student Emergency Loan. More than four decades later, their charitable contributions have helped to transform the School of Global Policy and Strategy into a major center for the study of China in the U.S. Their efforts established student scholarships, lectureships and endowed faculty chairs in Chinese studies. Annie and John’s donation continues their parent’s legacy of strengthening academic research and education on contemporary China. It is also a response to the changed dynamic of U.S.-China relations.

Annie So remarked, “In the early 90s, what drew my dad to supporting the Graduate School of International Relations and Pacific Studies (now the School of Global Policy and Strategy) was a desire to share the U.S.’s wealth of knowledge with a modernizing China. It was a time when China was still a developing country, and he wanted to help foster a connection between China and UC San Diego.”

Fast forward thirty years later, the So’s children acknowledge that both the U.S. and China now are global powers in a relationship that mixes competition with cooperation. “We hope our gift will help the 21st Century China Center remain an important hub for scholarship on China, representing expertise in topics ranging from politics and foreign policy, to culture and social issues. We also want the center to foster dialogues so as to continue bilateral exchanges of ideas between people in China and the United States,” said Annie So.

Enjoying one of the highest concentrations of academic experts on contemporary China in the country, the center has also become a leading think-tank for policy research, education and outreach on China and U.S.-China relations.

The center’s research, education and policy-oriented work have never been more critical, because cooperation between the United States and China is crucial to combatting common threats such as the COVID-19 global health crisis.

For the So family, the visibility of strong, well-respected academics—such as Susan Shirk, Barry Naughton, Victor Shih and others—is a fundamental component of the center’s leading role in understanding and shaping U.S.-China relations.

“Part of our gift serves to enhance this visibility—when people think about UC San Diego, they think about its impactful China center, the great research that is being done there and the dialogue that it has fostered between the students, the academics, the faculty and the community,” added Annie So.

As a current resident of Hong Kong, John So understands firsthand the importance of objective, unbiased research to deepen the knowledge and discourse between the U.S. and China. When he and his sister were first determining how to direct their gift, John reflected on the staunch objectivity the center scholars have when discussing China, given the political climate in both countries.

“I was really impressed with the critical questions that the center raised. It’s important to have organizations such as the 21st Century China Center to go deeper into the details, uncover as much as possible and provide deeper insights as to why things are occurring,” said John So.

Ultimately, following in the footsteps of their parents, Annie and John are driven by the fervent belief in the importance of the work that UC San Diego does. Through the So family’s philanthropy, the 21st Century China Center can continue positively impacting U.S. China relations and expanding U.S. knowledge about China. “By giving to an educational institution, we support an enterprise that can open new doors and change lives,” said John So. “Our donation is also about giving back to the community and being an example for the next generation.”

By Virginia Watson
5 Mins read
Jay and Lisa Hanson, both graduates and longtime supporters of GPS, named this year’s outstanding alumni for their continued contributions to the school
×
FacultyPhilanthropyResearch