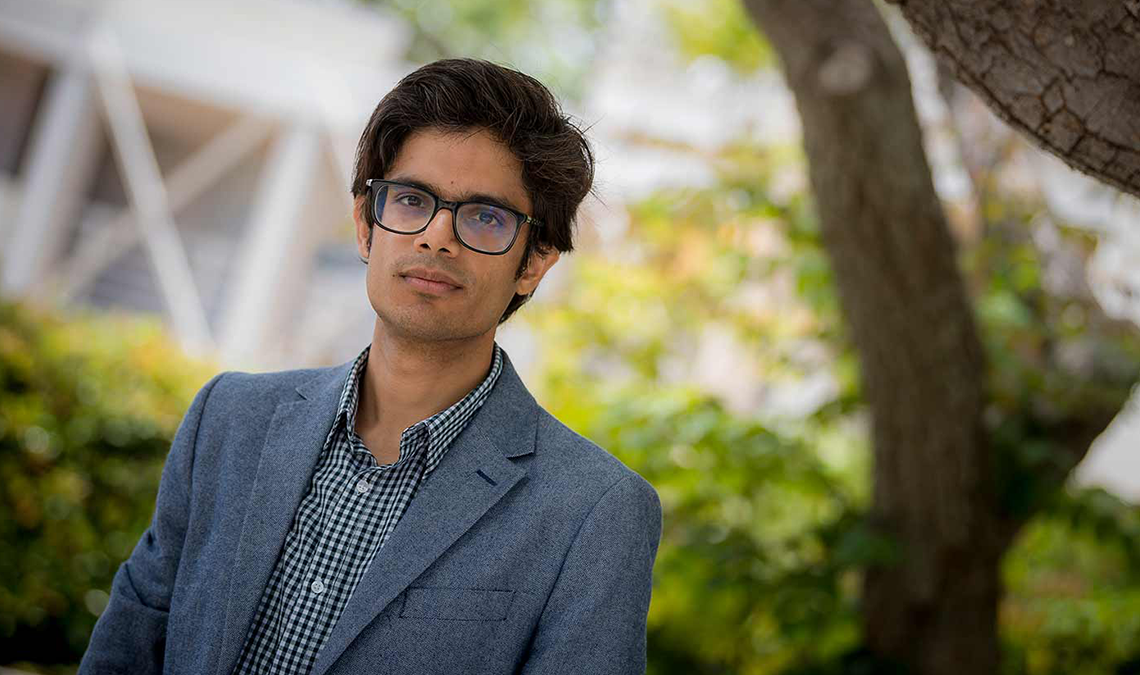 What should the U.S. immigration policy be? How does international student enrollment impact domestic students? Does an immigrant workforce truly increase innovation?

As a member of many international communities, Gaurav Khanna, professor of economics at the UC San Diego School of Global Policy and Strategy (GPS), seeks answers to many of the pressing policy-relevant questions around immigration, high-tech workers, education programs and more.

Born in India to a mother who is a journalist and a father who is an economist, Khanna grew up overhearing conversations about how government intervention impacts the economy. This shaped his interest in exploring socio-political issues in depth. Through his current research projects, Khanna has uncovered findings that may be surprising to some, and can yield more effective policy decisions if heeded.

One of his recent research papers revealed how H-1B visas positively impacted both the U.S. and Indian workforce and productivity; another revealed how international students have aided in-state students during a period when public universities have faced deep state budgets.

Naturally, GPS has been a great fit for Khanna, who joined UC San Diego’s faculty in 2017.

“Khanna is a great example of how our faculty at the school conduct research to design public policy that offers solutions for global societies in the 21st century,” said GPS Dean Peter F. Cowhey. “Through rigorous scholarship and analytics with practical applications, our experts develop best practices for policymaking in the U.S., Latin America, Asia and beyond.”

Khanna says many of his research interests have been shaped by personal experiences. After earning his undergraduate degree at Delhi University, he studied economics at the University of Oxford where he earned his master’s degree. After working as a consultant for the World Bank’s Poverty and Inequality Unit in Washington, D.C., he completed doctoral work at the University of Michigan.

“All of my university experience has been at public colleges which also have large numbers of international students,” he said. “It’s always intrigued me how public schools have managed enrollment, as state funding has dropped precipitously in recent decades.”

In a National Bureau of Economic Research working paper, Khanna and co-authors from the University of Michigan, the University of Virginia, and the Urban Institute outline how substantial declines in state support have forced public universities to choose between increasing tuition levels and cutting expenditures –such as decreasing academic offerings, or enrolling a greater proportion of students who pay out-of-state tuition.

Many public U.S. colleges, including the University of California, turned to international student tuition, rather than sharply increasing the tuition of in-state students in order to make up for shortfalls in state funding, as noted in the paper.

“For the period between 1996 and 2012, we estimate that a 10 percent reduction in state appropriations is associated with an increase in foreign enrollment of 12 percent at public research universities and about 17 percent at the most resource-intensive public universities.”

The authors added that the cuts could have been far more damaging had universities not taken this approach.

“In the absence of the pool of foreign students, many universities would have faced larger cuts to expenditures and potentially greater increases in in-state tuition charges,” they wrote.

Public colleges, most notably the University of California, including UC San Diego, enroll a higher rate of low-income students, so maintaining their affordability is key to their ability to advance their mission of providing upward social mobility for students across the state and country.

Putting together the H-1B puzzle

Khanna has also shed new light on the economic impact of the H-1B visa program, a topic that has generated copious headlines recently in the United States and abroad. H-1B is a visa that allows U.S. employers to employ foreign workers in specialty occupations. These high-skilled immigrants must possess a bachelor’s degree or equivalent. The duration of stay is three years, extendable to six years. Khanna co-authored a working paper published by the Center for Global Development that looked at how the visas have impacted the IT sectors in both the United States and India.

The results revealed the H-1B program led to a tech boom in both countries, “inducing substantial gains in firm productivity and consumer welfare in both the United States and India,” Khanna and his co-author from the University of Michigan, Nicolas Morales, wrote.

“When foreign born workers are coming to the U.S. to work in the tech sector, on average productivity here goes up. This means people across industries—bankers, car manufacturers, etc.—are using better software, and all the work we are doing is faster,” he said, noting the downstream effects of tech investments.

Khanna and fellow researchers found that the U.S.-born workers gained $431 million in 2010 as a result of the H-1B program. In India, the H-1B program induced workers to switch to computer science occupations, increasing the workforce and raising overall IT output in India by 5 percent.

This shift was mirrored in Khanna’s personal experiences in India, where he saw his friends studying engineering in hopes of securing a tech job in Silicon Valley.

Khanna is also interested in increasing the body of knowledge linking resources and conflict. Another National Bureau of Economic Research working paper he co-authored examined conflicts and resources, such as diamonds, in Africa.

Though rich in natural resources, sub-Saharan Africa is home to some of the least prosperous countries in the world. The paper provides evidence that the same natural resources that can catalyze rapid economic growth can also contribute to a vicious cycle of conflict and underdevelopment.

“For instance, diamonds in Sierra Leone, Angola and the Ivory Coast both fuel and fund territorial conflicts,” the authors wrote. “Locations with a great abundance of resources may indeed be witness to severely destructive activities, stalling any gains toward prosperity.”

The authors also propose solutions to this issue by examining what helps break this cycle between resources and conflict. Better institutions, such as stronger property rights and lower risk of expropriation, ameliorate the effects of resources on conflict.

Blood diamonds and investments in education may not seem to go hand-in-hand, but Khanna has studied both. In India, he’s done extensive work on how investment in education has led to an economic revolution in many rural parts of the country. Moving forward, he hopes to blaze new trails by further studying the impacts of immigration.

“One current project I am working on is looking at when people from all parts of the world come together to work, what does that mean for innovation,” he said. “We’re finding that immigrants don’t just bring skills, they bring ideas that lead to exciting developments in industry.”

For more information on Khanna and his research projects, click here.