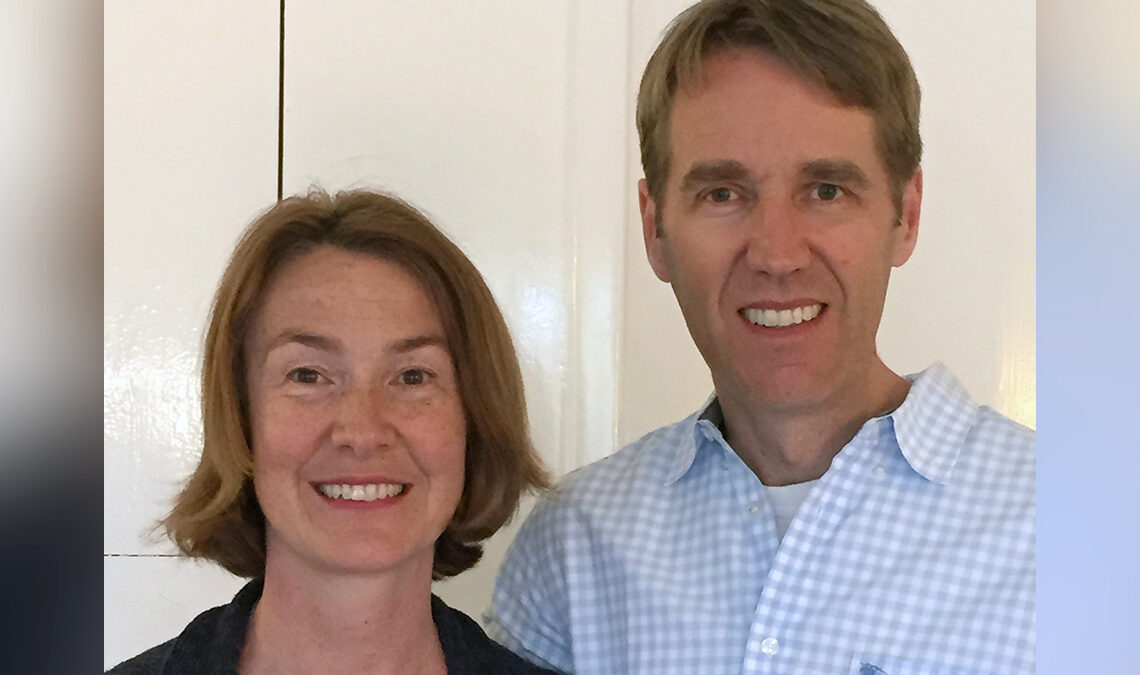 Jay and Lisa Hanson, both graduates and longtime supporters of GPS, named this year’s outstanding alumni for their continued contributions to the school

Jay and Lisa Hanson think often about the series of events that shaped the trajectory of their lives: deciding to attend the UC San Diego School of Global Policy and Strategy (GPS), and meaningful careers that led them to places like New York, the Bay Area and Berlin.

But no matter the level of professional success the Hansons achieved, they always worked to give back to the school they felt gave them their start. Their ongoing dedication to GPS led the alumni selection committee to name the Hansons as the GPS Outstanding Alumni for 2021.

“I am incredibly humbled to win this award along with my amazing wife, Lisa,” Jay said during a virtual alumni event held Oct. 23 as part of UC San Diego Homecoming. “I recently looked through the list of people who have won this award before, and they are literally saving the world,” noting that he felt doubly honored that he and Lisa would be considered to be counted among the awardees.

“Our time at GPS greatly influenced who we are today, and we are so happy to continue to be involved with the school,” Lisa added.

Jason Kim ’12, who emceed the alumni homecoming event, said the Hansons have provided “steadfast support of GPS and its students.”

“Despite their busy work and family obligations, they continue to give back to their communities by serving as advisers and board members and volunteering,” Kim said. “They’ve spoken on GPS career panels, coordinated alumni gatherings and salon events, provided individual mentoring and have even spoken to prospective students to encourage them to apply to GPS.”

In the Hansons’ award nomination, it was noted that the Hansons have given back to the school since graduation in the form of time, talent and gifts, facilitating summer internships for students, volunteering to speak on panels, and encouraging fellow alumni to reconnect with the school in meaningful ways.

“Their commitment to the long-term success of the school and engagement with the school and alumni community are an inspiration for other alumni to follow,” the nomination read.

In 2015, the Hansons gave $250,000 to establish the Hanson Sterner Fellowship Fund, an endowed fund that benefits graduate students at GPS. At the time, the donation was the largest alumni gift in the school’s history. Jay said he and Lisa not only saw the fellowship gift as an opportunity to pay it forward but also as an investment in the future.

“Both of us benefited from financial support that enabled us to attend GPS,” Jay said. “More importantly, we saw the importance of a school like GPS in today’s day and age, where GPS is creating multidisciplinary leaders to solve the challenges we’re facing, from climate change to technological advancements to income disparity to political polarization.”

Giving back to where it all began

Jay, a Minnesota native, and Lisa, who grew up on the East Coast, met at GPS  – then the School of International Relations and Pacific Studies (IR/PS).

“I was drawn to GPS because of its focus on international politics and economics and its dedication to the Pacific Rim,” Lisa said. “I had studied these topics in undergrad and, after a few years of relevant work experience, felt I needed to pursue a master’s in order to advance my career.”

Jay said his favorite undergraduate professor told him about IR/PS, which was still just a fledgling school at the time.

“Then I saw a photo of La Jolla and decided,” Jay added, laughing.

After graduating from the school, Lisa worked in corporate finance, where she originated, structured, negotiated and executed loan and lease transactions for early stage through Fortune 500 companies.

“During that time, I led new business development efforts in Mexico as well as cultivated potential investment partners in Europe,” Lisa said.

At that time, Jay worked for Accenture, formerly Andersen Consulting, doing internet software technology projects around the U.S., with some work in Asia. After working on a project for eBay, he was offered a full-time position with the company, where he spent the first eight years leading eBay’s large teams of engineers, fraud department, and payment and billing operations teams, before moving into business roles.

“To make a long story short, I led just about every part of eBay’s business,” Jay said.

As Jay progressed at eBay, Lisa made the decision to transition to the nonprofit world, which she said was a goal she’d had since graduating from GPS.

“My plan had been to work in finance and then transition to nonprofit, as I felt the reverse would be difficult,” Lisa said.

In her nonprofit role, Lisa worked with underserved small businesses, providing microloans as well as training in how to manage a small business. Lisa said she then took a significant career pause to spend time with their three children – a full time job in itself.

“I was highly active in our community, volunteering in the classroom and serving multiple terms on the board and parent teacher associations of our children’s preschool and elementary schools,” Lisa said.

Jay’s position at eBay then took the family to Berlin, Germany, for two years before the family returned to the Bay Area.

Since the early stages of the COVID-19 pandemic, Lisa has worked for Sacred Heart Community Service in San Jose, administering over $75 million in financial and rental assistance to low-income households affected by the virus in a county-wide effort to prevent homelessness. She is also a partner at Silicon Valley Social Venture Fund, which invests in nonprofits for meaningful social impact. Jay serves as the chief operating officer at business-to-business software startup company Inxeption.

Both credit their education at UC San Diego with giving them the tools to succeed in business, both in the U.S. and abroad.

“I’m always using the analytical skills we learned at GPS, assessing the players and their interests as well as financial and/or data analysis,” Lisa said.

“Two fundamental things about GPS that I tell people that made me successful: continued social maturity evolution by hanging around with such intelligent people, and the curriculum focused on quantitative methods, statistics and policymaking processes,” Jay added. “Gaining this ability to understand incentives of actors in my professional career, how they might present – or misrepresent – data for some purpose, has helped me to make the right decisions on what to do on behalf of my customers and business.”

Jay’s advice to current GPS students is to “overcome any anxiety they have and get very involved in everything that’s happening around the school.”

“I did not do that as an undergrad, but I chose to when I was at GPS and I’m super happy that I did,” he said.

And while the challenging coursework might prove stressful at times, Lisa reiterated a simple reminder for current students: have fun.

“You’re lucky to be surrounded by people who have the same interests as you,” Lisa said. “That can be hard to find once you leave school, so make the most of your time together and learn from each other.”

An alumni selection committee reviewed nominations for and determined the winner of the 2021 Outstanding GPS Alumni. Thank you to the following alumni, who represent board and non-board members from different regions and degree programs:
Share
Share