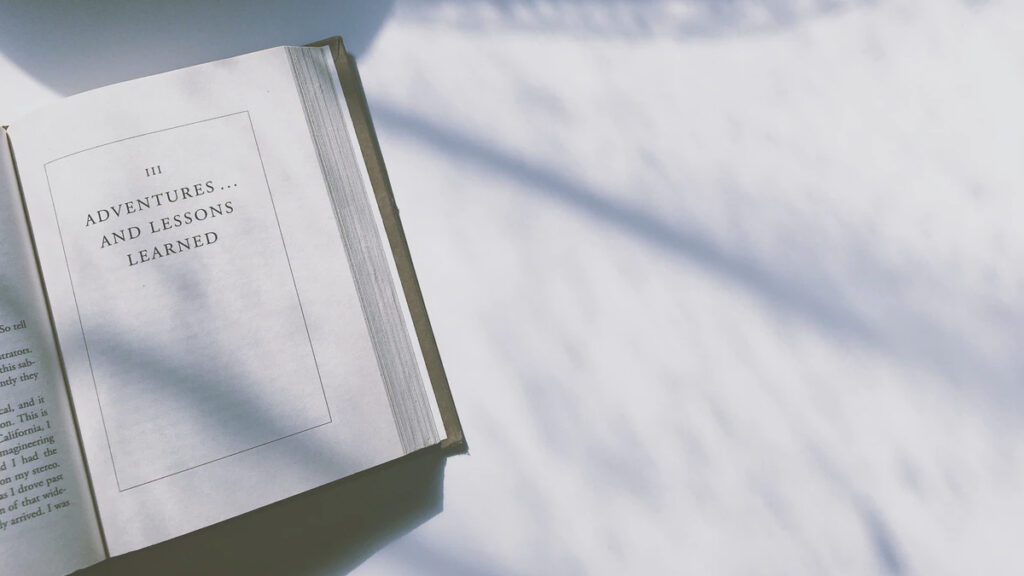 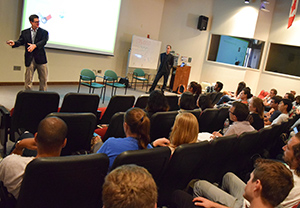 In 1994, Bill Clinton served as president of the U.S., O.J. Simpson faced a major dilemma and unforgettable films such as “Forrest Gump” and “The Lion King” were released. A few students who now attend the UC San Diego School of Global Policy and Strategy (GPS) also were born that year.

But for Rich Abrom ’96, it went down as the year he received his first email address. It was during his enrollment at GPS. A couple of decades later, on a Friday afternoon at his alma mater, Abrom found himself in just about the same spot: Surrounded by incoming students at the School and with a lifelong friend, Joel Rabasco ’96.

As part of the School’s career services orientation, the alumni gave new students a retrospective glance at the twists and turns their careers and the world have taken since they graduated 20 years ago, as well as a few life lessons learned along the way.

“Enjoy the ride as you move from today through the next two years and even through the next 50 years of your life,” said Rabasco, currently director of product management for Capsule, a Qualcomm Life company in San Diego. “Recognize the universe might not have in store for you what you have on your list.

For perspective, Rabasco and Abrom, currently a business lead at Hewlett-Packard Co. (HP) in San Diego, recalled a few of the long-term goals they had in mind as first-year students at the School. Those included to:

While the alumni admit a few of these items remain uncrossed—see No. 4 and 5—they are far from disheartened by their performance thus far.

“There’s always a silver lining,” Abrom explained. “We’re here to tell you 20 years later, it didn’t turn out too badly.”

To that end, the alumni launched into their insights with career advice applicable to students current and former of the School: Do what you love.

“It may not be the most lucrative path of employment or with the biggest company or paycheck,” Rabasco said. “But if you love doing something, you’ll be good at it. If you’re good at it, you’ll be successful. The money and prestige will just come.” 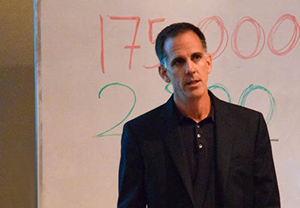 He added, be deliberate about getting to doing what you love. This may mean accepting a job that is your second, third or even fourth pick after graduation. It took Rabasco 15 years to get to a place of content, he said.

Being committed to the service of others versus chasing profits helps, as well, Abrom said, citing Viktor Frankl’s “Man’s Search for Meaning.” Also, be prepared for change and how to adapt to it when you leave the School.

“Failure is a part of life,” Abrom said. “You want to avoid it, but it’s going to happen. Embrace it, take a deep breath, get back on the saddle and keep riding.”

In those moments, it’s important to dig into that personal “edge” most all students gain at GPS, Abrom said.

“This is not some cookie-cutter policy school,” he said. “Feel very good about that.”

Abrom recalled his interview at HP as an example of this, when one of the interviewers began conducting the conversation to him in Spanish on the fly, based on it being Abrom’s language requirement fulfilled at the School. On top of excelling in that scenario, Abrom also was able to reference case studies from the School to play up his business experience in the interview.

On that note, Rabasco identified three fundamental classes from GPS he uses in his job still today.

Finance, he said, is a hard skill in the business world. “Double down, and take as much as you can,” he encouraged.

Policymaking processes, Rabasco tagged as “a part of my DNA now.” Whether it’s interpersonal relationships or weekly meetings, thanks to this course, Rabasco said he has an understanding of how organizations and people make decisions, what their motives are and how they might behave in one scenario or another.

Political science also helped him hone an awareness of people’s perceptions in other parts of the world and develop a geopolitical sensitivity, to some extent.

“You can’t understand what makes a person tick unless you understand their country, where they’ve been and the struggle they’ve had,” Rabasco said. “Political science gave me a very solid footing.”

It’s an awareness in line with the importance of emotional intelligence in the workplace, which Rabasco said is more important than IQ.

“Just by definition of being here, you have the IQ,” he said. “You need to develop personal skills. They don’t come naturally for everybody.”

Abrom of all knows this to be true. After all, Rabasco helped him get in the door at HP.

“Your future job starts now,” Abrom concluded. “You are now networking here and will be for the rest of your life.”