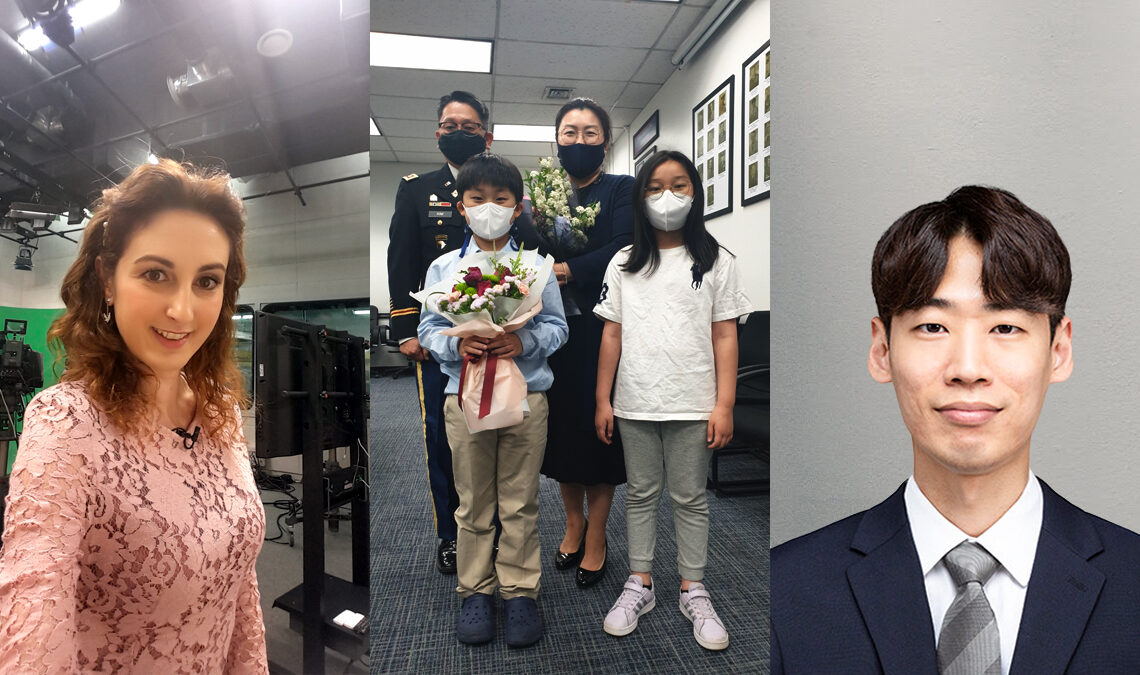 GPS prepares students for a wide range of careers in Korea, one of the choices as a regional focus found in many of the school’s degree programs

The UC San Diego School of Global Policy and Strategy (GPS) is known for its Pacific focus, and many of our alumni aim to live and work globally. For students interested in living and working in Korea, GPS provides top-notch training for a variety of fields through teaching and public programming.

GPS News caught up with a number of recent GPS alumni living in the region to share their experiences.

Cristina Confalonieri graduated from GPS in 2019 with a Master of Advanced Studies in International Affairs (MAS-IA). Confalonieri said her desire to learn more about east Asian international affairs and her love of languages drew her to the program.

“Thanks to my international background – I was born in Italy, spent my late childhood in Belgium, went to college in the States and lived in South Korea – I know how much languages contribute to developing an open-minded approach,” Confalonieri said.

Confalonieri now lives in Seoul, South Korea, and works as both a TV and radio broadcaster as well as a senior Italian and French instructor at Language Bird, an accredited online language school based in California.

“I realized that through teaching languages I would be able to fulfill my soul’s craving to bring together people from diverse cultures and help them to better integrate in this increasingly globalized world,” Confalonieri said. “It gives me great satisfaction to see my students acquire new dimensions to their outlook on the world once they can see it through the lens of a different language and culture.”

In her broadcasting role, Confalonieri regularly hosts TV shows about cultural diversity and multicultural families. She said her time at GPS helped her to gain a better understanding of the global implications of east Asian relations, and South Korea will always hold a special place in her heart.

“Korea combines modernity and traditions, local and global, bitter and sweet,” Confalonieri said. “Whatever you decide to do – join the BTS fan clubs and spend time in a BTS themed café, visit ancient Buddhist temples in the mountains, shop in the most modern skyscrapers or go for a tour to the Demilitarized Zone on the border with North Korea – this country will not disappoint you!”

Confalonieri said she works to keep in touch with many people she met through the school.

“After graduation, I met my bestie from GPS (Ashley Kisselman) in Italy right before the pandemic, in February 2020, since she was living in Spain at that time. It was a lovely reunion,” Confalonieri said. “I am also in touch with many Korean students I met at GPS, but we’ve only talked on the phone because of the pandemic. Hopefully I will see them in person soon.”

Jason S. Kim earned an MAS-IA from GPS in 2015. He sought out the program because his job as a U.S. Army Foreign Area Officer (FAO) required a master’s degree in international relations with a regional specialization.

“Part of my Army FAO training pipeline was to pursue a graduate degree, and as a UC San Diego undergraduate alumni, where I got a B.A. in economics, I knew GPS had a great graduate program in international affairs, especially focused on Asia-Pacific regions,” Kim said. “It was a very easy decision to pursue a master’s degree at GPS.”

In his current role, Kim works as a political-military staff officer in the Strategy, Policy, and Plans Directorate of the United States Forces Korea (USFK).

As an immigrant from South Korea, Kim said joining the U.S. Army was the best life choice he has ever made.

“The most rewarding part of my job is that I get to be part of the U.S. national strategy to build and strengthen strategic alliance and partnership,” Kim said. “As a Korean-American and a U.S. Army FAO, I work on the U.S.-Korea Alliance’s advancement toward achieving the common goals to preserve and protect our shared values. As a soldier, I feel that I am doing my share as a citizen.”

Though Kim is originally from Korea, he said his time at GPS prepared him academically for living and working in the region, providing the opportunity to study complex issues and share ideas freely with other students.

“I learned to look at things from different perspectives and got to hear about Northeast Asia problems from Chinese, Taiwanese and Japanese perspectives by studying together with many students from those countries,” Kim said.

In one course focused on eastern Asia, Kim recalled a team project about South Korea-Japan relations, where his team discussed the historical and territorial disputes between South Korea and Japan.

“I got to brief the topic from a Japanese perspective, while a Japanese student, who was a Japanese government official in the Ministry of Economy, Trade, and Industry, briefed it from a South Korean perspective. Although I am a U.S. Army officer, it was a great opportunity as a Korean-American to see the same issue from a very different perspective,” Kim said.

Kim, who currently lives in Seoul, has been assigned to his current position since July 2020. Though traveling has been very limited because of the COVID-19 pandemic, he has taken full advantage of the city’s walkability and has still had the opportunity to see different parts of Korea.

“I love that most places are within a day-trip distance and are very kid- and family-friendly,” Kim said. “My family took many day trips to mountains and oceans nearby whenever we could.”

Kim resides in an area of Seoul called Yongsan, near the U.S. Army base and in close proximity to many delicious restaurants, grocery stores and shopping malls with movie theaters. During the lockdown periods of the pandemic, Kim said he relied heavily on Seoul’s delivery services.

“The delivery system is probably the best in the world, and it contributed to maintaining my sanity during the COVID-19 pandemic period,” Kim said. “You can simply order anything online, and your items will be at your door within hours. For food deliveries, it only takes 10-30 minutes for most orders.”

Jae Ho Lee is a 2019 graduate from the Master of International Affairs (MIA) program, with a specialization in international development and international politics and a regional focus on Korea and Latin America.

“Before coming to GPS, I had an internship at UNHCR Korea, and I got more interested in solving humanitarian issues in developing countries,” Lee said. “I believed pursuing the MIA degree, focusing on international development and politics, would allow me to learn deeply about current humanitarian issues in developing countries and how the actors are working to resolve the issues.”

Though Lee has now moved on to seek other job opportunities, his first position after GPS was as a refugee status determination officer at the Seoul Immigration Office under the Ministry of Justice of Korea.

“The best part of the job was the opportunity to communicate with asylum seekers and sympathize with the pains that they went through,” Lee said. “It was rewarding for me to make proper legal judgment to assist those who left their countries to escape human rights violations.”

Lee said that the classes he took at GPS strengthened his knowledge on humanitarian issues, along with helping him to develop practical skills like Stata, effective research processes and memo writing.

“With assistance from the Career Services team, I was able to have an internship opportunity at UNHCR HQ in Geneva during summer 2018, which was a critical aspect of my resume when I applied for the position at the Ministry of Justice,” Lee said. “The amazing quality of the lectures from the professors and the practical assistance – like helping me write my resume and preparing me for my interview from Career Services – were very helpful for me to acquire the position at the ministry.”

Lee currently resides in Seongnam, Korea, approximately 20 minutes away from Seoul by metro, where he has lived since he was 9 years old.

“It is really easy and fast to reach Seoul from here by using bus, metro or car, and for me, Seongnam has almost everything that Seoul has – big firms, department stores, places to hang around with friends – and yet the population of the city is lower than Seoul,” Lee said. “Basically you can enjoy both a peaceful environment as well as vibrant city life in Seongnam.”

Lee said he has maintained close ties with other GPS alumni, particularly those who live in Korea.

“Right after graduation, alum Miso Park and I studied and prepared together for our careers in Korea, and even these days, we still maintain our relationship and hang around together when we have the time,” Lee said. “While I worked in the public sector, Miso is currently working in the private sector, so we like to share the pros and cons of each sector, which is very helpful for me to prepare for my next job.”

By Virginia Watson
5 Mins read
Knowledgeable career professionals set GPS students up for success, directing students toward the best internships for their career interests and helping them launch their careers post-graduation
AlumniFacultyResearchStudents