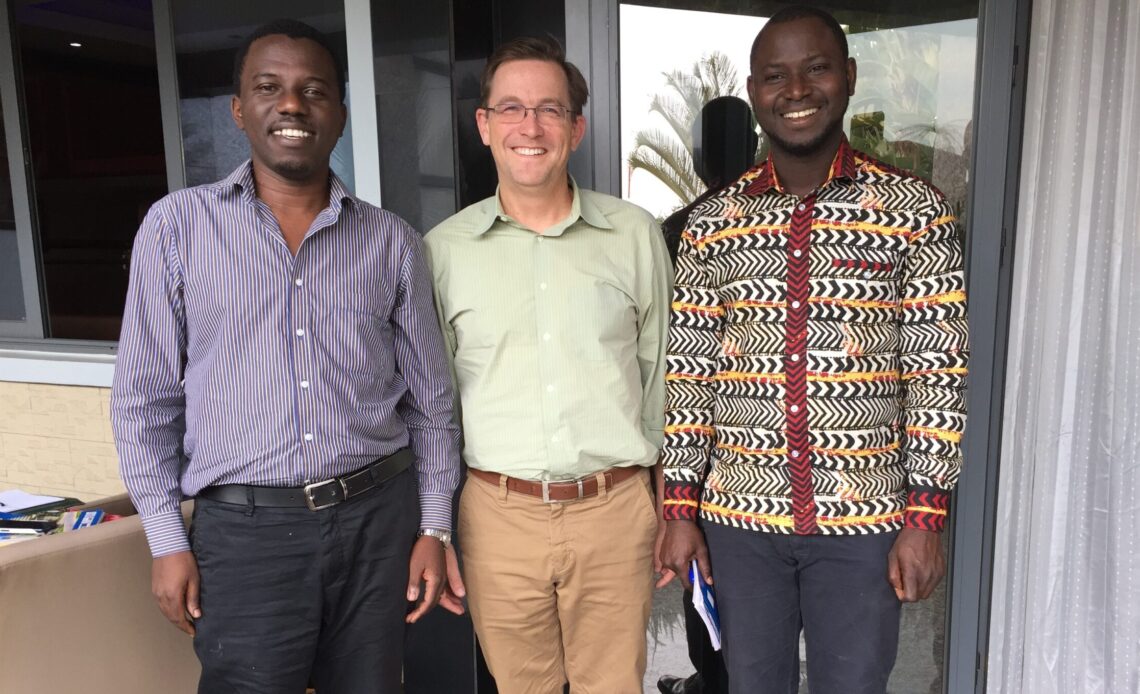 Craig McIntosh, center, in Rwanda with Leodomir Mfura (left) and Marius Chabi (right) from Innovations for Poverty Action, who ran the fieldwork for his studies in that country. | Submitted photo
PDFPrint

Craig McIntosh has spent his academic career in development economics, or the study of how poor countries grow.

“I am a microeconomist, meaning that I’m mostly interested in getting down to the individual or household level to understand the constraints that people face in making their economic lives better — and how those can be alleviated with good policy and institutions,” McIntosh, a professor at the UC San Diego School of Global Policy and Strategy, said.

McIntosh’s research has taken him around the developing world, particularly to the East Africa countries of Uganda, Rwanda and Tanzania. In his time at UC San Diego, he has also expanded his projects into Latin American countries like Mexico, Uruguay and Guatemala. In these studies, McIntosh’s research has often focused on the demographic of young women in these economies.

“In many ways, what makes development economics interesting is that it is the study of places where markets don’t work and where individuals face serious obstacles that are deeply inefficient in terms of their ability to lead productive lives,” McIntosh said. “Few people face more obstacles than adolescent girls in the developing world, and — particularly given the tremendous population growth still to come in sub-Saharan Africa — adolescent girls there really hold much of the demographic future of the human race in their hands.”

Understanding how to help these young people achieve productive lives and to exercise choice over the core decisions that they make in their transitions to adulthood is something that should concern us all, McIntosh added.

McIntosh, who recently returned from sabbatical at the Center for the Study of African Economies at the University of Oxford, is deeply involved in a number of large-scale impact evaluations with the U.S. Agency for International Development (USAID). While at Oxford, he worked to launch a couple of big new evaluations of USAID anti-poverty programs in Malawi and Zimbabwe.

“This is such an important organization to the global flow of development funding,” McIntosh said. “Working with them to make their programming more evidence-based is a real privilege.”

“All four of these classes help students apply rigorous, quantitative, analytic methods to important policy problems in development and the environment,” McIntosh said.

This is “a very exciting time” in terms of academic development economics, McIntosh added.

In the global development picture, McIntosh said there is a bit of a “war of ideas” between state-centric, infrastructure-heavy development models, like those driven by China, and  decentralized, empowerment-focused and microeconomic set of measures, being driven by the major western multilateral donors.

“All of this emphasizes the deep questions: what do we mean by development? How much of this is a narrowly economic issue, and how much, in the words of Nobel prize winner Amartya Sen, is development really about the expansion of human freedoms?” McIntosh added.