A day in the life at GPS 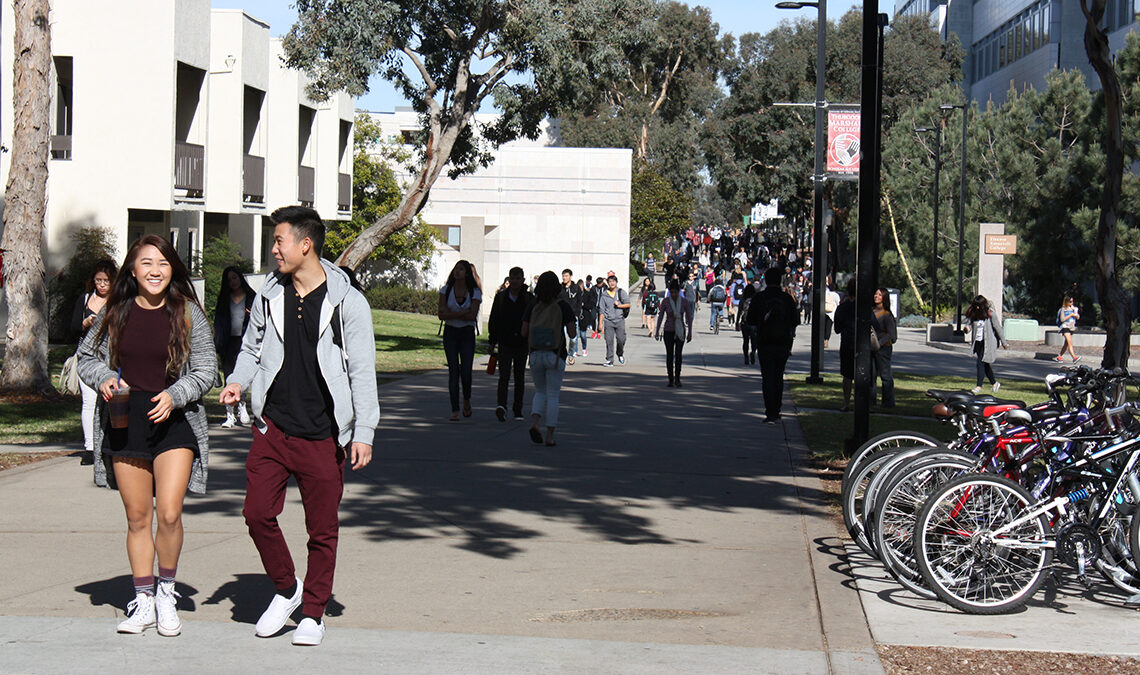 In a Q&A complementing to our Storify tour of a day in the life of Emily Foecke, the current student paints a picture of what attending GPS looks like today 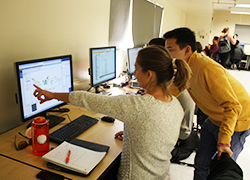 The longest table at Home Plate, UC San Diego’s popular campus eatery, is packed. Sunglasses and notebooks are strewn atop it, and backpacks and purses are slung on chairs. Assistant Professor Lauren Prather is opting to hold her final Political Economy of Foreign Aid class of the quarter outdoors against a mountainous backdrop versus inside with a whiteboard—it’s almost finals week, after all.

Among the students seated at the table are Emily Foecke, master of international affairs candidate 2016. She interjects in the seminar discussion about her first-hand experience doing development work in Sierra Leon before attending the UC San Diego School of Global Policy and Strategy (GPS), grabbing her classmates’ attention in detailing the qualitative evaluations used in her job. What they might not know is the lack of math in those evaluations is precisely what brought her to GPS for graduate school.

“The quantitative emphasis was the draw,” she said. “It’s essentially here that seriously teaches numbers and econometrics.”

In complement to our Storify tour of a day in the life of a GPS student, we also asked our subject, Foecke, a couple of questions for more perspective on what attending GPS entails today.

Is there anything you wish you knew as a first-year student that you know now?

EF: How much better it is. Working hard in the first year and all that suffering pays off. Your professors notice. You don’t think they’re watching, but they are. I picked up on that more so in the second year, and I wish I would have known that with certainly in the first year. You get way more opportunities if you put your nose to the grindstone.

But also know in the first year the curve actually is there to save you, and you can have a lot of fun. It’s OK to make friendships, not feeling a need to truly spend 100 percent of your time on school. It can be 75 percent school, 25 percent social. We learn so much more from each other in some instances than from our professors.

Another thing is how close the mountains are to here. I had no idea you can drive only 90 minutes and be in the San Bernardino mountains and the San Jacinto wilderness. It’s beautiful. I didn’t get out until February last year, and I couldn’t believe I’d been missing out the whole time. I love hiking, mountaineering, backpacking, camping—all of it. I was worried it would be really urban feeling here. I know that’s appealing to a lot of people, but I was kind of worried I wouldn’t see any trees other than palm trees. But it’s totally not like that. That you can drive such a short distance and be in the mountains makes the School so attractive.

Do you have a favorite place to study on campus?

EF: I have watched the sun rise and set from the computer lab (laughs). There are some secret study spots I’m not allowed to verbalize. Every student figures out quickly where you can get a quiet space with a full view of the ocean. Last year, I studied a lot at Home Plate. I think it’s unique to have a place close to campus where you have outdoor seating, and it’s beautiful. You can see the mountains in one direction, the ocean in another direction. It’s such a natural gathering place. You can show up and there will be at least 10 other GPS students. It breaks through the peer-academic boundaries. Professors show up there sometimes, too. Last year, I got to know Professor David Victor, for example, because he stopped by Home Plate after our midterm and casually had a drink with us. I’m a big fan of that.

Is there any professor you most look forward to bumping in to or attending class?

EF: I have so many favorite professors now. For example, Professor Jesse Driscoll is one of the best teachers I’ve ever had. He teaches this Geopolitics, Insurgency, and Weak States class, which I would never have chosen to take other than the fact I needed another class. I just happened in it. Now, he’s made me see this class as anyone studying development should have to take this class as a requirement. It’s so profoundly affecting about the way you understand the world and why places are poor and why countries have formed the way they have, especially having a background working in Africa. There is a surprisingly strong global health core of faculty here, too, and I focus on global health. Professors Joshua Graff Zivin, Jennifer Burney, Gordon McCord and Craig McIntosh’s work all have a global health component to it.

Where do you hope to be after graduation?

EF: I had a good research experience over the summer at the Center for Strategic and International Studies (CSIS), researching global health policy. I did a lot on Ebola and drug-resistant malaria in Miramar, focusing on active conflict zones in the border regions. And then did some other work through the bipartisan policy center while working for CSIS on HIV/AIDS and state stability connections to national security. I loved the research over the summer. It was amazing.

Previously I thought I’d work for U.S. Agency for International Development in Washington, D.C., and be an implementer, spend like 10 years working in the field. I can’t imagine not doing research now. This is so boring (laughs), I love being behind a desk. It’s so strange, but being behind a desk in a way where the whole job is learning. You get to be in school permanently, read books, learn more about a subject and then your job is realizing profound new things that make policymakers want to do something. That’s awesome. I know a lot of people don’t think of it like that. 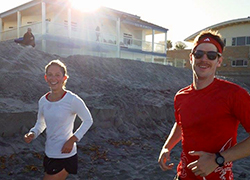 Where can we find you when you’re not on campus?

EF: I’m at the rock climbing gym probably four or five times a week, depending on my schedule. I’m a big runner, too. This year I’ve been getting to know running paths around the city more through Women Going Global Friday runs. There’s always a group of at least five of us who run every Friday morning. Professor Barbara F. Walter sometimes comes. Getting to go on a run with someone like Walter … that’s cool. We also started to do intermittent beer runs. We park our cars, go on a run and then have a beer after in a brewery. This year since I started doing these runs, I’ve gotten to know 10 of my classmates who I encountered only briefly last year. They are awesome people I wish I would have gotten to know earlier.

I don’t think I do anything else interesting. … Oh, I go to the beach. Duh!

Visit Storify to see a typical day in the life of Foecke.

Maintaining a work/life balance as a master’s student

By Virginia Watson
3 Mins read
Morgan Furr talks soccer, building connections with your cohort and the importance of sticking to a schedule
AlumniCareersEventsFacultyStudents